Quarantine Reading: I Am My Own Woman and Never, Ever Ever, Coming Down 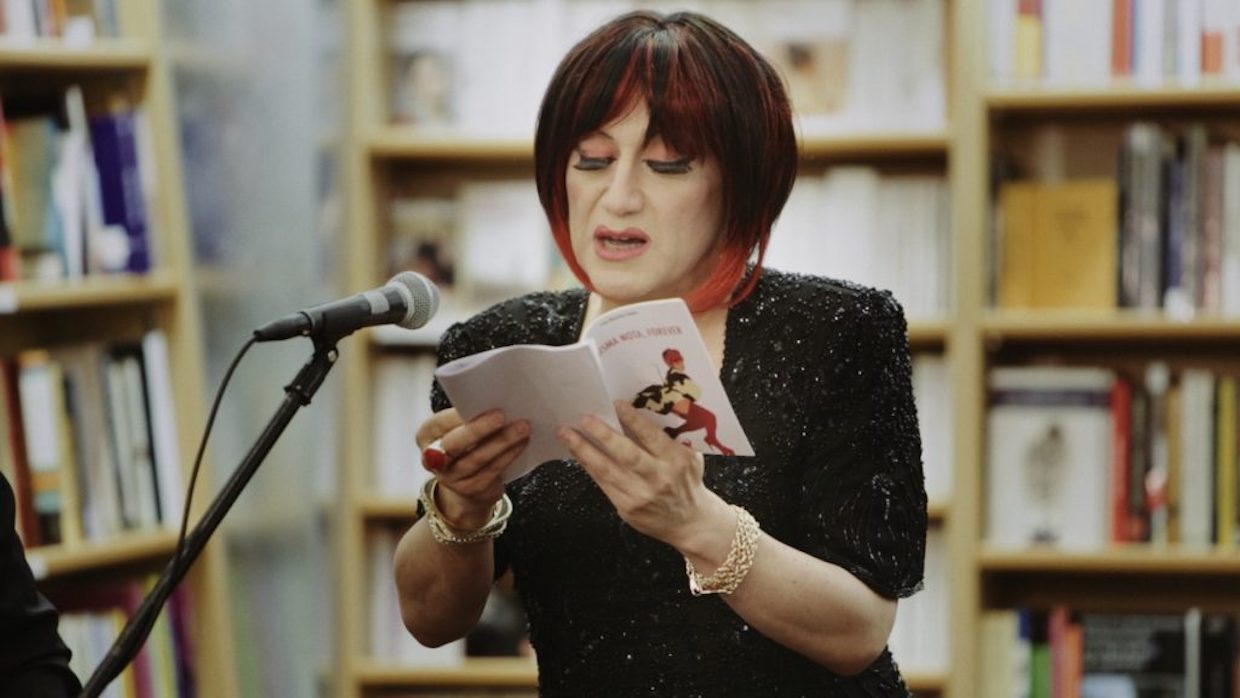 Iván Monalisa Ojeda in The Voyage of Monalisa

by Jessica Dunn Rovinelli
in Filmmaking
on Apr 2, 2020

As a publication about film, we find ourselves in the peculiar position of publishing during a moment when theatrical access to movies, and their ongoing future, is as much in question as everything else. During this suspension of normal filmwatching habits, we’ve reached out to contributors, filmmakers and friends, inviting them to find an alternate path to the movies by participating in a writing exercise engaging with any book about or lightly intersecting with film, in whatever way makes sense to them. Today: Jessica Dunn Rovinelli on two trans autobiographical books turned into doc films. — Vadim Rizov

Every book-to-film adaptation requires new aesthetic frameworks to address questions of emphasis and the new relationship between the viewer and text/image. With documentary films adapted from autobiographical writings, a somewhat rare but thriving niche, these questions take on a different flavor and urgency. In the case of two written works by transgender authors and turned into documentary films by cisgender directors—one recent, one not so much—books focusing on their own quixotic micro-fixations lead to films in which polyphonic concerns jostle for attention.

In this case, I’m considering two (semi-)autobiographical writings by two very different transgender writers, separated by a gulf of time, nations and political contexts, both used as the basis for documentary films about their authors. The first—Ich bin meine eigene Frau (I Am My Own Woman), published in 1992—is by the German author Charlotte von Mahlsdorf, which was also the basis for a play. Her life is spent in Germany, surviving through the Nazi era to the beginnings of the German gay rights movement. It was adapted in 1996 into a documentary film of the same name by Rosa von Praunheim, best known as the early German gay cinema director of the seminal It Is Not the Homosexual Who Is Perverse, but the Society in Which He Lives (1971). The other, published in 2016, is Never, Ever Ever, Coming Down by Iván Monalisa Ojeda, an undocumented Chilean trans feminine person who currently resides in New York City. It presents a series of short stories taken from his life, in which she details nights and sometimes days of heavy drug use, fleeting moments of romantic intimacy and sex work. (The author uses male and female pronouns interchangeably throughout.) His life was documented in the 2019 film El viaje de Monalisa (The Journey of Monalisa), the debut feature of the New York-based Chilean director and actress Nicole Costa, in her first widely-screened work.

In both written works, a diaristic form is combined with a fairly huge disinterest in the questions of identity, transition and selfhood so central to much work by and about transgender individuals. Despite its title, the question of womanhood is not the central through-line of I Am My Own Woman. It is, in the final appraisal, a work about antique furniture (truly!), specifically from the Gründerzeit period in early 1900s Germany and Austria. The novel begins with von Mahlsdorf’s childhood and apprenticeship with an antique salesman. As it proceeds through the Nazi era and its aftermath, I Am Not My Own Woman devotes far more pages to descriptions of furniture, the collection of furniture, the restoration of furniture and, later, the bureaucratic nightmares of running a furniture museum, than any of the questions its title might imply. It is the story of a woman in relation to the history of a nation, who rescues pre-Nazi furniture and cherishes it, who tries to bring it into the present in all its specificity. It is an ode to the curves and lines of Gründezeit craftwork, as woven through the life of a woman who must navigate her own relationship to her family, body, and nation in order to maintain her relationship to furniture. Identity, or lack thereof, enters into her autobiography mostly in relation to her relationship with her transgender male “aunt,” who dresses her, explains the existence of homosexuals and gender-divergent persons, and aids in defending her mother from her abusive father. von Mahlsdorf’s existence as a transgender person is, in her mind, reduced simply to a woman in a man’s body who prefers to wear women’s clothing and not be questioned further. Transition is never on the table given historical, cultural and personal circumstances. This gender role is also linked in many ways to her role as a passive partner into BDSM homosexuality with men, the two interwoven rather than split. At another moment, she is imprisoned rather than sent to war as a Nazi soldier on the basis of her gender expression. This moment is curiously underplayed in the autobiography, which focuses more on her escape, as the prison is bombed and she is able to wander out of its collapsed wall—and, charmingly, immediately begins collecting furniture.

In its adaptation, von Mahlsdorf’s story must merge with von Praunheim’s concerns and cinema. As such, the film cuts between then-contemporary footage of Mahlsdorf maintaining her Gründezeit museum with the help of a lesbian couple and reminiscing about her life, and heavily art-designed staged sequences depicting von Malhsdorf’s life in von Praunheim’s signature camp-influenced aesthetic. The non-existence of a traditional “transition” with medical intervention having never entered into von Mahlsdorf’s life complicates the possibility of a traditional trans narrative, but then, so does the time of its filming in the ’90s. As such, the film oscillates wildly between a gentle, observational style of documentary in the present day footage and a coming-of-age narrative built out of staged recreations shot in von Praunheim’s signature heightened camp aesthetic. The present-day footage lingers on her relationship with her accepting lesbian assistants and the LGBT organizing von Mahlsdorf facilitates on the grounds of the museum she lives in and maintains. The recreations follow a homosexual male sexual awakening arc recognizable from von Praunheim’s other features, even as Nazi-era chaos provides heightened situations and cuts apart a clean narrative. In von Praunheim’s version, performativity of gender and the specifics or organizing take center stage, with von Mahlsdorf’s physical presence—shockingly beautiful and gentle—given the primary stage. The transgender body, as it so often does in film, becomes the figure of fascination, but here it is also a locus through which history passes: in the clothes she wears, the people she brings together and the history of her life.

In 2016, Iván Monalisa Ojeda writes in the face of a cultural history that has learned, for better but often for worse, its own narratives of transgender existence—and so, she dodges. Where von Mahlsdorf had chairs, Ojeda has an endless night and fleeting day of locas, travestis, drugs, sex, booze, sex work, rent, passing affairs, slightly longer affairs and taxis. He burrows into the everyday perverse, the minutiae of a life lived tearing around New York’s streets in a crystal meth lightning bolt. Gender and orientation are ever-present, but they so saturate her writing that they become beside the point, use-value for a given sexual situation or monetary exchange. This is fevered and beautiful minimalism and pointillism. We never hear of transition as a process: we hear of boob jobs, of a woman who finally looks exactly like the Chilean singer she idolizes, of heels that will get you the tips you want when you know you’re looking for a guy who’s into BDSM—a writing of endless specificity.

Nicole Costa, who deserves an enormous amount of credit for her role in facilitating the publication of Ojeda’s writings, finds herself documenting the author of these words. Understandably, Costa solves this by letting the words themselves take up a fair deal of screen time, littering the screen with his writings and readings. At the same time, she too is making a film in an era that presumes to know what a transgender narrative is. Furthermore, she cannot document the specific moments Ojeda’s autobiographical writings describe, fleeting and clandestine as they are. She wisely makes use of extensive and often explicit video recordings made over the years to fill the gap, but they’re fragmentary in a less focused way, than his writing, brief glimpses into wild half-forgotten nights rather than Ojeda’s fevered, emotionally rapt prose of glances, cocaine bumps, and kisses. A documentary film, as the market understands it and as most biographical documentaries dictate, needs a narrative, and Ojeda’s transition, as is so often the case, fills the gap. Luckily, here this transition can only take the form of getting a “female” marker on an ID, as Ojeda has already medically transitioned, and not in a conventional or easily mappable way—her inconsistent use of hormones and disinterest in surgery wonderfully out of sync with broad cultural understanding contain in the phrase “Male to Female.” That same “F” marker comes tied to Ojeda’s movement from undocumented to documented. It is also a film of resurfacing—Ojeda was known to small circles in Chile before essentially disappearing from the eye of the art world for decades—and Costa documents this return to a world of “art culture” in both Chile and New York. Costa at once maintains the arc of transition while tying it to other movements between nations and markers that are linked to the specificity of Ojeda’s life. At the same time, the filmed version is an entirely different creation than Ojeda’s writing, even more so than von Praunheim’s version of von Mahlsdorf. It documents a coming-out into a literary world, with the literary material itself providing emotion and context, but tells a very different and more universally legible story of Ojeda’s life.

Neither film should be written off as bad—quite the opposite. Both are interesting insofar as their directors find their own ways of navigating through a story written by and about an author whose works often seem to be evading the content for which audiences come to them for. Each director offers up aesthetic tendencies that present an often interesting melding of artistic and social perspectives, and each offer up fascinating looks at how a literary presentation of one’s own life survives and re-maps a documentary adaptation of that same life. These are films in quietly turbulent dialogue with their subjects—Ojeda, in particular, would have no issues with being described as a turbulent person. At the same time, there’s a fascinating pull of the mundane or the hyper-specific in the written works that escapes representation by the (cis) camera. Is there a documentary cinema that can account for this mundane? Is there a documentary cinema, particularly one of the transgender person, that can escape into the image, into the word, into the breast, the drink, the filling cabinet or the cupboard? Can the body live outside the cultural narrative of its transformation? I hope so.