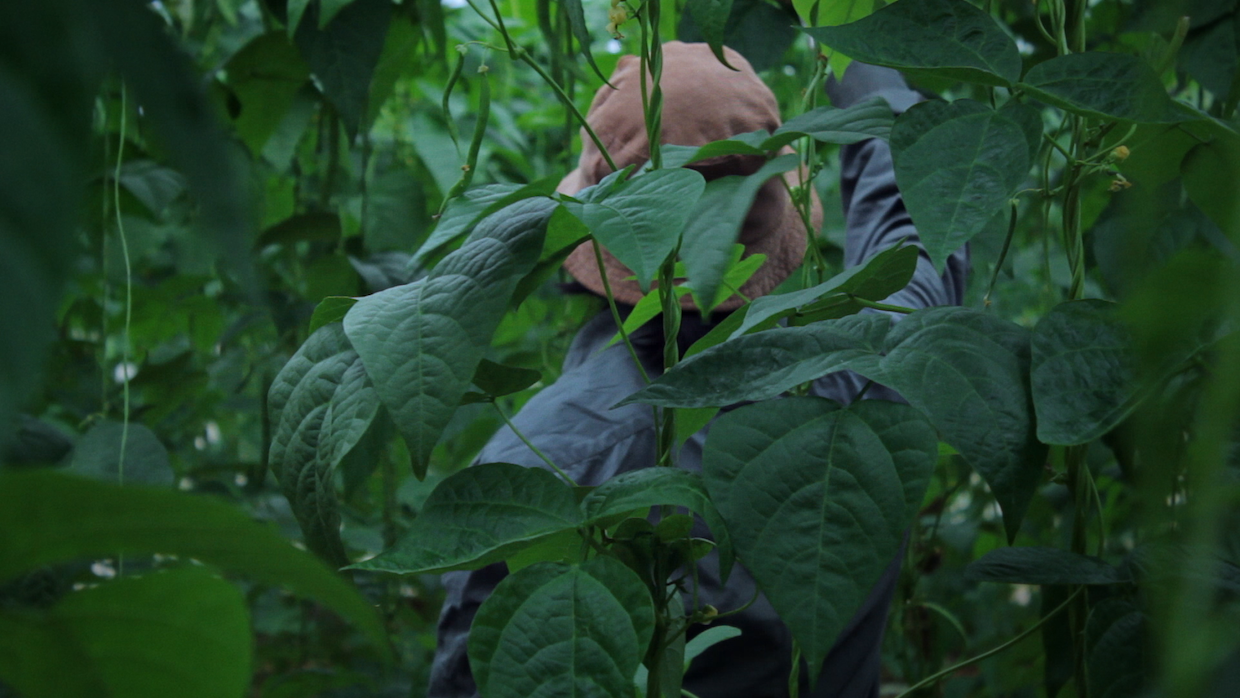 Allison Chhorn in The Plastic House

The public-facing side of Visions du Réel 2020 has ended and, as far as I can tell, under the circumstances it’s a success. Variety reports that 95 out of 97 features went online; one of the abstainers simply couldn’t get their post done in time after the lockdown hit. In the regular international feature competition, Eytan Ipeker’s The Pageant is the rare film as infuriatingly outrageous as promised by its surprisingly unambiguous festival description (credited to selection committee member Emmanuel Chicon):

Beauty contests, with their proven sexist aspect, can irritate. But that which has been taking place since 2012 in Haifa can arouse horror. Sponsored by the International Christian Embassy Jerusalem, a right-wing evangelist organisation, and a great supporter of the annexationist policy of the current leader of the Likud party, this competition aims to elect a “queen” chosen among women living in a retirement home that only accommodates survivors of the Holocaust […] the behind-the-scenes of a show that exploits the survivors of the Shoah in the service of ultranationalist ideology.

This unambiguous interpretation of The Pageant‘s meaning isn’t wrong, though it’s far more blunt than the experience of watching it. The idea of an event called “Miss Holocaust Survivor Beauty Pageant” seems so self-evidently dystopian that not even Southland Tales would have thought to include it, and my first reaction wouldn’t certainly align with the cheery evaluation of Ted Thornhill, filing for the Daily Mail on the 2016 edition documented in Ipeker’s film: “These women show that joy can come from even the darkest of experiences.” My skin was crawling from the first scene, where two women from the Haifa Home for Holocaust Survivors haggle at a store to bring down fabric prices: it takes them almost no time to get to “we’re representing Holocaust survivors, and they deserve a a discount.” That’s the kind of statement you argue with at your own risk, even as it’s transparently leveraging genocide for a 100-shekel (roughly 28 USD) price slash. The sponsor of both the pageant and retirement home, International Christian Embassy Jerusalem, is an evangelical organization whose support for the nation of Israel and recognizing Jerusalem as residing within its borders is implicitly tied to those being preconditions for kicking off the Rapture. ICEJ’s motives, and the terms in which they coach their fundraising appeals, are not to be trusted. (*)

The Pageant documents ICEJ reps’ statements at public events but they’re otherwise unseen, the film confining itself to the Haifa Home’s participating residents and the nonprofit’s employees. Setting aside the obvious optics unease that comes from, say, watching Holocaust survivors being assigned numbers and told to stand in line, there are subtler dimensions of discomfort. Not all the participants are sure this is a good thing: one says she knows it helps pay for their home, so it’s a necessary evil they put up with. Maintaining a worthily-intentioned nonprofit via support from dubious donors and questionable fundraiser galas is obviously not a unique dilemma. Still, it’s one thing to abstractly know that and another entirely to watch a survivor get upset that her account of survival, which will introduce her on-stage, has been edited down to exclude a sentence she finds crucial. She’s brusquely rebuffed: her longer statement’s in the program, they can’t include every detail of her story in the short pageant version, discussion over.

This is the opposite of the Shoah Foundation’s model of recording survivors’ testimony at untruncated length for future reference: the pageant gets it down to a snappy five-sentence recap of tragedy, a list of each survivor’s hobbies (the contest organizer says this list—watching movies and TV, for example—will give an example of the true passions that survived and transcended the unthinkable), and a request for their statement to future generations. Many of these are, unsurprisingly, brief testimonies to each woman’s gratitude for Israel, one of which is interrupted by the sudden arrival of Benjamin Netanyahu’s wife Sara and the attendant call for applause. But if all this seems like the especially egregious shoehorning of tragedy into optics-friendly bullet points, it’s still hard to miss that some of the contestants are visibly enjoying themselves, and who exactly would like to tell them that’s wrong? Making the ethics even harder to parse, it’s hard to visibly interpret many of these women’s faces, because aging and the tremors that can come with it mean they often involuntarily appear to be repelled by what’s being asked of them, only for a deliberate, consciously-manifested smile to undermine that initial impression. Epekar’s film is formally accomplished in textbook, arthouse-approved ways: the unpleasantness of watching a fittingly ugly color palette is softened by smart use of off-screen space to surprise or smart framings of the tableaus created by arranging contestants in various configurations. That formal adeptness is important, but the movie’s lack of final ethical conclusion, in a situation where no definitive or even partial judgment seems possible, is what lingers even more than the clearly outrageous moments of tastelessness.

Allison Chhorn is the writer, director, cinematographer, editor, sound designer and main performer of The Plastic House, a 44-minute work primarily about a young woman living and working alone, maintaining her late parents’ greenhouse. The greenhouse is real, as is the labor, though Chhorn’s parents are in fact alive and well. “Spending so much time in there, I naturally imagined what it would be like if they had passed away, and I was left alone to continue the work that they had left,” Chhorn told The Adelaide Review. I’m struck by the word choice of “naturally,” because to me this is not necessarily an intuitive train of thought, but the results are lovely and productive. Much of the (admirably terse!) running time consists of meticulously composed, textbook slow cinema shots of Chhorn at work in the greenhouse, an ideal site for this kind of formal exercise: hanging lines and rows of plants, geometric grids that can be imaginatively reconfigured onscreen.

The one-person-debut discipline brings to mind Chantal Akerman’s Saute Ma Ville, another solo one-location exercise that builds to a far less tranquil conclusion. With its melancholy mediated through repetitive manual tasks and an extremely pleasant, well-mixed soundtrack of ambient gardening sounds, Plastic House is almost literally meditative. Mixing this sharp, “present-day” footage with “older” (?) consumer-fidelity footage of the greenhouse when Chhorn’s parents where there, Plastic House finds some ingenious visual transition possibilities in between Chhorn’s jacket, bedroom blanket (a movie like this would almost be incomplete without some sleeping scenes) and the tarp covering the greenhouse that diffuses the sky—three melancholy shades of blue spilling in and out of each other. I’ve gone back and forth over the years on just how much more slow cinema shots of people walking through forests I have room for before the concept totally runs out of new images. The timing helps, but Plastic House feels both familiar (and hence comforting) while also freakishly of the moment, and therefore new, replicable and safe solo filmmaking for a period of prolonged isolation. Chhorn has, inevitably, clocked this: “I made this film in isolation, never thinking of its afterlife,” she writes. “In light of the current pandemic, I hope it raises some timely questions – How do you continue to live and work in isolation? What memories do you keep of loved ones when they’re not around?”

* I’m not pretending to adhere to the false “gotta hear both sides” standard, but it’s not super-fair to the film to drag the ICEJ’s more recent activities into this review’s main body. Nonetheless, it seems worth sharing some of a March 27 blog post, “The Spiritual Root of the Coronavirus”, written by the organization’s David Parsons:

Mankind has erased the line between us and the animals established by God in Scripture […] ever since the mainstream acceptance of Darwinian evolution, which coincidentally started around 100 years ago, much of humanity has abandoned this core principle of Scripture. We have denied the existence of God, taught only Evolution in our schools, erased the line between us and the animals, and now are paying the price. So we should not be surprised when diseases lurking in animals suddenly start infecting us at alarmingly new rates. […] Darwinian evolution [is] a direct refutation of the divine origin of man. Instead, it erases the line between humans and animals and says we came from them. Among the spiritual consequences of this violation of the divine order is that we have opened ourselves up more and more to sickness and diseases lurking inside animals. And this pandemic is but one of the many birth pangs – with many other causes – which will usher the world into the Messianic Age.↩