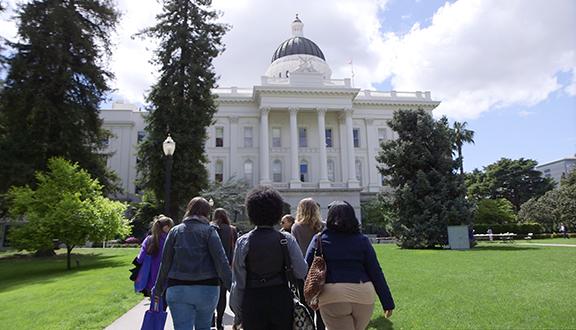 Belly of the Beast

This year’s Human Rights Watch Film Festival, streaming nationwide from June 11-20, is chock-full of impressive cinematic gems that delve into a wide variety of important topics woefully underrepresented onscreen. Beginning with opening night’s Belly of the Beast, the latest from Emmy and Peabody Award-winning filmmaker Erika Cohn (The Judge), which shines a light on the involuntary sterilizations running rampant in our US federal prison system, the fest continues to express its commitment to strong films by and about women. Most notably there’s Juliana Fanjul’s harrowing Radio Silence — which trails longtime journalist Carmen Artesegui in her dangerous fight to return to the airwaves after being censored by the Mexican government — and Claudia Sparrow’s inspiring Máxima, a portrait of the indefatigable, environmental Goldman Prize winner Máxima Acuña. (Acuña, who in the face of death threats and criminal prosecution continues to fight to save her Peruvian home from a mining conglomerate, also has the most memorable comeback line of the lineup. In response to the company’s attempts to buy her off with a promise of lifting her family from poverty she exclaims, “How dare you call me poor! I know how to live off the land.” Acuña may be illiterate but she’s also one smart cookie who knows how to work the system, too.)

And then there’s David France’s HBO doc Welcome to Chechnya, about the underground railroad run by LGBTQ activists in Moscow to ferry out their many queer brothers and sisters currently facing torture and certain death in Ramzan Kadyrov’s Chechnya. (You know things are bad when you’re looking to Putin’s Russia to provide for basic human rights.) Employing deep fake technology to mask the identities of those fleeing, the film most likely will also earn the director of How to Survive a Plague his second Oscar nom.

But the most unfortunately timely doc of all is Ursula Liang’s Down a Dark Stairwell, which explores the case of Akai Gurley, an innocent and unarmed black man shot to death in an unlit stairwell by a rookie cop on vertical patrol in a NYC housing project back in 2014. Though the inexperienced policeman ultimately became the first NYPD officer convicted of an on-duty shooting in over a decade, this form of racial “justice” came with a twist. The man found guilty of manslaughter and official misconduct was Hong Kong-born, Brooklyn-raised Peter Liang, whose arrest and trial sparked one of the largest Asian-American protests in US history — dividing not just the African-American community from its Chinese-American neighbors, but splitting the Chinese-American community within itself. It’s a tale of racial inequity that simply can’t be seen in black and white.