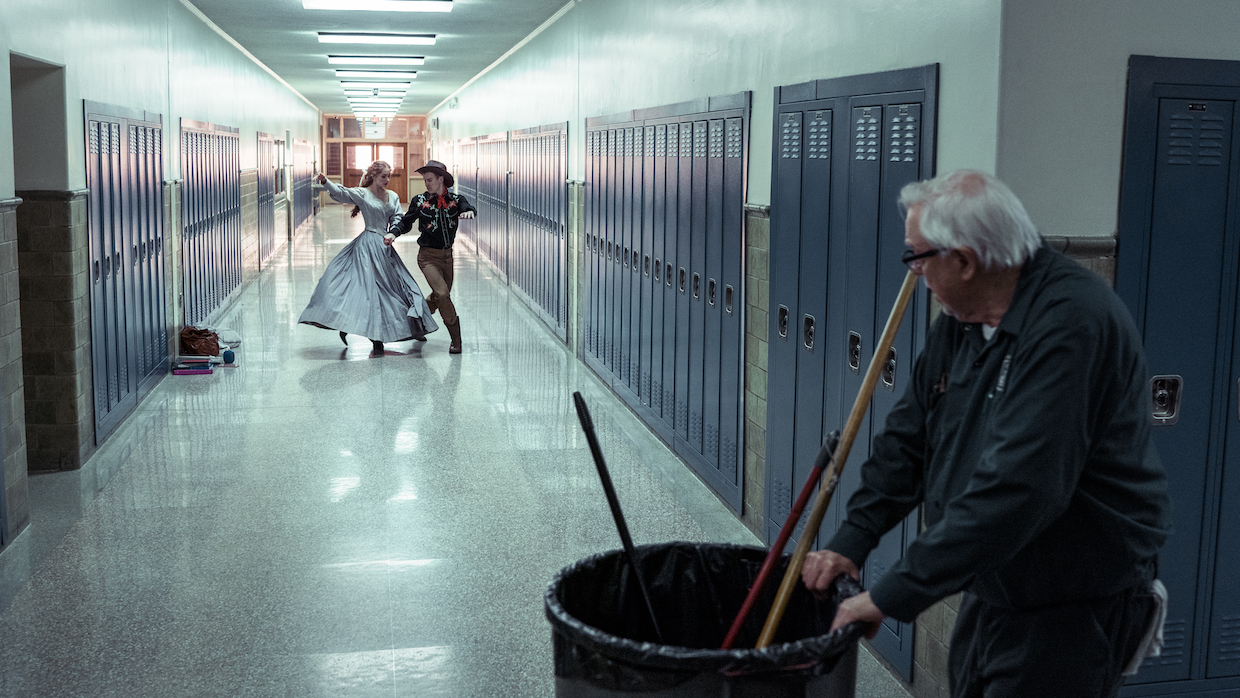 Adapted from Iain Reid’s 2016 novel, Charlie Kaufman’s I’m Thinking of Ending Things returns to familiar preoccupations—solipsistic men and idealized girlfriends, already subjective memory’s decay, aging and death, ambitious futility. From the book Kaufman retains the text of page one (an interior monologue from the unnamed female narrator), some dialogue from the subsequent first chapter and the course of events up to about page 150 (out of 210). Otherwise, the dialogue’s almost entirely been junked before a final act of Kaufman’s own conception, which are both excellent substitutions: the novel has a manifestly underwhelming twist ending and isn’t exactly packed with scintillating exchanges along the way. Both book and film begin with said narrator (Jessie Buckley, whose character is referred to by multiple names onscreen) and new-ish boyfriend Jake (Jesse Plemons) on a long drive to his parents’ place for the dinner from hell. On the page, the narrator’s flatly written interior reverie (a mixture of childhood memories, fears this relationship won’t last, etc.) is broken up by conversation like this, which Reid is pleased to call “essentially a philosophical dialogue”: “Maybe we’re not supposed to know all the answers. Questions are good. They’re better than answers. If you want to know more about life, how we work, how we progress, it’s questions that are important. That’s what pushes and stretches our intellect. I think questions make us feel less lonely and more connected. It’s not always about knowing. I appreciate not knowing. Not knowing is human.” This isn’t, by my estimation, philosophical dialogue; I’m not sure it’s even a TED Talk. (Spoilers follow)

In place of what’s been subtracted, Kaufman adds, for starters, an actual personality for his female lead. The novel’s rendition of her interior life is basically an extended AITA anecdote plus traumatic flashbacks, a series of fears and reminiscences never fully separate from Jake. There are arguable structural reasons to justify this POV: the woman and Jake are revealed by the end to be one and the same — a lonely janitor’s projections of the couple that could have been if he’d been bold enough to approach a girl at a bar decades ago — so the characters don’t have exterior, uncoupled lives. Even so, that doesn’t overcome the tedium of reading two none-too-interesting people trade stabs at freshman philosophy. If Kaufman’s leads aren’t real, that still doesn’t mean they have to be dullards; this incarnation of the duo have actual interests to talk about, and they’ve definitely done the reading — quite a bit of it. While the book keeps the two characters consistent until the finale, here the woman’s name, professional track and identity keep changing: it takes a while to catch on to Buckley’s many iterations, her hair/wardrobe/persona shifts literally obscured as the car drives into increasing darkness. Poetry, quantum physics, gerontology and film criticism are some of her specialties, the latter especially pertinent: with dialogue perfectly on schedule for COVID viewing, there’s a digression on how even (perhaps especially) bad movies serve as a “virus,” a “societal malady” infecting all of our brains.

Both characters’ speech alternates between Kaufman originals and wholesale appropriation of other texts — sometimes acknowledged as belonging to others, sometimes not, all articulated by the dyad with the same level of intensity as their “original thoughts,” collapsing the boundary between those and the ones that formed them. Early on, dialogue includes echoes of things we’ve just heard, or will hear later on in different contexts, from two characters from whose POV can’t rationally explain what they’re saying. Yet the exchanges don’t confuse either of them or get flagged as unnerving: it’s fairly clear early that we’re trapped in a univocal consciousness, the major question being whose and how many people are represented through it. In a thorough breakdown of the movie/novel differences, Matthew Dessem argues that “Some movies have mysteries that are better left unsolved, but I’m Thinking of Ending Things isn’t one of them: There’s a pretty straightforward narrative explanation for why things get so weird, and it’s spelled out more explicitly in the book than in the movie.” I agree with that, and disagree with Reid’s assessment of how it would be “impossible” to film his book as written: a little voiceover for the big reveal (a seemingly unrelated janitor is the couple), perhaps over some flashbacks previously seen from different angles, would get the job done.

Kaufman does basically provide all the information you need to unpack the ending, but very quickly, and I’m not great at untangling narrative puzzles. Would the movie work better for someone who’s never read the book (because it’d be an entirely unexpected experience to work through on your own), or is it easier to admire if you already know the ending? I have to go with the latter, for a few reasons. Once the book reveals its twist, there’s no place left to go except to wrap it all up, and the path to Reid’s choice of ending is padded out with a generic serial killer slasher climax, the protagonist hiding in a school terrified someone’s out to kill her. Kaufman’s whole-cloth finale treats the POV revelation as a starting point for re-processing everything we’ve seen on an emotional level, arriving at a new place of acceptance without changing the plot. In that sense, it helps to have read the book and so not wonder “what’s happening,” which is now fairly clear — a consciousness that’s projected itself into a hypothetical couple is retelling this narrative one more time, finally accepting that the relationship never happened while preparing for death — and simply marvel at its conceptual boldness.

The janitor’s dawning awareness is mediated by cultural texts (annotated in the end credits, which Kaufman would prefer viewers read) invoked with increasing frequency until original dialogue has been excised altogether in the closing scenes. In other words, we are what we watch, which is not a super-new thesis (and it’s not that surprising that High Fidelity and Charlie Kaufman might end up in such close thematic proximity to each other — I also thought of Vanilla Sky, another text about constructing personal identity wholecloth from personal favs). What’s fascinating, though, is how Kaufman goes about realizing it. His choices for attempted catharsis are much more interesting, cheerful and esoteric than Reid’s brown acid meltdown, presenting the same moment of acceptance through three different artistic formats that serve as stages of mourning and release: a dance from Oklahoma! in which the janitor symbolically kills off his dream-girl scenario; a recreation of Russell Crowe’s final monologue from A Beautiful Mind repurposed to give that unreal love a final goodbye; and a song from Oklahoma! bitterly accepting solitude. This is all very strange, a series of conceptual setpieces that persist at great length, but not unprecedented in Kaufman’s work: that this in many ways gravely serious march to mortality stops to travesty Ron Howard in detail is part-and-parcel with the extremely specific industry jokes in Adaptation. Sincerity sits cheek-by-jowl with petty industry spite, and it’s more than likely imminent death will not bring out our higher minds. Our extremely porous consciousnesses are constantly refracting experience through cultural objects whose unconscious ramifications level art both significant (A Woman Under the Influence) and laughable (A Beautiful Mind) to the same level — we don’t get to choose what sticks. As someone who’s often worried that the last words to pass through my brain will be “‘What do you want on your Tombstone?’ ‘Pepperoni…and cheese,’” it’s not hard to relate.

One seeming guiding spirit isn’t explicitly discussed or otherwise spelled-out onscreen (and for all I know I’m guessing wrong): the final moments of 2001, when Dave Bowman ages from one elaborately made-up elderly manifestation into another. That’s recalled in both dinner with the parents (Toni Collette and David Thewlis age into senility and dementia, then back into youth, in a house that looms over low-angle shot perspectives) and that Beautiful Mind finale, both dominated by the performers’ conspicuously artificial aging makeup and the equally stylized body language of decay. In that light, the extremely long driving/talking scenes (three in total), the couple driving into increasing darkness as the night wears on, scan as a much dimmer and extended journey though a different Star Gate: not towards enlightenment, but the inevitable, which may not end up being the same thing.

I’m Thinking of Ending Things is currently streaming on Netflix.