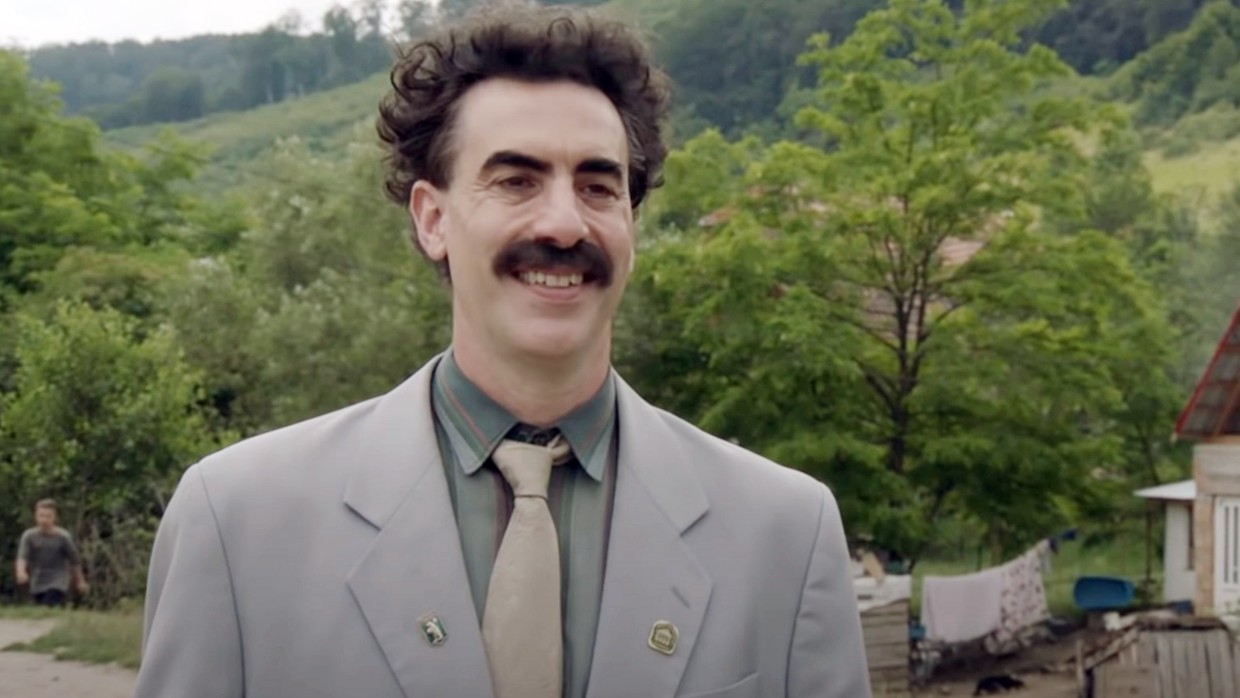 The original Borat wasn’t really a movie so much as a cultural flashpoint, with Sacha Baron Cohen trolling average Americans into casually revealing their racisms (it doesn’t take much!) in between public provocations, many of which invited the possibility of an ass-beating. Fourteen years later, it’s hard to recapture the charge of that very particular cultural moment and nobody really wants to hear “My wife” ever again, so what are we doing here? Borat Subsequent Moviefilm (full subtitle: Delivery of Prodigious Bribe to American Regime for Make Benefit Once Glorious Nation of Kazakhstan) is mostly tedious or borderline unwatchable for much of its running time in ways that are eminently predictable—but when, 70 minutes in, Baron Cohen finally gets around to making some news, he does not miss. One particular Trumpworld figure is about to have a very spicy week.

That 70 minutes is a long time coming: by my count, nothing truly notable happens until about 38 minutes in, when Baron Cohen crashes CPAC 2020 in full Trump costume. Much of this Borat is predicated on the presumed inherent comic value of e.g. hearing people say “titties” a lot and a surplus of both torturous accent-related punning and anti-Semitism (best line in that vein: “Nice weather we’ve been controlling”). There is way too much story (and definitely too many Kazakhstan jokes) surrounding what’s essentially 10 minutes of money viral footage. Borat is assisted this time by a new sidekick, his 15-year-old daughter Tuta, played by first-timer Maria Bakalova; her anonymity allows her access into spaces the now-too-recognizable Borat couldn’t penetrate, though he still does a good deal of in-person work with the help of a lot of new prosthetics.

Baron Cohen’s method sometimes involves going into people’s spaces, but he’s also prone to constructing situations and seeing if people manifest their worst selves accordingly (or if he can at least freak them out). In one, Borat and his daughter attend a debutante cotillion, thereby inevitably catching middle-aged men saying creepy things—a small “gotcha” before an extended gross-out gag that didn’t land for me. One of the fathers at this event, Will Davis, describes how he got into this situation in an essay: “Our friends had been contacted by a movie company that wanted to film a fictional scene of Southern belles making their debut. The company would pay fathers and daughters $100 apiece, and all we had to do was dress up, dance a little and enjoy free cuisine and drinks at the beautiful antebellum Hay House in downtown Macon.” Davis is, notably, the publisher of the Monroe County Reporter and able to write whatever he wants in his own newspaper, whose values presumably reflect community standards. He concludes: “I have no real problem with Borat getting a laugh at our expense. I find some of his stuff pretty funny. I will laugh a lot harder if we get the last laugh on Nov. 3.” This makes me almost wonder if I’m underestimating Baron Cohen’s guile in getting people to keep digging long after he’s done with production—but, still, five minutes for a gross-out gag and a months-later local op-ed is a lot of low-return effort.

While Baron Cohen is certainly leaning into current news items (getting a baker to write “Jews will never replace us” on a cake etc.), this mostly feels like a rehash of his greatest hits until the pandemic hits: the crowds of people in the opening scenes, notably at a state fair, which demonstrate that this started shooting before the lockdown, disappear entirely. (This is the first full-fledged feature film of the pandemic era*, complete with COVID compliance supervisors in the end credits.) Two notable things immediately happen after the lockdown takes effect, all within 15 minutes in this heavily backloaded film (skip from CPAC at 38 minutes to the 70 minute-mark), and it’s hard not to conclude that the pandemic upped everyone’s game. First, Baron Cohen successfully attends an anti-lockdown rally—again, in a trap the filmmakers constructed. “I mean, it was a miss,” admits Matt Marshall, an aspirant politician who was hoping his “constitutionalist” political views would finally find sympathetic, non-racist support. Once again, the filmmakers set up a situation by paying for an entire rally, this time to far greater effect than the debutante ball: Baron Cohen performs another gleefully racist tune in the “Throw the Jew Down the Well” vein, then immediately peaces out. The gotcha is that some of the crowd sings along, a fact that Marshall professes to NPR, in all seeming sincerity, to be both surprised and upset by: these are his people? Baron Cohen then follows that with a very high-level entrapment in which a certain public figure commits one of the biggest unforced errors Borat’s ever provoked; in a normal administration, they’d be announcing their resignation about an hour after the first reviews hit, and I hope they have a miserable time with the news cycle. The embargo asks that names of public officials be held in initial reviews; stay tuned. [Edit: and there it is.]

*No disrespect is intended to DTV workhorse Charles Band, who’s already put out two features this year (Corona Zombies, Barbie & Kendra Save the Tiger King), but they’re by all accounts basically just versions of What’s Up Tiger Lily? plus some Zoom-shot footage. It’s not quite the same.↩