Ballard in the Rear View 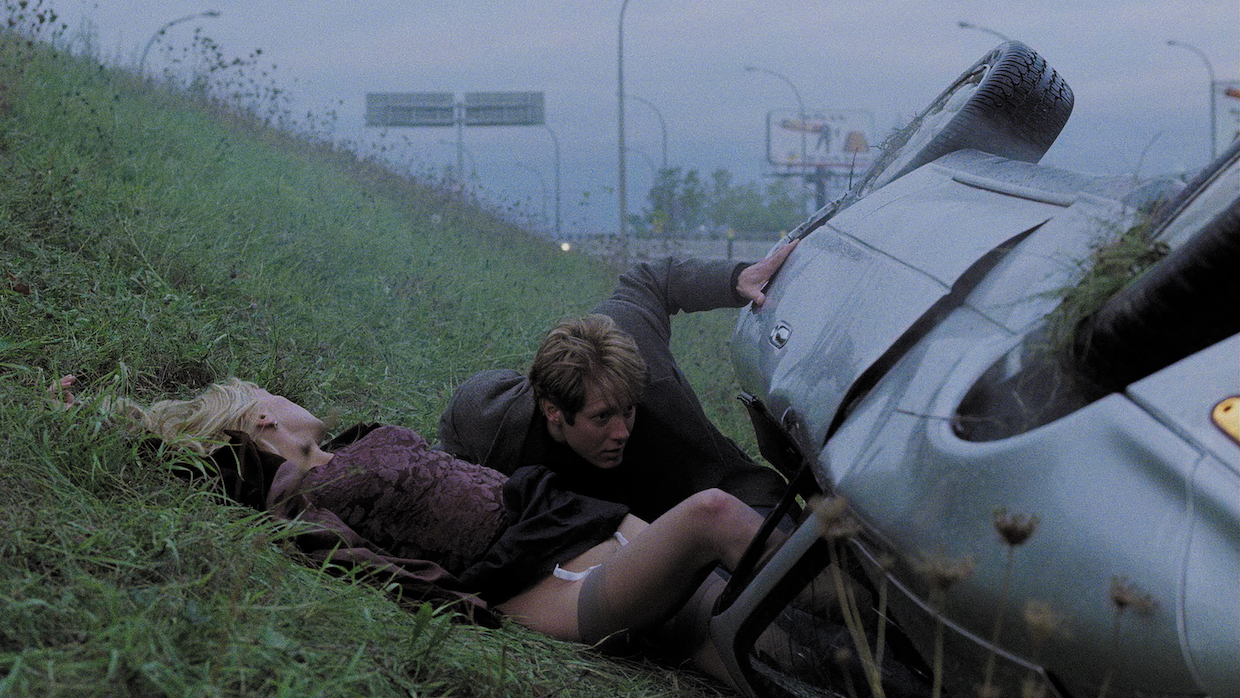 Deborah Kara Unger and James Spader in Crash, courtesy of the Criterion Collection

In his autobiography, Miracles of Life, J. G. Ballard reminisces about a derelict casino he came across in his youth. The abandoned building gave him the sense that “reality itself was a stage set that could be dismantled at any moment, and that no matter how magnificent anything appeared, it could be swept aside into the debris of the past.” It is a canny summation of the familiar visuals in his fiction. Ballard was obsessed with facilities like hospitals and airports, places with sterile obstructive architectures and machine-like routines for individuals to perform, and theaters of reality that break down in the absence of social control. His world was one with a doomed future and no nostalgia, either. Characters often sequester themselves in their modern homes or withdraw from society in built spaces intended for passage rather than habitation. A common theme—ever relevant—is that technology cannot repress human nature and might instead contribute to the derangement of individuals and societies.

Ballard’s voice is distinctive—like he’s writing in the cool and lucid moments of shock after a disaster, before the anger, despair or resignation has set in. This emotional detachment might be why his fiction travels so well—through decades and across cultures—and has influenced many, including countless filmmakers. Ben Wheatley’s 2015 adaptation of High-Rise, while faithful to the story, filled in the emotional blanks with cheekiness and antic spirit. This High-Rise, campy and acidic, nearly annihilates the presence of the author, whose own dry humor is as much a signature as the aesthetics now synonymous with his name. Empire of the Sun, Ballard’s fictionalized account of his wartime childhood at a Japanese internment camp in Shanghai, was adapted into a 1987 Steven Spielberg film. The quiet vulnerability in the book was transformed into Hollywood sentimentality—an approach that actually delighted the author. By coincidence, the stage set of his life was reassembled in a film studio in Shepperton, the London suburb where the author lived. His neighbors worked as extras.

The idea for Crash, the author’s 1973 novel about car accident fetishists—his most infamous—began as a chapter in his earlier novel, The Atrocity Exhibition, and later, a show of crashed cars the author exhibited in a London gallery. This early material inspired Crash! Harley Cokeliss’s short film starring the author, who comments on the “speed, drama, aggression” and other elements of the driving experience from his seat behind the wheel, later visiting an automobile showroom, a junkyard and a car park. Mute Records founder Daniel Miller abandoned his film script adaptation of Crash and instead condensed the ideas into a three-minutes-and-20-seconds song, “Warm Leatherette,” with his band The Normal; later, Grace Jones covered the song with her own distinctive snarl. Crash also inspired Zoe Beloff and Susan Emerling’s Nightmare Angel in 1986. A decade later, David Cronenberg’s adaptation premiered, a new digital restoration of which the Criterion Collection has scheduled for release in December.

Cronenberg, with his “body horror” and shared fascination with technology, seemed an obvious kindred spirit. It is interesting to see where his and Ballard’s imaginations overlap and collide. This polarizing film lands right at the critical knife’s edge—Francis Ford Coppola allegedly found it reprehensible, while Martin Scorsese named it one of the decade’s best. Those with mixed feelings about it might file Crash away with other 1990s—decidedly pre-9/11—takes on white ennui like Fight Club and The Matrix. It might look like another movie about a character with a secure job and health care who is sleepwalking through a dull and purposeless life before a jump start on reality, but its scope is much wider.

The maniacs in Ballard’s fiction are always calm and in control; they are the sociopaths who run for office, not the sputtering red-faced Howard Beales who wig out with abandon. That’s why Elias Koteas, complete with motor oil–encrusted fingernails as the nihilistic charmer Vaughan, stands out among a cast of remote and enigmatic performers that includes James Spader, Deborah Kara Unger and Holly Hunter. Koteas is full of the confidence and determination of a genuine madman—the sort you might have a conversation with before realizing he’s out of his mind.

There’s more ironic showmanship in the movie. A stock car–racing event with stunt drivers becomes a rally of freaks with Vaughan emceeing. In a famous accident restaged for the crowd, he performs as Rolf Wütherich, James Dean’s mechanic, who sat next to the actor in the passenger seat of his Porsche (“Little Bastard”). He’s done his research and keeps notes on the bodily injuries and types of collisions of all famous crashes, even deep cuts like Nathanael West’s station wagon—this is the work of an obsessive, after all. In the novel, Vaughan works toward his goal of crashing into Elizabeth Taylor. Cronenberg was wise to cut this—a plot point that would be just too real on celluloid, not to mention mean-spirited toward an actress, who at that point was a senior in ailing health. No younger actress had quite the same legend status, nor would a replacement have been wise given the direction of the film. While Ballard levels the automobile technology and sexual acts in his book, Cronenberg elevates one over the other. Simon Sellars explains the difference in his feverish memoir in fandom, Applied Ballardianism. In the book, the characters are “more interested in technology than sex,” Sellars writes. “In the film, the reverse is true: It’s not technology that Cronenberg is interested in but sex.”

Rereading the novel with my right leg propped up and a bag of ice at my hip—a cycling injury, much lower stakes than these characters would enjoy—I noticed that no one in Crash ever reaches for a bottle of ibuprofen. Their pain is only briefly alluded to—even psychic wounds are blunted by the sheer force of the absurdity of modern life. The characters are never depressed, anxious, spiteful or grieving; alienation is the dominant mode. This isn’t a case of neglectful characterization, as Ballard has instead fully developed their single-minded obsessions. Ballard never needed to write about androids or extraterrestrials to get his message across; human beings are alien enough on this planet.

I’ve read most of Ballard’s work, and Crash has been among the novels I returned to the least frequently. I’m a fan, for sure, but it always struck me as Ballard at his most condensed and obvious—transgressive and unsubtle in a way that appeals to teenagers. Now, I’ve developed an appreciation for it. As the writer of quarantines, abandoned shopping centers and climate catastrophe, Ballard has seen his name invoked quite often this year. But Crash resists lazy positioning. Ballard’s particular style of deadpan is the glue that holds this work together; it is impossible to work around, as Wheatley or Spielberg did in their different adaptations. People sexually excited by car crashes? Of course, that’s bonkers! The premise can’t be distilled to an artfully drained swimming pool; the humans are right there, embedded and in bed with the machines. The lack of subtlety in Crash animates its many adaptations, and each articulates the central bleak vision: Eventually, the new will be old, all systems can and will break down, civilization has a limited moment of survival and isn’t infinite, that which we build for security or convenience might be the death of us.

“Always he deliberately side-stepped into self-parody,” Ballard writes of Vaughan in the novel. He could have said the same for himself or Cronenberg, just as keenly aware that viewers who weren’t scandalized by the film could still roll their eyes. It is a concern that shapes Koteas’s performance. In a rare moment of self-doubt, Vaughan wonders whether a line from his speech—“James Dean died of a broken neck and became immortal”—landed as he hoped. He turns to the fellow travelers in his car and asks, “Was that glib?… I couldn’t resist.”