Get Ready to Stream: Delivering a Film in 2020 to a Virtual Festival 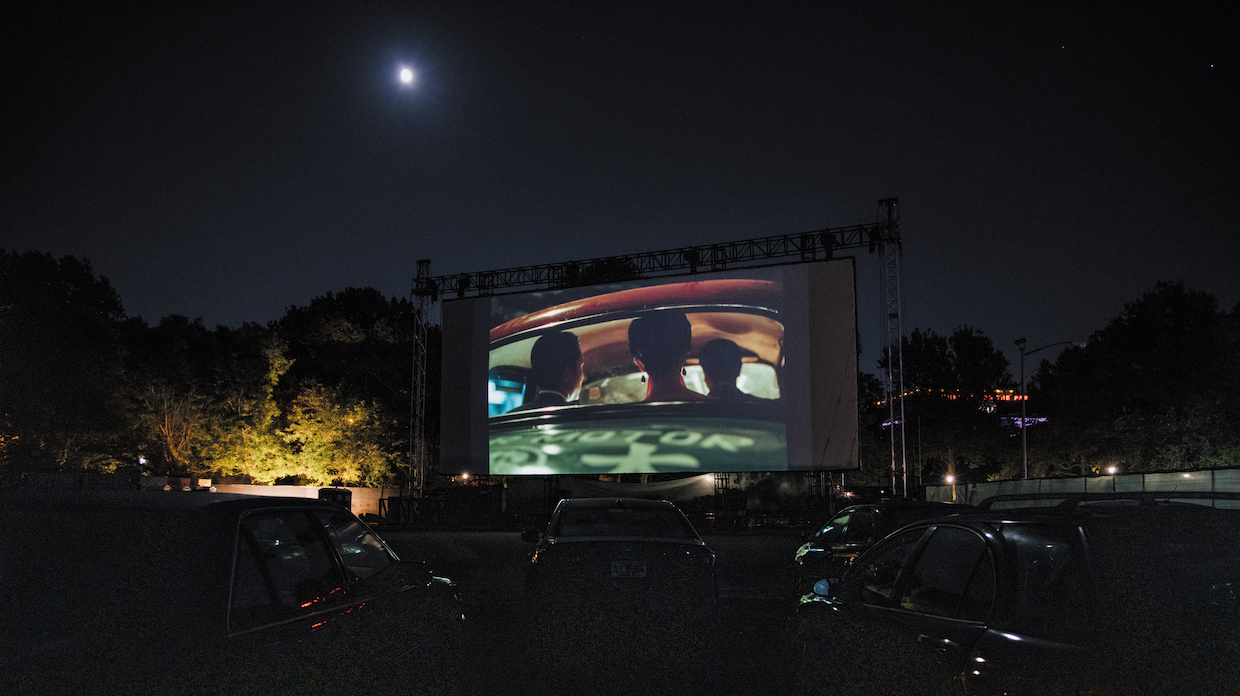 An In the Mood for Love screening at NYFF, photo by Sean DiSeio

by Sergio Andrés Lobo-Navia
in Filmmaking
on Oct 28, 2020

Six months ago, I was considering an update to my now biennial guide on how to prepare your film for festival exhibition. The 2018 version of that guide is available on the Filmmaker website and is a good reference if you are showing your film at a drive-in or outdoor screening that has a DCP server or some other file-based playback system. However, the majority of festival screenings happening this fall and into next year will be on virtual festival platforms. Pre-pandemic, I would’ve told you that the widespread adoption of a streaming component to festivals was as likely as theatrical exhibitors dramatically shortening exclusivity windows for new releases. But circumstances have clearly changed. Many smaller festivals are struggling to survive, and virtual screenings will be the primary methods that nonprofits seek to rebuild sponsorship and patron dollars lost to the canceled in-theater events.

Your decision to exhibit your content virtually is an important one. I will argue that it is morally indefensible to put people’s health at risk to show your work. There have been festivals since March that have done in-person screenings in pandemic hot zones. This decision puts staff members who work at festivals and patrons at undue risk. Until there is an adequate vaccine and the universal adoption of mask wearing, you should decline any invitations to show your work indoors. Drive-in venues and socially distant outdoor screenings are the only safe way to do in-person events.

The backbone of streaming platforms are H.264 files. H.264 was developed to provide superior image quality at a smaller bit-rate, which would require less bandwidth on the end user. The better streaming platforms will take your master file and create several different versions of differing qualities. If a user has more bandwidth, generally between 10 to 20 Mbps (megabits per second), they will be able to play the 1080P version. Users with slower connections will be able to stream versions at lower resolution to avoid buffering.

Make sure to review your H.264 file before you upload it and confirm that it meets your expectations. In brief, you should be delivering a .MP4 file encoded as an H.264 file with

If you are on a Mac, please deliver a .MP4 file and not a .MOV file. A great container format, .MOV is a proprietary Apple container and isn’t supported by all platforms. You should be delivering .MP4, an international standard, as a best practice.

Most platforms do not support 4K files. Treat the 1920 x 1080 container resolution as your canvas, and format your work within that canvas. If the aspect ratio of your film isn’t 1.78, then your final file is going to have black masking, usually at the top. A film in 1.85 aspect ratio will have a thin black masking bar at the top and bottom, while a 2.39 film will have a more pronounced mask. A project that is in 1.66 or 1.39 aspect ratio will be pillar boxed, with masking on the left and right of the image. Your image should touch the top and bottom of the frame. If your file is both pillar- and letter-boxed and is floating in the middle of the screen, you probably have done something wrong and should check your export settings. A general rule of thumb is that if the image can’t fill the screen, it should be either touching either the horizontal or vertical sides of the frame.

For an exhibition copy, 10Mbps bit rate seems like it is a low bit rate. A DCP from a studio will usually be somewhere near 250 Mbps. A Blu-ray disc will usually be somewhere between 30 and 40 Mbps. Because you’re streaming to, at most, a large 50- to 60-inch television screen, you don’t need a large bit rate file. In theory, you can upload a large bit rate file, but the platform is either going to reject your file or create its own 10 to 20 Mbps version when it creates the different versions for different bandwidth needs.

Most festivalgoers will be watching your film in a stereo sound environment. If you’re lucky, they’ll have a sound bar or use a decent pair of headphones. You should submit a high quality two-channel sound mix that’s designed to be watched on a computer. Some streaming platforms, such as CineSend and Eventive, do support multichannel surround sound via Dolby Pro Logic II. Pro Logic II uses a two-channel LtRt stereo audio file but can be decoded into four discrete surround audio channels. The problem is that most editing software doesn’t encode Pro Logic II files into H.264 files natively. There are solutions that use open source software, such as HandBrake, to encode these files properly. You’re jumping through a lot of hoops for an experience very few patrons are going to be able to enjoy. No matter whether you upload a stereo mix or a Pro Logic II mix, you should make sure that your audio file has two channels. Many platforms will reject a file that has more than two audio channels.

Last, you need to have captions. Not for the audience who has gotten used to having captions on while watching Netflix because their HDTV speakers are reflecting audio onto the wall behind the TV before it reaches them, and they can’t understand what anyone is saying and, honestly? They should get headphones or buy a soundbar. It is disgraceful how many
independent, low-budget productions in the past completely disregarded making their films accessible with either captions or alternative audio descriptions. If we are going to use the pandemic to try and make the world a better place, captioning is literally the least that you, as a filmmaker, can do. The assumption is often that if the film gets picked up by a distributor, those costs will be absorbed as a distribution cost. Don’t do this. Provide a caption file: .SRT or .VTT. You can pay a post house to do it or just make it a part of your transcription process. Make sure not to put any HTML markups in your file, such as <i> for italics. Many platforms have trouble with these markups, and they will appear in your captions, making them hard to read.

A caveat about DRM (digital rights management) and protecting your intellectual property: All of the major streaming platforms have DRM operating on users’ web browsers. DRM is designed to prevent users from downloading copies of the film they’re watching, and it mostly works as intended. But while native browsers such as Safari for OSX or Edge for Microsoft Windows have a hardware connection that blocks screen recorders, nonnative browsers, like Google Chrome or Mozilla Firefox, do not have the same hardware level access, so a user could use a screen recorder. It’s fully possible to request that a platform block users from accessing your film using Firefox or Google Chrome. I’ve heard arguments against doing it because it is an inconvenience for users. Most festivals, and even big streaming platforms like Netflix and Amazon, have decided that access is more important than security. If someone really wanted to pirate your film, they could just shoot a recording off the screen using their phone. Platforms also offer both visible watermarking (usually at no extra charge) and forensic watermarking (for a price). If someone makes an unauthorized copy of your film, these watermarks can track down the user.

After submitting your file, you should prepare for both prerecorded and live virtual events. You should first check the upload speed of your internet connection. To have a decent Zoom call, your upload speed should be at least 5 Mbps. The easiest and best way to figure out your connection speed is speedtest.net. Next, you should find a good area to conduct your call. A quiet space, with no discernible echo and where a lot of natural light falls evenly on your face, is best. Don’t think too much about your background—lighting is far more important. Production and other conventional lights can help remove shadows from your face, and backlighting yourself can create the illusion of depth that is as helpful on Zoom as it is on set. Additional lights are also important if you’re in a space that only has harsh overhead lights that cannot be easily controlled.

Your laptop should be placed on a stack of books or another solid object so the camera is slightly above your head. Tilt your laptop screen/camera forward so it’s pointing down toward your eyes. Place a white tablecloth, large piece of paper or some sort of white poster board beneath your laptop and in front of you and make sure it’s out of the camera frame to create a makeshift fill. Unless the room you’re in is completely silent, it’s a good idea to use a pair of headphones. If you have access to a directional USB mic, that’s even better. I have also been pleasantly surprised by the quality of Apple AirPods as an all-in-one headphone/speaker solution.

As for etiquette, you should always try to arrive early to recording/live sessions. Plan ahead to make sure that no one else will be using your internet connection for other video calls, streaming, gaming—anything other than light web browsing and email. If you’re in conversation with more than one person, keep yourself on mute and hold the spacebar to unmute yourself while speaking. Last, keep a phone or tablet with Zoom installed charged and ready to go. If anything happens to your computer or internet connection, you can jump right back into the conversation.

The people and organizations putting on these festivals are fighting for their jobs and existence. The pandemic has put stresses on many nonprofits, and the festival landscape is going to be decimated in the next couple of years (or swallowed up by larger national festivals that are planning events outside their usual locations). Be friendly and kind to everyone who wants to promote and show your work. Direct your networks, friends and families to your events, and encourage them to buy tickets and passes. Don’t ask for an excessive number of free passes for everyone on your crew because festivals pay a DRM fee every time someone watches something. Staff will remember your kindness in their time of need, and it will pay dividends when you’re back with your next project.