“I Work in the Streets — That’s My Studio”: Ernie Gehr on His Lower East Side Trilogy 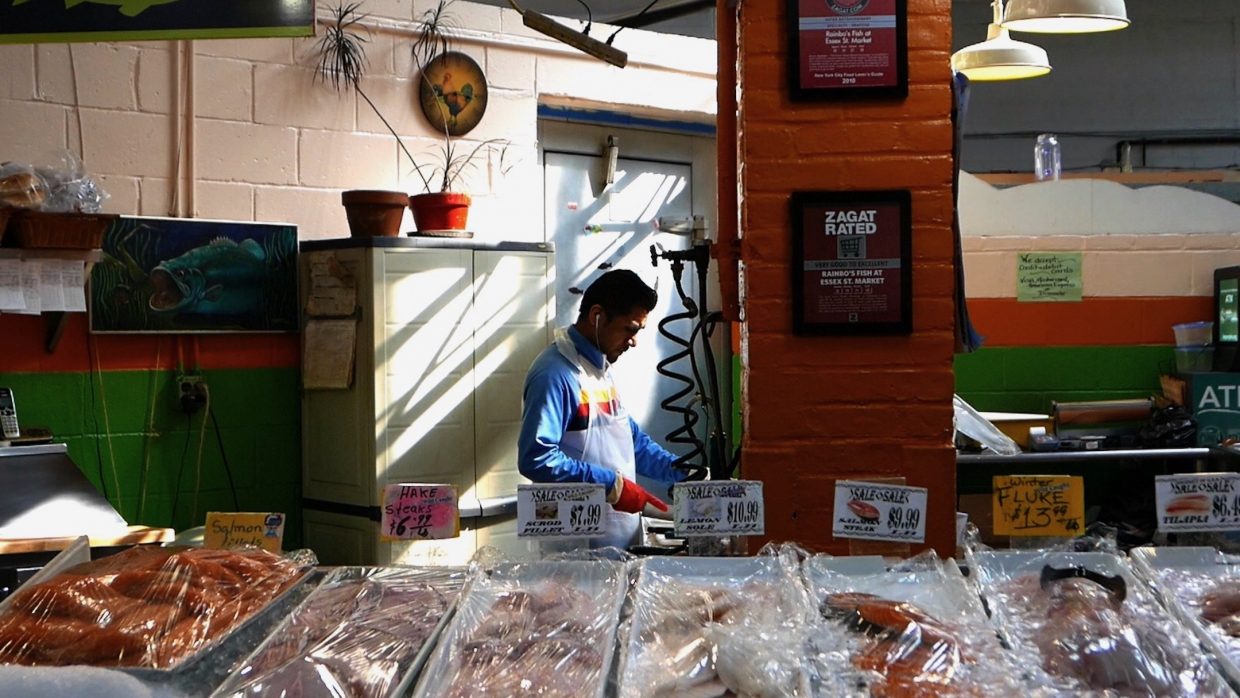 Screening on The Museum of Modern Art’s Virtual Cinema through January 21, Ernie Gehr’s Lower East Side Trilogy combines three of his recent pieces: Autumn (completed 2017), Aproposessexstreetmarket (2018), and Circling Essex Crossing (2018). MoMA describes the trilogy as a sequel to Gehr’s Essex Street Quartet, currently screening in an installation on the Museum’s fourth floor.

For Essex Street Quartet, Gehr reshaped footage he had taken some 45 years earlier. The Trilogy comprises new material that documents a rapidly changing Lower East Side.

Gehr spoke with Filmmaker by phone from his home in Brooklyn.

Filmmaker: How have you weathered the Covid-19 pandemic?

Ernie Gehr: I have been very fortunate. It hasn’t affected my work. Last year, 2020, was actually one of the most productive years that I’ve had in a while. I can’t even remember how many pieces I completed. Instead of running around town, I ended up focusing on my neighborhood and on the back yard where I live.

I do miss being able to just travel freely, interact with people. And I don’t mean going from one place on the globe to another, but just moving around. I haven’t been on the subway since March.

Filmmaker: Do you see the Trilogy as a sequel to the Quartet?

Gehr: No. The Essex Street Quartet was recorded in the early 1970s and then sat on a shelf for 25 years. I had decided to throw it out because I needed shelf space. But I looked at it, and found out that I actually liked the footage. Without my previous ideas about what I wanted to do with the material, I was able to recompose that footage.

Let me give you some background. When I came to New York in the 1960s, I lived on the Lower East Side. I was attracted to its diversity, and its cultural and economic opportunities. In 1988 I took a teaching position in San Francisco. My wife and I moved there for 18 years. When I stopped teaching and came back to New York, I began to explore the city again. I was struck by the changes taking place on the Lower East Side. Developers were buying up places and the neighborhood was rapidly changing. There wasn’t a block without construction.

Filmmaker: What led you to start making Autumn?

Gehr: I work in the streets — that’s my studio. New York City is a huge studio with all its actors, the leads and bit players, in costume makeup all the time, day and night.

But I refrained from filming the Lower East Side. I felt, leave it alone, do something else. My friend Peter Catapano kept encouraging me to film there. He said he loved the Essex Street Market piece from the 1970s, why didn’t I go back and do something about what was happening there now. Through his prodding I began to approach the possibility of working on the Lower East Side again.

Before I began these three pieces, I was focusing on one square block where Essex Crossing was going to be built. It was just an empty space, bushes, grass, a lot of debris. I did a small piece, maybe five minutes long. I felt, “This is too artificial, you don’t know what you’re doing.” And I gave up on it. That was 2014.

In 2015 I was busy with other work. After the summer of 2016 I began to film on the Lower East Side again. I avoided the market at first, I was just recording glimpses of spaces, areas that I was interested in or that I remembered in a different form or shape in one way or another.

Overlapping that period, I began to go into the market. I wanted to record some sense of the character that the market still had for me.

Filmmaker: What camera were you using?

Gehr: A Panasonic Lumix. It’s a small, pocket camera that came out in late 2014. It doesn’t have gadgets to manipulate when recording moving images. But it’s light and I could put it in my pocket.

Filmmaker: Can you explain your approach to shooting?

Gehr:  How do I work? First of all, I’m always conscious of the device I am using, its characteristics and limitations.  I try to respond to my environment, to the things that are in front of me at the time I am recording images. Ignore everything else, anything conceptual, any ideas about what it is I want to do, and just respond. Have an immediate gut response to what’s happening in front of me, or what I feel might be happening.

In none of the three pieces did I know what was going to happen. I never directed anyone to do anything.

Filmmaker: How do people respond to you when you’re filming?

Gehr: I don’t know. Most of the time I guess they’re aware I’m recording, especially since everybody has a smart phone. People are used to it now, much more than before. If somebody says, “No pictures,” I don’t take their image, and if I have recorded it I erase it. If I feel later on that individuals might be uncomfortable, I do not use that material.

The camera was never hidden. It’s either in my hand, or on some flat surface. I’m holding it, sometimes high, or by my waist more or less in front of me. Or I would place it on a surface, when the image swishes left to right, for example.

Filmmaker: For Autumn, did you scout out locations beforehand?

I would just walk around, and what would catch my eye was what I ended up recording. What I was moved by, intrigued by, or felt was worth recording. I left out a lot of images that I would have loved to have included in Autumn, but it was getting to be too long.

Filmmaker: But there must be a certain amount of planning involved, especially to capture the reflections you included.

Gehr: Steel and glass structures are very much part of contemporary urban spaces. They are ubiquitous on the Lower East Side, they’re as much part of the environment as three-dimensional forms. So I work with them as I do with other visual phenomena.

Gehr: At the heart of that is play, pleasure, amusement.  At the same time it informs.  For example, in Autumn there is an image within which there’s a painted head that looks like a skull across the street.  In the foreground there is a silhouette of a man examining a pair of shoes. The image echoes the practice of “collage,” not only in film, but also in photography and graphic works.

Filmmaker: As viewers we often try to make sense of images by constructing a narrative around them.

Gehr: That is part of how we look at and appreciate images. If one is open to it, however, images can also offer additional multiple levels of information and pleasures.

Filmmaker: Viewers also form images into a chronology, as if they’re unfolding in a straight timeline. Is that true here?

Filmmaker: What editing equipment do you use?

Gehr: I have a MacPro from 2006, a monitor and a keyboard. It’s outdated and I have to buy another one. Plus Final Cut Pro 6. I didn’t upgrade to 7, and when 10 came out editors were really furious with Apple because it’s incompatible with 7.

Filmmaker: I watched the Lower East Side Trilogy on my computer, not the ideal way to see it. Do you plan to show it as an installation?

Gehr: I’d love to. I’m waiting for someone to ask.

Filmmaker: What about screening it in a theater?

Gehr: That’s the way I would like to see the work. On a big screen, at a reasonable distance from it, so I can see the full screen, and at the same time easily pick up small details, gestures, textures, etc.  To my surprise, I also miss seeing cinematic works in a theater with other people.

Not having seen a painting, a physical painting, since March or maybe earlier, I went to MoMA after it opened in early December, and the paintings were coming alive for me. Seeing actual physical paintings was an incredible, beautiful, aesthetic experience I very much appreciated. And I assume that’s what it will be like for many people when they have a chance to look at cinematic works on a large screen again.