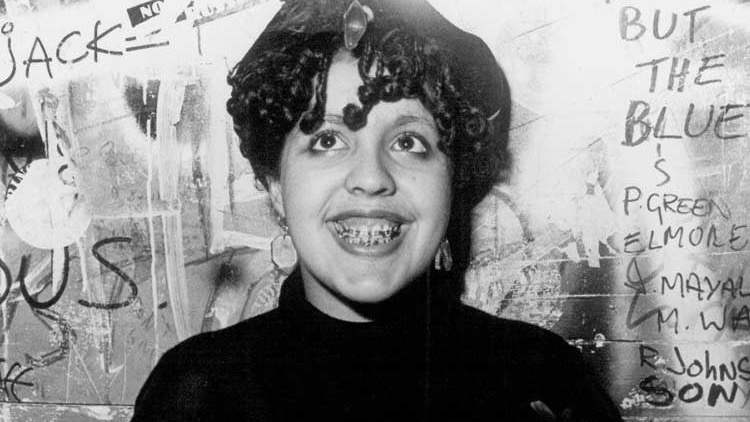 Poly Styrene: I am a Cliche

I’ll never forget the first time I heard Poly Styrene. I was in college, hanging out at a buddy’s one evening. We were drinking beer, smoking pot and playing records. One of them was something new, a document of the current London punk-rock scene: Live at the Roxy London WC2, featuring now-legendary acts like Wire and the Buzzcocks. The songs were by turns arty or aggro, surging out of a mix that felt submerged in an ambient murk. And then this teenager’s voice cut through. Over the curdled notes of Lora Logic’s saxophone, drums clamor and the song explodes. “Bind me, tie me, chain me to the wall/I wanna be a slave to you all … OH BONDAGE, UP YOURS!”

Most of those lyrics are hard to discern, although later given some studio polish in the official version of the song, but what comes through is this wailing intensity, a voice unlike any other that would anticipate so many more to come, from post-punk to Sleater-Kinney. I couldn’t stop laughing. In sheer glee. In shock and awe. In recognition of something that completely bypassed any analytical process of listening and jolted straight to the synapses in one of those classic frozen moments of WTF-is-this epiphany that songs exist to create, a reordering of the known universe after which nothing else would ever sound the same. Punk abounded with those songs, those moments, but it took only a few seconds of Poly’s voice to do the job. Previous generations had Le Rite du Printemps, Un Chien Andalou, Ad Reinhart’s “Abstract Painting,” or Ornette Coleman’s debut at the Five Spot Cafe. We had, at considerable geographical and socio-economic distance from the London punk scene, “Oh Bondage, Up Yours!”

By 1979, Poly – born Marianne Elliott-Said, to Scottish-Irish and Somalian parents – had left her band, X-Ray Spex, and only one album, the 1978 debut Germ-Free Adolescents. After releasing a solo effort, Translucence, in 1980, she dropped off the radar entirely, and joined the Hare Krishnas, a retreat hastened by bouts of hallucinations and treatments for misdiagnosed schizophrenia.  She circled back to music a few times, most poignantly with Generation Indigo, a 2011 solo album released a month before her death, at age 53, of cancer.

Poly Styrene: I am a Cliché,which takes its name from one of X-Ray Spex’s hits, explores the public and private sides of Poly’s life, through a much more personal prism: The reflections of her daughter Celeste Bell, who narrates and co-directs the film with Paul Sng, in a companion to her book Dayglo: The Poly Styrene Story. The framework lends an intimate vibe to a story whose details will be new to most viewers. The word is overused but it’s safe to say the performer was an icon, whose focus on themes of identity (the title of one of her best-known songs) and consumerism was forged as she pushed back against limitations that a biracial working-class woman would face in mid-1970s London. To paraphrase the film, if punks were the outcasts, a born outcast like Poly was already punk.  She also was a mother, an artist, a writer, a mystic and a fashion innovator, whose difficult yet trailblazing life makes for a far richer than usual rock-bio-doc. Not a cliché at all.

South by Southwest’s online 2021 edition was particularly robust for music-themed documentaries, the festival’s 24 Beats Per Second section a longtime calling card. I watched a handful, skipping the high-profile projects on Demi Lovato, George Martin and Charlie XCX in favor of items of more acute personal interest. One of those involved another pioneering British woman, pushing back to create the future: electronic composer Delia Derbyshire. Suitably playful, given its subject, Delia Derbyshire: The Myths and the Legendary Tapes, doesn’t bother to emulate the recent Sisters with Transistors survey of important women in electronic music, which also features Derbyshire (1937-2001), still best-known for the theme music to the British sci-fi show Doctor Who. Instead, it tries to be at least three films at once: a routine “talking heads and archival clip” biography; a document of experimental sound art (featuring Cosey Fanni Tutti, of Throbbing Gristle and Chris & Cosey); and a chamber drama, starring the film’s writer-director Catherine Catz as Derbyshire, upsetting the male-dominated protocol of the BBC Radiophonic Workshop in the 1960s and carrying on what seems to be a pretty wild personal life (although one thoroughly in step with the era). The bedrock of the production is the goldmine of 267 tapes discovered in her Northampton attic after her death.

It takes a bit to get the hang of what Catz is up to, and would probably help to have read some articles about Derbyshire before watching – the project almost begs to be staged as a one-woman show or something like one of Sam Green’s live-action events – but her performance as a prickly, adventurous, witty and obsessive woman ardently serving her genius (and enjoying her indulgences) is pure charm and grit. Bonus points for set design that turns the Radiophonic Workshop offices into something akin to Pee-Wee’s Playhouse.

Derbyshire’s tape experiments are part of a 1960s avant-garde that certainly helped establish the aesthetic backdrop for New York composer William Basinski’s work, most notably the piece known as The Disintegration Loops, recorded in 2001 and released in 2002. The 44-minute doc of the same name gives us the backstory and surveys the lasting significance of the piece, and how it came to be forever tied to the September 11, 2001 attacks on the World Trade Center, for which it has become an elegy. Filmmaker David Wexler conducts most of his business over Zoom, in multiple conversations with the impish Basinski, who talks about his long, long years spent in obscurity in the New York music underground, composing, recording and running a fanciful Williamsburg loft/performance space. All that began to change one day when he threaded up a piece of tape.

“In the process of archiving and digitizing analog tape loops from work I had done in 1982, I discovered some wonderful, sweeping pastoral pieces I had forgotten about,” he told newsounds.org. in 2011. “Beautiful, lush, cinematic, truly American pastoral landscapes swept before my ears and eyes. During the transfer process, as each of the loops played round and round on the tape deck, I soon realized the tape loops were disintegrating — the iron oxide particles were gradually turning to dust and dropping into the tape machine, leaving bare plastic spots on the tape, and silence in the corresponding sections of the new recording. I was recording the death of these melodies.” On 9/11, he sat with friends and neighbors on his Williamsburg roof, watching downtown New York burn while the loops played in the background. As night began to fall, he also took some video footage of the scene, images which are now as inseparable from the recording as the recording is from the event.

Wexler situates these narratives – Basinski’s biography as a gay kid from Texas who found life and expression when he arrived in the downtown New York of the 1970s; the history of the loops – within two catastrophes. One is 9/11. The second is the COVID-19 pandemic, which a year ago on struck in New York City especially hard. As to the latter, we’re also made aware of the documentary’s timing by the sometimes glitchy signals connecting subject and filmmaker, yet the inclusion of frozen screens and disconnections is kind of appropriate, since Basinski’s landmark compositions are defined by the very decay and deformation of recorded information. As documentaries go, Disintegration Loops feels a bit like a New York Times “Diary of a Song” video feature on steroids, which isn’t a criticism so much as a suggestion that there’s more left to explore beyond pandemic-driven limitations.

Lastly, the late, great Les Blank was back on screen at SXSW with a J’ai Été Au Bal/(I Went to the Dance), in a 5k digital restoration of the 1989 classic, a spirited history of Cajun and zydeco music in Southwest Louisiana, originally co-directed and produced by Chris Strachwitz of the legendary roots music label, Arhoolie Records. The feature-length stomper is packed with colorful personalities from the parallel music scenes, many of whom may no longer be physically present on the earth, but whose songs are still being played, whether in a dancehall fais do do, outdoor barbecues or folk festivals in New Orleans and Lafayette most prominently, and often by multiple generations of their own kin. Among many others in this encyclopedic two-step, meet Canray Fontenot, Nathan Abshire, Dennis McGee, John Delafose, Clifton Chenier, D.L. Menard, Dewey Balfa, Michael Doucet and Ann Savoy, one of the few women noted in the film, who also gets story credit. The music is non-stop, as is Blank’s roving camera, ever restless to find visual poetry in rural gas stations, open fields, gold teeth and accordion keys.