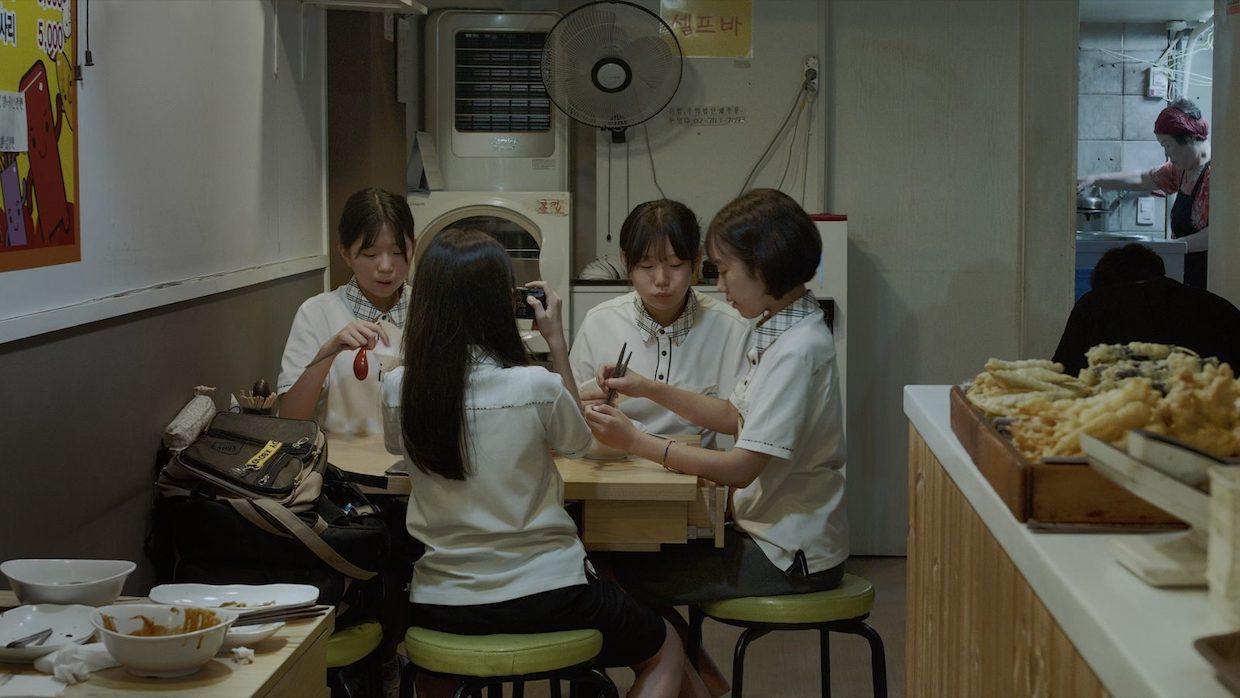 Kwol Min-pyo and Seo Han-sol’s Short Vacation is a graduate thesis film, a side benefit of which is not needing two opening minutes for production company logos but instead being able to jump right into a trim, conflict-free 79 minutes. Four South Korean middle school girls—three long-time friends, the fourth a new-in-town addition to their group—take a long train trip to photograph the rural end of the railroad line. Their photography club teacher has handed out disposable 35mm cameras with the summer vacation assignment to photograph “the end of the world,” however they’d like to interpret that. Taking the train a few hours from Seoul seems to meet the prompt for these hilariously born-and-bred city kids, who are utterly baffled by the countryside. (“Is there even anyplace to eat around here?” one wonders.) No one says anything particularly memorable or quotable for at least the first hour, but the vibe is friendly, the girls fastidious and happy amongst themselves as a quick day trip drags out into something pleasantly longer.

Short Vacation has the visual grammar of slow cinema (one shot per scene, always carefully composed and unostentatiously well-balanced) minus prolonged durational components. What takes the film to another register where it becomes more than just another installment in an accomplished lineage (RIYL: landscape shots, quoting “life is very disappointing, isn’t it?”) is its final segment, an ad hoc slumber party in which the group of four splits for a bit into pairs of more-closely-compatible twos. They muse about what the rest of their lives will be like and how sad it’ll be when they’re grandmothers—their premature gravity and nostalgia for all that’s yet to be lost is both funny and moving, not too different from the dark cloud of anticipatory disappointment that always hung over Charlie Brown. The textural gap between the grain of the girls’ 35mm still photos and the digital narrative they’re incorporated into signals its own implicit form of nostalgia for the increasingly distant past, this one the filmmakers’ own.

The main character of Jonas Bak’s 16mm-shot Wood and Water, played by his own mother Anke, has her own reasons to mourn. As a just-retired widow whose children all live elsewhere, a vacation reunion with her kids minus absent son Max, amplifies Anke’s sense of increasing loss as she prepares to enter inactive solitude. Looking at their former property by the Baltic Sea, she reflects, “The house is now a symbol of something missing in my or our life. It’s really sinking in now that that time is gone and will never return.” But after 20 or so such gently downbeat minutes, Bak executes the kind of bravura sustained shot you could chop out and show as a standalone experimental short. An upwards view of street lights smoothly glides into a tunnel, bringing Anke from Germany to Hong Kong in a seamless and magical transformation (extremely advanced iteration of Solaris tunnel shot division) that takes a moment to register.

Trying to meet Max on his home turf, Anke now enters a formally similar but tonally very different movie, consisting almost entirely of serendipitous encounters with friendly strangers conducted in mutually halting linga franca English, each of which unexpectedly enlarges her world. The sense of life as full of stroll-around possibilities is cheering, but there’s a darker context: Anke’s arrived right in the middle of the protests. Consistently rigorous compositions, including pillow shot upward glances at Hong Kong’s architecture, accordingly incorporate the marching demonstrators with equal discipline; viewed from overhead, they form top-right-to-bottom-left-frame diagonals on the street while marching to the center of confrontation. This doesn’t seem like inappropriate aestheticization but instead the respectful integration of an urgent reality a well-meaning tourist who’s still a tourist can only take in to a certain extent. I wish that Wood didn’t deploy, three times, the kind of now very-familiar music cue that could be dubbed the Drone of Memory and Melancholy—but if going that route, I suppose it’s best to go straight to the source (in this case Brian Eno’s New Space Music), and it’s a minor flaw in a very strong first feature.

A friend accurately flagged Andreas Fontana’s Azor as “objectively well-directed”: this debut feature is full of small, very worthwhile blocking decisions that upgrade potentially banal connective tissue—e.g., when Swiss banker Yvan De Wiel (Fabrizio Rangone), freshly arrived in 1980 Buenos Aires, checks in at his hotel, a medium shot from lobby center suddenly has the frame’s previously unused middle ground charged by an out-of-focus bellhop’s cart rolling past. De Wiel, a private banker, has arrived in Buenos Aires to clean up following the hasty, unexplained departure of business partner Keys. The streets are crawling with armed military, and people are being disappeared right before De Wiel’s eyes—but that, theoretically, isn’t his problem. Toggling between French, Spanish and English like a low-key Christoph Waltz, De Wiel attempts to keep his existing contracts while not getting involved, an inevitably untenable proposition both ethically and practically.

Because I had read maybe two sentences about the film before watching, all I knew going in was that Azor is a period piece shot in Argentina, which made the opening titles especially discombobulating: why so many French names, and why credits in both Spanish and French? On that level, I am immensely amused that a) this is an Argentinian-Swiss co-production (with French money in the mix as well), which is not a combination I think I’ve encountered before b) the exact historical particulars of the plot make that eminently understandable, rather than a weird case study in reverse-engineering a scenario that would implausibly justify putting those funds together. Fontana’s first feature grew from his discovery of a diary kept by his grandfather, a Swiss banker who documented his own unscrupulous Argentinian money laundering dealings in language the writer/director found surprisingly “mundane and banal.” Mariano Llinás (Extraordinary Stories, La Flor) is somewhat ambiguously credited as a “contributor” on the writing side, and if I were to see his hand anywhere it would be in a quick invocation of Borges, which connects nicely to a late scene where army members read out an insanely heterogenous catalogue of confiscated assets that plays like a nightmare parody catalogue of imaginary creatures. But while Azor initially feints at fulfilling off-kilter thriller expectations like Benjamín Naishtat’s Rojo or Pablo Larraín’s Tony Manero (movies which situate South American tragedy against unlikely genre elements), ultimately it’s a fairly straightforward, slightly underwhelming demonstration of the banality of evil.

Azor falls into the “promising, would watch next feature” category, as does another movie that likewise seems strange before flattening itself into a more standard trajectory, Jacqueline Lentzou’s Moon, 66 Questions. After years away, Artemis (Sofia Kokkali) arrives back home to suburban Athens in the wake of a medical incident that’s left her father Paris (Lazaros Georgakopoulos) incapacitated, at a level of weakness and physical lack of bodily control akin to multiple sclerosis. The film’s subtitle—“a film about love, movement, flow, and the lack of them”—promises some weirdness, as does the disorienting opening: grainy VHS home movies, timestamped from ’96-’99, of skiing slopes and other equally anonymous sites closer to home, with voiceover between Artemis and a friend gradually clarifying itself as an oblique explanation of why she left and is returning. But Moon’s unorthodoxies only erupt in discrete moments: my favorite is a shot of the cosmos, with previously unheard voices commenting on our heroine’s progress as concentric circles start emanating out of the center. (The universe cares, is watching, has its own Greek chorus.) But this genuinely novel blip comes right after one of the tarot card overhead inserts Lentzou uses to make sure her act breaks are in plain view, which is more indicative of Moon’s inevitable progression towards father-daughter reconciliation.

Lentzou thanks Paul Thomas Anderson, another fan of stringing together conspicuously odd setpieces, as one of her screenplay advisors in the credits, which makes sense. Moon‘s worth watching as the feature opening shot from a director whose eccentricities should be cultivated and encouraged, but really it’s a star-is-born moment for lead performer Kokkali. I know extremely little about the language of screen acting, nor am I the target audience for big star turns, but I wouldn’t be remotely surprised to see Kokkali rise from international arthouse lead to Nolan/Bond/M:I ensemble member in rapid time. Kokkali isn’t a total unknown: she’s worked in the Greek film industry as a credited actress of increasingly top-billed status since 2013, including in two of Lentzou’s previous shorts. On one level, the part as written is designed to be spectacular: there’s a lot of physical stuff to do (including mimicking the symptoms of MS, vocal impersonations, a game of charades enacted with nearly literally murderous commitment and a good amount of dancing), but also scenes of screaming conflict and quieter internalized suffering; Kokkali is onscreen in almost every scene. Conception is one thing, but execution is not guaranteed: she’s the real deal.

My favorite films in this year’s ND/NF all have strong roots in 60 years of art cinema in one direction or another, which always makes me suspicious: do I like this because it’s good, or because it’s familiar? Madiano Marcheti’s Madalena, a narrative about the murder of a trans woman from three different intersecting characters’ perspectives, definitely keeps crossing that line. Some of this is very of the moment: a lot of night shots are graded like Twin Peaks: The Return-era David Lynch, while a fairly spectacular drone shot makes unnerving use of a glitchy ghost’s appearance, pointing into a fresher future. But other reference points are both more direct and more familiar: two-thirds of the way through, Denis Lavant’s freakout dance in Beau Travail is trotted out for a straight-up recreation, complete with club setting and mirrored wall. This final scene has become a sort of axiom of contemporary arthouse cinema in the last 20 years: by my crowd-sourced count it’s been recreated/travestied/invoked (depending on how you want to categorize things) by at least Black Ice, Thin Coal; Beatrice Gibson’s 2018 short I Hope I’m Loud When I’m Dead; The Disaster Artist; Another Round and now here. I realize that isn’t an example of “overwhelming market saturation,” but this has ongoing cliche potential to do for the arthouse what “Ride of the Valkyries” cues once did for children’s animated movies. Different song cue or no, Marcheti’s restaging isn’t in conversation with, or in any way enriching, either its source or itself.

The first two sections center, respectively, around the titular Madalena’s friend and the property owner of the land she’s found on. That decision raises an obvious question about why a narrative predicated on a dead trans body (itself an ideologically suspicious prompt that centers transness within violence and tragedy) grounds itself in the perspectives of cis characters: is the dead girl just a prompt for their character arcs? By grounding itself in Madalena’s queer/trans friends, the last third attempts to rectify that implicit absence, climaxing in a riverside idyll among friends far from town, free to swim and lounge comfortably in their own bodies without hostile eyes around them. The ideological stance here is very clear, as is (again!) the model being traced over, in this case the ending stretch of Blissfully Yours—not just in the setting and vibe being aspired towards, but down to the choice to have a title card after the last shot that retroactively sours the mood by pointing out the systemic hostilities malignly structuring the characters’ lives (migrant status in Blissfully, transphobia in Madalena). But during that closing bliss-out, something unexpected happen: in the middle of a prototypical Apichatpong Weerasethakul shot, one of the women poses for a social media shot, trying a dragging-hand-across-thigh pose before going for hand-under-chin. That part was new and made me feel weirdly secure: maybe now-old-forms can still accommodate new realities.