“A Dream of Education”: Reel Works Celebrates its 20th Anniversary 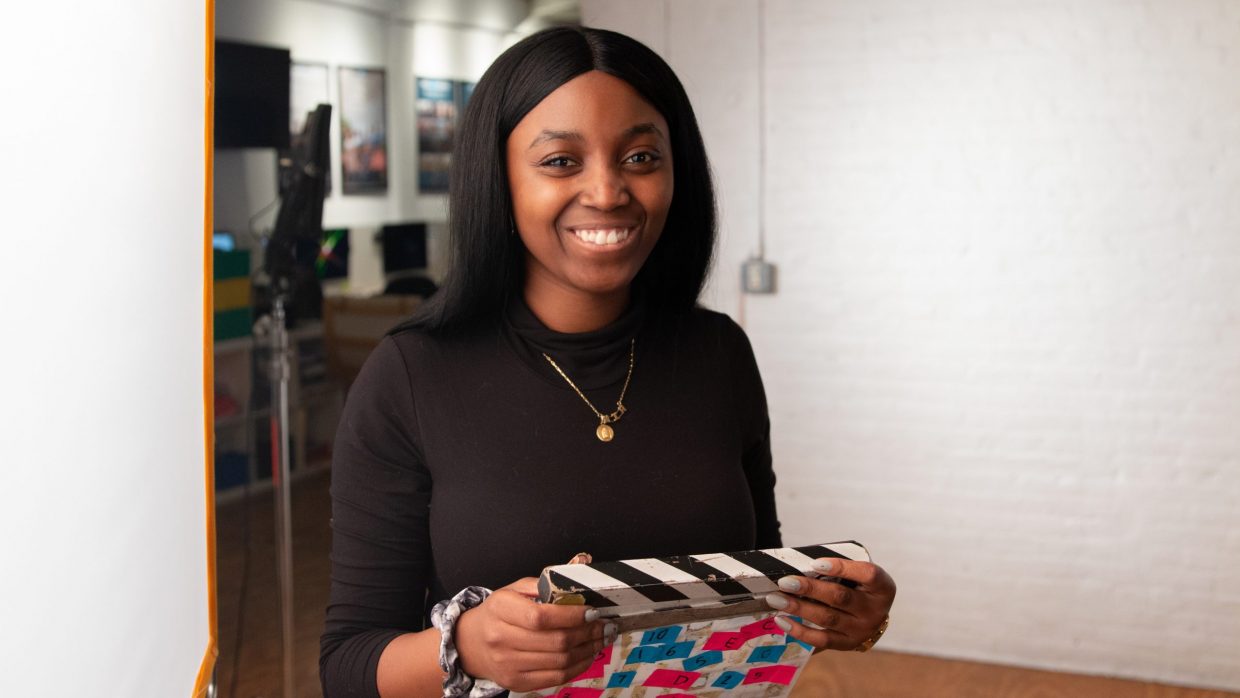 by Dominique Castanheira
in Filmmaking
on May 20, 2021

When Maya Velazquez’s teacher told her class about Reel Works, the ninth-grader at Park Slope Collegiate had no idea what story she wanted to tell, only that filmmaking was something she wanted to try.

Cultivating that spark of interest is what Reel Works, a New York-based nonprofit organization that teaches filmmaking to students, has done for the past two decades. Reel Works now celebrates its 20th anniversary and will host a 20th Anniversary Gala on May 26. And while the COVID-19 pandemic disrupted the global film business in 2020, Reel Works actually had its most successful year yet, serving an all-time high of nearly 800 students across its different programs.

Stephanie Walter Williams, the co-founder of Reel Works, described the organization’s start as “a happy accident.” She and husband John Williams began the organization in 2001 with the goal of developing the complex voices of teenagers at the Prospect Park YMCA. “We fell in love with [the] kids,” Walter said. “They were so honest and open, and the stories they wanted to tell were really riveting… they all were so honest in their exploration of being a teenager.” The organization has since expanded to include in-school and after-school programs, partnered with companies such as HBO and Netflix, and seen its films earn five Student Emmys. 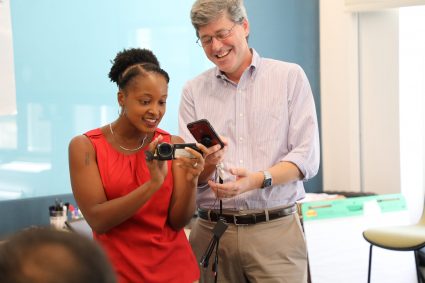 At its start, 2020 promised an exciting line-up: Reel Works’ workforce development program, MediaMKRS, had launched just one year prior. Additionally, Reel Works Productions, a youth-led production company, was starting to shoot a documentary on the Gibney Dance Company, a dance organization with two locations in New York City. Over 300 dancers and the Gibney staff began shooting while talk of a potential virus reaching the city were merely rumblings.

Then the pandemic hit, closing Reel Works’ classrooms and halting productions. Adapting to remote learning, the organization shifted its programs online and expanded its offerings. It held its first ever all-virtual filmmaking workshop, worked with the Academy of Motion Picture Arts & Sciences to host weekly master classes with Hollywood stars such as Whoopi Goldberg, and taught filmmaking nationwide to students in locations like the Wind River Indian Reservation in Wyoming in partnership with Paramount Network.

Reel Works also reconfigured the MediaMKRS program, a workforce experience partnership with the New York City Mayor’s Office of Media and Entertainment, the City University of New York, and unions and media companies. With film production largely shut down due to the pandemic, students were worried about not being able to gain work experience. In response, MediaMKRS offered remote internships with companies like Harbor Picture Company and collaborated with WarnerMedia Access to offer a free post coordinator training program.

“What we learned over the last year is that we really could reach more people with arts programming and career exploration through the virtual landscape,” Keisha Katz, director of workforce and external partnerships at Reel Works, said. “It’s been really exciting to see that happen.”

The Gibney Dance feature documentary was put on hold until May of 2020, when the team began shooting again. The documentary, which focuses on the growth of a dance company as it incorporates new dancers and reimagines its classes due to the pandemic, mirrored the experiences of those at Reel Works. Dancers performed individually wherever they could find space, whether that meant on rooftops, on the awnings of buildings, or inside apartments. Interviews were conducted over Zoom and, later, in a socially-distanced setting.

Beginning to work on the Gibney Dance feature documentary was like “falling into water,” said Xander Bernabe, a 17-year-old who is an assistant editor on the project. He described his experience as interesting and educational, since he works in-person on tasks he’s new to, such as transcribing hours of interviews.

Despite the workload, Reel Works serves as a safe haven for its students, especially during the isolation of a pandemic. 17-year-old Anthony Chan said that Reel Works has “definitely” given them a sense of community—seeing friends, meeting new people, and learning about filmmaking made life at home less lonely.

Before participating in Reel Works, Chan had planned on being an aerospace engineer or computer scientist. But when they lost their grandmother, Chan joined the 2018 Documentary Lab at Reel Works to create a film as tribute to her, So Close Yet So Far, which drives home the importance of families spending time together. While convincing their family to open up about their grandmother was difficult, Chan appreciated the sense of freedom in filmmaking and is now interested in pursuing a career in animation.

“That’s what’s pushing me to create more films—to entertain people,” Chan said. “Being at Reel Works has shown me that you can make a living out of your creativity.”

Now both an arts organization and a workforce development program, Reel Works serves as a springboard for students to work in the media and entertainment industry. That drive has delivered results: 53% of Reel Works’ graduates pursue a career in the industry, at companies such as CBS, HBO, and CNN.

Naiquan Greene participated in the 2005 Documentary Lab to explore his interest in filmmaking and recently rewatched his documentary for Reel Works’ “20th Anniversary Films” series. The YouTube series highlights films such as Javon Walker-Peters’ short documentary, #ICan’tBreathe, which speaks out against racially-motivated hate crimes, Chris Irizarry’s Happy Ending, about a young man facing his mother’s addiction and the loss of his family, and Kiri Davis’ A Girl Like Me on the standards of beauty placed on Black girls. Greene’s film, Superstar, explores his burgeoning awareness that not everyone’s dreams come true. 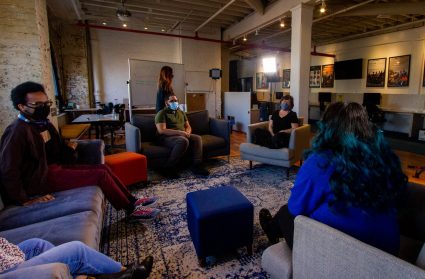 But while his first documentary focused on unrealized dreams, Greene is, at 32 years old, now the Senior Interactive Producer at BET Digital. He said that his experience at Reel Works was eye-opening and led him down his current career path by introducing him to background work in media.

“Reel Works provides a safe haven and opens up a lot of minds to the opportunities that can happen in media,” Greene said.

Maya Velazquez agrees. Although she hasn’t always known she wanted to pursue film, since participating in the 2019 Documentary Lab, Reel Works has become a safe place for her because of the trust she has in the community. Reel Works is made up of more than just students and teachers—a pillar of the program is matching each teen participant one-on-one with a professional filmmaker-mentor.

Working with mentor Prisca Edwards throughout the filmmaking process, Velazquez created Normal Family, a short film telling the story of her moms and her discovery of their coming out story. Having never made a film before, Velazquez wanted to focus on a topic that was important to her and settled on an idea that would strengthen her understanding of both storytelling and her family. Now 15, she wants to make visual art on different social issues, such as homelessness or the LGBTQ+ community.

“I’m learning a lot about film and what career path I want to go down—maybe an editor or screenwriter,” Velazquez said. “Reel Works really showed me this new world.”

Velazquez’s desire to include diverse stories in film resonates with Reel Works’ view that changing the storytellers can change the world. With people of color comprising over 80% of its students and its expansion into workforce development programming, Reel Works shows dedication to increasing equity and equality in the industry. Williams said he sees Reel Works growing to become a national organization to build a more inclusive media workforce.

In addition to its nationwide programs through partnerships with Paramount Network and WarnerMedia Access, Reel Works is working with Netflix and IATSE to expand its union production training programs beyond NYC. According to Walter, Reel Works is interested in expanding to the Rust Belt and parts of Appalachia that are underserved to share the stories of students in remote areas. As Reel Works celebrates its 20th anniversary, the organization both reflects on milestones it has passed and looks forward to opportunities the future holds while staying true to its mission of empowering youth to share their stories through filmmaking.

“That’s my dream,” Walter said. “It’s a dream of education.”

Broadway’s Bryan Terrell Clark will be hosting the Reel Works 20th anniversary fundraiser, which will also a honor industry leaders who are paving the way in terms of diversity and representation. This year will honor Issa Rae (Insecure) and the Inclusion Rider Trio: Fanshen Cox, Tasmin Plater and Kalpana Kotogal. Additionally, Variety will be giving its Inaugural Variety Voice of Inspiration Award to filmmaker Eddie Huang at the event. Tickets to the virtual event are still available here.