Tribeca Critic’s Notebook: My Heart Can’t Beat Unless You Tell It To, Roaring ’20s, Italian Studies 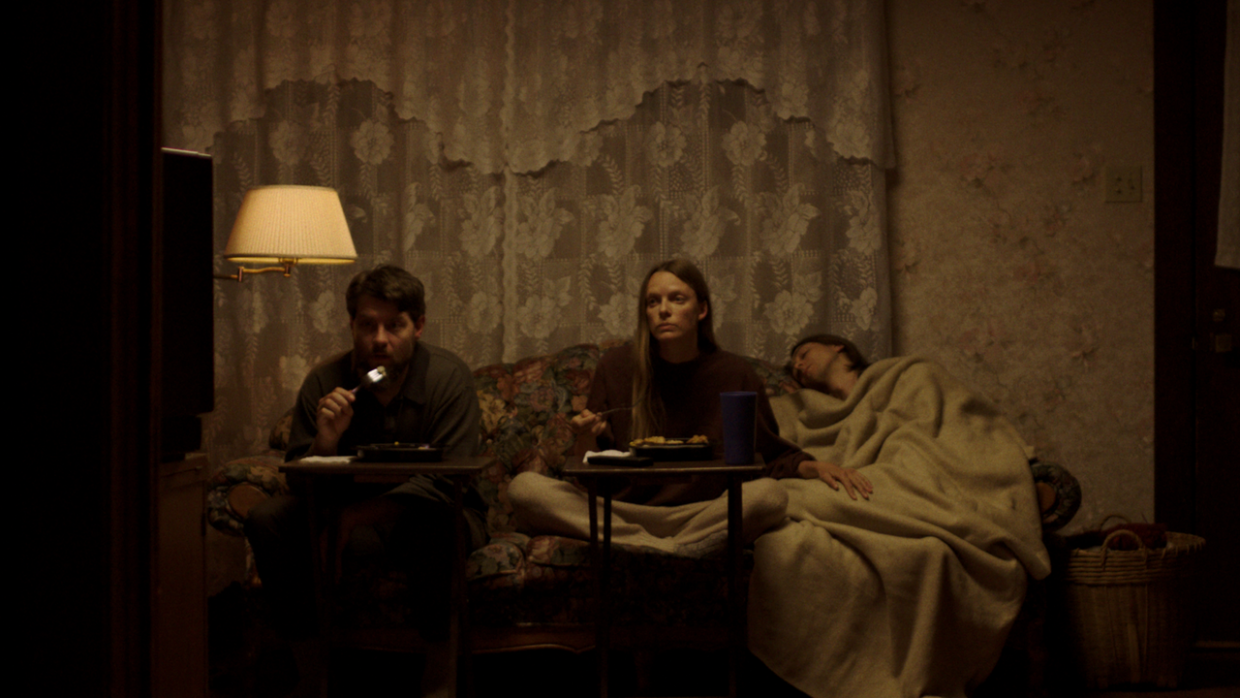 My Heart Can't Beat Unless You Tell It To

Blood’s thicker than the mud in the family affair that is My Heart Can’t Beat Unless You Tell It To, a contemporary vampire tale utterly stripped of the genre’s romance. In place of mythic hoohah, writer-director Jonathan Cuartas focuses on the grim, quotidian details of day-to-day caregiving for an extremely pale invalid named Thomas (Owen Campbell), a frail wisp of a young man who is wholly dependent on older siblings Dwight (Patrick Fugit) and Jessie (Ingrid Sophie Schram) for survival, sheltered inside a drab house on the forgotten edge of an anonymous city, its every window blanketed from fatal sunlight. As we discover in the opening scene, there’s a steep price for Thomas’ homecare. Dwight circles the outskirts and alleys of town in a pickup truck, scoping for vulnerable outsiders (bums, sex workers, Mexican laborers) to pretend to assist, only to bludgeon them with a baseball bat, drag inside the house and drain of blood for Thomas. His sallow-faced sister enforces this untenable process, when she’s not waitressing for the tips that sustain them, supplemented by the petty cash they collect selling their victim’s clothes at a thrift shop. The makeshift backyard cemetery is getting mighty crowded.

The minimalist drama missed out on its intended theatrical premiere at Tribeca Festival last year, screening on a virtual platform only, but took a victory lap last week with final festival screenings before its imminent release to theaters, on and offline. (I’ve been a fan since glimpsing a working cut during 2019’s US in Progress, the industry sidebar to the American Film Festival in Wroclaw, Poland). It’s a family portrait about to fall apart in the frame. While Jessie remains stoic and focused to a sociopathic degree, Dwight can barely take it anymore, his half-hearted efforts at kidnapping and serial homicide increasingly botched and bungled. When he suffers a nasty puncture wound and his prey escapes, it recalls Macon Blair’s haphazard struggle for brutal revenge in the thriller Blue Ruin (whose director Jeremy Saulnier described it as something like No Country for Old Men but “the killer’s an idiot.”). If viewers recall Fugit as that sweet kid from Almost Famous, the effect is even more disruptive.

When Jessie targets a prostitute she spies working out of a motel, Dwight befriends her rather than kills her, fantasizing that they can leave town together. Fat chance, buster. Meanwhile, the housebound Thomas yearns for connection beyond his bedroom, a breath of fresh air, a new friend. Everyone is briefly distracted from their angst by sweet moments of family bonding, singing along with a second-hand boombox and microphone purchased on a thrift run. (The film’s title comes from a lyric to the song “I Am Controlled by Your Love,” a late 1960s hit off the Deep City label, produced by Cuartas’s fellow Miamian, Clarence Reid).

Working with his brother Michael as cinematographer and father Rodrigo as production designer, Cuartas emphasizes an achingly deep sense of isolation and loneliness that may register more strongly with folks coming out of a pandemic. The forlorn vibe resonates in the glimpses of gas stations, empty parking lots, cheap motels and weathered signage – the America of Stephen Shore Polaroids – and in the symphony of shit-brown tones that make up the interiors of the family home. It’s a place of suffocating drabness. Even an occasion of joy, the pleasure Thomas takes in a paper airplane, holds unseen portent for bad trouble. And yet, the film wears its heart on its gore-splattered sleeve. In the darkest of ways, it’s an affirmation of compassion without limits.

If Heart Can’t Beat is one of those movies made before the pandemic that plays better in this “hot vax summer,” the French excursion Roaring ‘20s is a project made in response to and amid the global crisis. The broad concept is a European remake of Slacker, with the camera tracking a couple of dozen characters who traverse Paris in a single day. In effect, its sequence of mobile vignettes has some moments that punch through the design – a single, roving 90-minute shot – and stick, either because of an actor’s performance or the evanescence of a passing scene, but the sum of these many parts feels ultimately negligible. That’s not to say it’s not entertaining. The ensemble is lively, and the brisk ramble through the Paris streets provokes an intense nostalgia for the City of Light. Made on the day after lockdown ended, the collaborative effort is directed by Elizabeth Vogler, who also shot and co-wrote, a pseudonym and nod to the dumbstruck actress played by Liv Ullmann in Ingmar Bergman’s Persona. The array of almost exclusively millennial and Gen Z characters, strolling mostly maskless through the world, made me imagine that everyone over, say, age 35, was inside hiding from them, still riding out the lockdown. A Tribeca jury awarded the film a cinematography prize.

Writer-director Adam Leon (Gimme the Loot, Tramps) continues a string of New York-set dramas and has something similarly perambulatory going on in Italian Studies. It’s a film that likewise transpires mostly on city streets with an ensemble of young actors and an emphasis on random encounters to mark narrative progress – although events flicker back-and-forth in time as well as imagination. The structure seems meant to emulate the brain fog experienced by Vanessa Kirby’s Alina, a British short story writer (we learn) who is stricken with amnesia during a visit to NYC, and who spends a lost couple of days or hours piecing together her identity. The gorgeous camerawork (by cinematographer Brett Jutkiewicz) captures the mildly narcotic romance of the city’s nightscape embraced by anyone who ever spent a long night wandering around, drunk or high, like a flaneur in free fall (although the real-life soundtrack would probably be hip-hop or cheesy pop, not the glistening rapture of a Nicholas Britell score). A chance encounter with a gawky, socially intrusive teenager (Simon Brickner) in a hot dog shop leads Alina into a kind of rabbit hole, and the company of a group of high school performers and artists, as she slowly puts together her identity. There’s more to it, but not too much more, and things may have felt more purposefully surreal if the mysterious air of confusion had been sustained, like some latter-day Kiarostami reality loop.