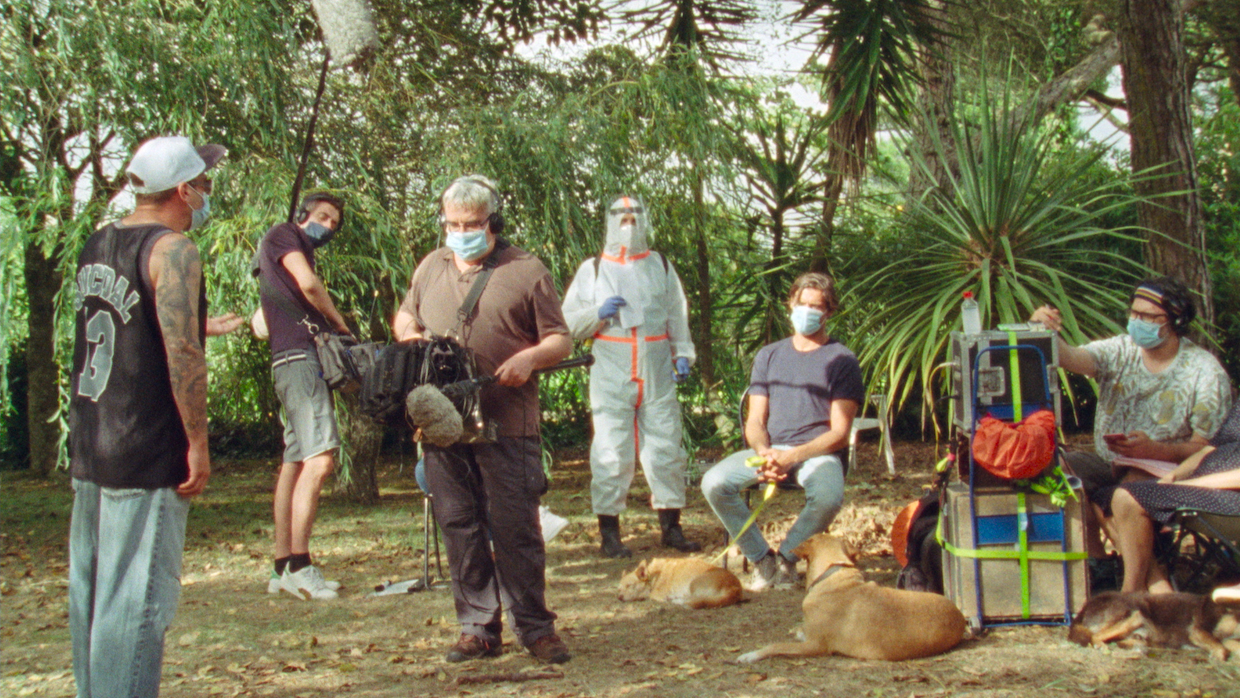 Films in this year’s Cannes (especially the better ones) have been prone to metafiction—demonstrating and examining the process of making movies, creating images, writing and rehearsing scenes, or editing sound, putting the creative process on full display. It’s hardly a new trend in art cinema—make what you know, love and experience, and your livelihood is bound to bleed in some way or another—but self-reflexity is clearly in style, and Miguel Gomes & Maureen Fazendeiro’s structural, faux making-of puzzle film The Tsugua Diaries may be the most exemplary case. True to its title, the diaristic Tsugua fictitiously dramatizes its own production, which disintegrates after a breached health and safety protocol. Thrown in on Day 22, we begin with a cryptic view of three Portuguese thirty-somethings (Crista, Carloto and João) grooving to Frankie Valli & The Four Seasons’ 1972 northern soul hit “The Night” in a rural cottage. As in much of Gomes’s work, there’s an anti-narrative attitude to the way information is delivered; characters are introduced coyly, in media res, pretty bodies in grainy compositions acting out conflicts for which motivations can only be intimated. Image and tone are dreamlike, filtered in green then violet then magenta, as characters repeat one another’s monologues in one another’s presence within the same scene. Compounding viewers’ cognitive instability, Tsugua (i.e. the beloved month of “August” spelled backward) progresses from its opening sequence in reverse—to Day 21, then the 20th, the 19th and so on—divulging consequence and resolutions before action.

While Christopher Nolan and Gaspar Noé famously employed similar conceits to unveil their narratives’ false initial premises, Gomes and Fazendeiro have more relaxed and material interests. They linger, for instance, on a pair of quince fruits (de-)composing across the three week span, the methodical (dis-)assembly of a butterfly house and a filthy swimming pool being cleaned. Unknowns abound, keeping our curiosities afloat, as if the directing pair fears that psychology would overburden the proceedings and betray the truth of the situation they’re re-presenting. The fiction’s emotional axis would seem to hinge on Carloto and Crista’s doomed romance, but that gets undercut when their Day 11 tryst—seemingly included in order to develop their arc—is quickly diverted by a man who complains that Carloto is wearing his socks sans permission. There’s a utopian bliss to the directionless, self-sufficient world these characters manufacture for themselves, one the film itself wants to partake in. As Tsugua creeps ever closer to its true beginning, the reintroduction of bodies, leadership and protocols is deliberately oppressive, then farcical. (Gomes, playing himself, jumping up and down on the back of a tractor that he impulsively decides to include in his movie within the movie, is wholly endearing.) Without describing too much, the film’s 2020 production ensures that the pandemic has a significant presence, and it indeed comes closest to giving shape to a trajectory that would rather be shapeless. In our return to something like normalcy, Tsugua suggests an alternative where we might benefit from the freedoms in disorder.

By now, unfortunate comparisons between Julia Ducournau’s Titane and the work of Canadian filmmaker David Cronenberg (especially his 1996 J.G. Ballard adaptation, Crash) are rampant. Yes, Ducournau is unambiguously a fan (she’s cited him and Lynch as her two major influences), the commonalities are largely cosmetic and threaten to mitigate the film’s more pointedly queer agenda. In truth, if I were compelled to put Titane in conversation with any particular filmmaker’s work, I might find Tarantino and his brand of cool, masculine violence much more generative, namely his stabs at feminism in Kill Bill (2003/2004)—which no doubt inspired Titane’s “She’s Not There” needle drop—and especially the mechanophilic Death Proof (2007). Ducournau’s film centers around Alexia (Agathe Rousselle), whose sexual attraction to cars is the narrative’s driving force. The movie opens with a prologue wherein she has a titanium plate installed in her skull after she barely survives a gruesome car crash—an accident she incited by incessantly “vroom-ing” in the backseat, sending her irascible father (Bertrand Bonello in some inspired casting) and his car into a literal tailspin. All grown up, Alexia works as one of the star dancers at an auto-themed burlesque, where she courts club newcomer, Justine (Garance Marillier, lead of Ducournau’s debut film, Raw). Off the job, she also casually murders people with a hairpick and engages in lustful sex with a decked out lowrider covered in flame decals.

To Titane’s benefit, Ducournau favors characters’ compulsive decision-making and her narrative’s propulsive momentum over realism or any notions of credibility. This is an ostentatiously muscular production, and it wants our attention on, among other stylistic choices, its handful of showy, extended tracking shots that wind through dense, crowded spaces; a sound mix with the bass dialed well beyond 10; and brutal, startlingly visceral displays of violence inflicted on so many human torsos and faces—wounds that, significantly, are rarely if ever delivered from a man to a woman. Dialectics abound, as a woman secretes black engine oil from myriad orifices, and a roided-up man longs to maternally nurture someone, anyone, whoever will pose as his child—woman as machine, man as mother, cultural wires crossed for both provocation and poetics. Titane is a massively well-crafted film that I found both juvenile and uncommonly invigorating. If it feels radical, it’s because these kinds of images and ideas, as manufactured by a maker of Ducournau’s gender, have to this point not gotten this kind of studio funding and commitment.