Newsletter of the Year: Why Screenwriters Should Read George Saunders’s A Swim in a Pond in the Rain: In Which Four Russians Give a Master Class on Writing, Reading and Life 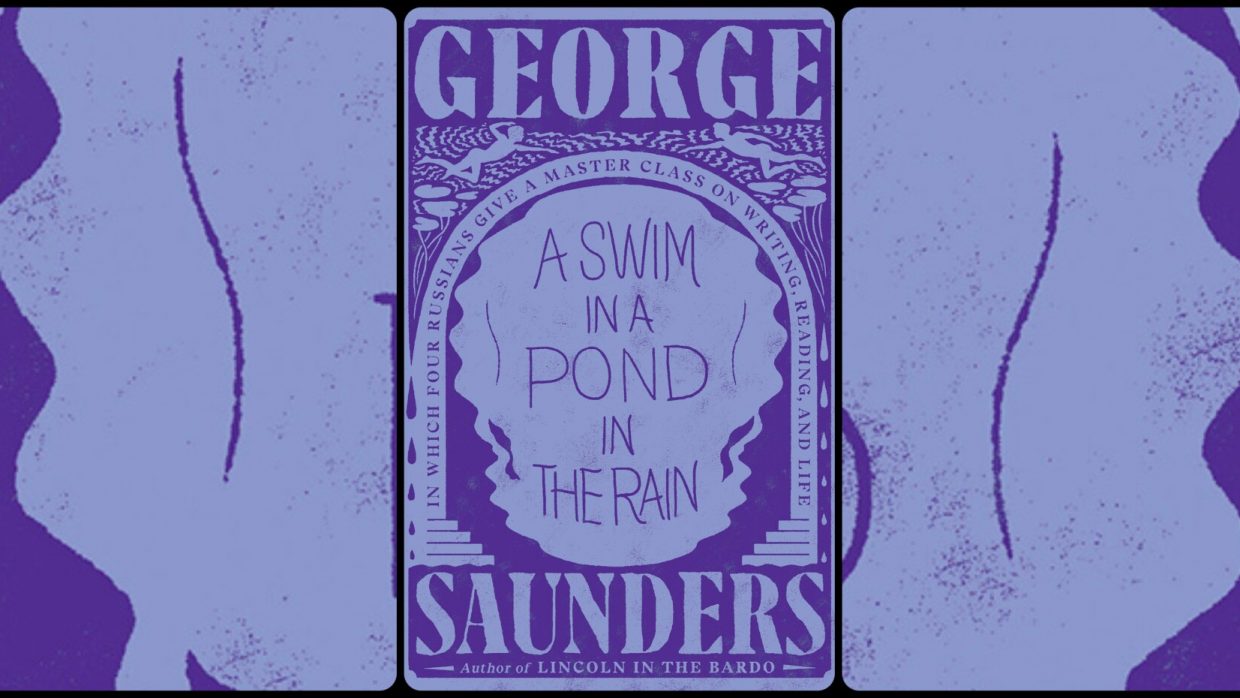 Each Friday I write an original Filmmaker newsletter, which is free to all. Always original and not archived on the site, they consist of various musings, thoughts, link recommendations and sometimes even early versions of pieces that appear later here. And while yesterday’s “Top Ten New Posts of 2021” was determined using Google Analytics, I’ve chosen today’s “Top Newsletter of 2021” purely empirically. Forget Mailchimp open rates, this newsletter about George Saunders’s book on writing and Russian literature, A Swim in a Pond in the Rain: In Which Four Russians Give a Master Class on Writing, Reading and Life, is simply the one that I received the most direct feedback on. Readers emailed to thank me for recommending the book, and execs at two well known companies both wrote to say that, in one case, the book was already in circulation among story execs while, in another, the exec was promptly ordering it.

This 2021 pick, which has been lightly reedited, is particularly well-timed because, in addition to buying the book, readers can also join its extension: Saunders’s new Substack, Story Club with George Saunders. Posting about twice a week, Saunders is continuing with the book’s pedagogical drive, mixing commentary on his own process with breakdowns of other works, starting with Ernest Hemingway’s story, “A Cat in the Rain.” There’s also a community of readers sounding off in the comments, and, kudos to Saunders, he’s actively responding. The Substack is free for now but a paywall will go up soon. — SM

It’s been a long time since I’ve read a book on writing screenplays. My first job in film was as a reader for New Line Cinema, and before the job I made sure I had read the standard text of the day, Syd Field’s Screenplay. Despite the fact that all the execs at the time were taking Robert McKee’s two-day course and raving about it, I waited to read the Adaptation-depicted guru’s Story… until I eventually did. But both readings were a long time ago, and if someone asked me what to read today, I’d have no opinion on Save the Cat! or any of the other books that have arrived in the years since.

But I did just finish a book I would recommend to screenwriters, although I didn’t know I’d feel that way when I started it. The book is George Saunders’s new A Swim in a Pond in the Rain: In Which Four Russians Give a Master Class on Writing, Reading and Life. It’s basically a book version of a writing class on Russian literature he teaches at Syracuse University, and it consists of six stories by Chekov, Tolstoy, Gogol and Turgenev coupled with Saunders’s breakdown of how these stories work. The latter clause is important: this isn’t — sometimes confoundingly so — literary criticism of a cultural or historical bent. This is about craft — how these stories produce the effects in the reader that they do. As such, Saunders’s observations on how character is drawn and then modulated, how narratives create suspense and surprise, and how larger themes inform action are solid instruction that can apply to the writer of any sort of fiction, including screenplays.

More than novels, which are a more capacious form, short stories especially lend themselves to film. Or, perhaps, dissecting a short story can produce revelations that carry over into critiquing a screenplay. In his comments on Chekov’s “In the Cart,” for example, Saunders discusses the writer’s specific depiction of a peasant woman journeying to town before landing on this nearly simplistic but nevertheless important observation: “As a particular person gets made, the potential for what we call ‘plot’ increases.” Think of how many scripts you’ve read that read mechanically not because the story beats are boring but because the protagonist is so generically drawn that the beats don’t have enough psychology and backstory to bump up against. And about structure, from the same analysis, Saunders contributes this elegant aphorism: “We might think of structure as simply: an organizational scheme that allows the story to answer a question it has caused the reader to ask.” He goes on: “We might imagine structure as a form of call-and-response. A question arises organically from the story and then the story, very considerately, answers it. If we want to make good structure, we just have to be aware of what question we are causing the reader to ask and then answer that question.” (Years ago, the editor Jim Lyons said something similar to me about his process of cutting feature films, attributing the wisdom to Roland Barthes’s S/Z.)

A blunter and funnier dictum is Saunders’s line about “ritual banality avoidance”: “If we deny ourselves the crappo version of our story, a better version will present itself.” And then there’s perhaps my favorite discussion in the book, which has to do with what Saunders calls “polemic” but which I feel applies to many scripts I read. These are scripts that take a protagonist on a tortuous journey towards an overly simplistic resolution, one that feels too tidy on the page. Saunders writes, “[A]s a technical matter, fiction doesn’t support polemic very well. Because the writer invents all the elements, a story isn’t really in a position to ‘prove’ anything. (If I make a dollhouse out of ice cream and put it in the sun, it doesn’t prove the notion, ‘Houses melt.’)” This is not to say that a work of fiction can’t make political points, just that a story shouldn’t be simply “a delivery system for [the author’s] ideas,” a point he drives home in his discussion of Chekhov’s “Gooseberries.”

But what I liked most about the book — aside from the opportunity to visit and revisit these classic stories — is the emphasis Saunders places on complexity, contradiction and irony. As much as he breaks down the mechanics of writing in service of things like character and theme, he ultimately valorizes elements of a story that are near ineffable, correctly identifying these as the ones that make it great. The final story discussed is one by Tolstoy, “Alyosha the Pot,” and Saunders admits that both his own attitude toward it, and his interpretation of the ending, have changed drastically over the years he’s taught the course. That’s not a failing by any means; it’s that mysterious ambiguity, what Saunders calls the “wisdom of omission,” that has allowed the story to survive and move us many decades later.

In any case, I could quote from this book all afternoon but it’s past the time I have to hit send, so I’ll do that now. Suffice to say that if you want to look at your own screenplay with a fresh set of eyes, consider reading this book and letting Saunders and his four Russians inspire the revisions in your next draft.

See you next week.