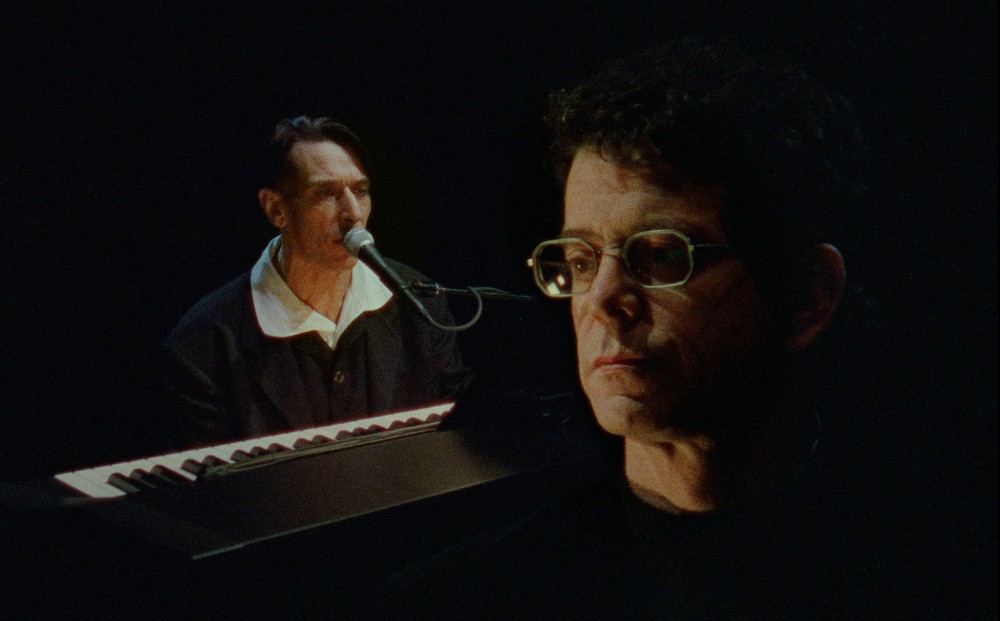 Not merely an addendum to Todd Haynes’s The Velvet Underground, Ed Lachman’s Songs For Drella is a ravishingly beautiful, sometimes thrilling audiovisual recording of a song cycle by Lou Reed and John Cale, the founders of the Velvet Underground. Cale and Reed’s early musical collaboration as the VU was inspired but unlikely – they had diametrically opposed musical roots and passions. Short lived as the band was, it became the source for punk, glam, and whatever followed from those fundamentally subversive pop genres. The VU began sliding toward death when Reed effectively fired Cale in 1968. (He had fired their first producer, Andy Warhol, months earlier.) It was an ugly break-up, but 20 years later, at Warhol’s funeral, Julian Schnabel, who never feared being the bull in the china shop, suggested to the estranged musicians that they collaborate on a tribute to Warhol. The result was Songs for Drella, performed live, first at St Ann’s in 1989, and then in 1990, at the Brooklyn Academy of Music as part of the Next Wave series.

Lachman was commissioned by Britain’s Channel 4 to direct a documentary of the BAM performance. Reed, who refused to allow cameras to be set up between him and the audience, agreed to repeat the entire show on stage, just for Lachman’s purposes. Nothing could have been better. Lachman had the opportunity to record the entire piece with multiple cameras, often shooting in close-up, to change the lighting for each song, even to lay tracks for camera movement. The result is an extraordinary intimacy with both Reed and Cale – the lenses bring viewers closer to each of them than they actually were to each other. The piece was blocked with Cale seated at his keyboards and occasionally standing to play his electric viola, and Reed seated with his guitar at the opposite end of the wide stage. Both are at the height of their powers. (Extended close-ups of Reed’s fingering are extraordinary.) Aside from the lights focused on the two performers, the stage space is dark. Occasionally photographs are projected on a screen at the back – mostly images of Warhol and of the denizens of the Silver Factory where the VU was the house band.

Songs for Drella is a portrait of an artist whose primary genre was portraiture. The songs, which are all credited to both Reed and Cale, follow Warhol from his arrival in New York until his death. The lyrics are mostly couched in the first person. Reed and Cale imagine Warhol’s inner thoughts and feelings, and sing as if they are transmitters for words he might have spoken to himself. It’s a haunting symbiosis – a fluid merger of the identities of performers and their subject, who was no longer among the living. The Warhol that Reed and Cale conjure is vulnerable, sad, and finds salvation only in work. What makes the piece both moving and also frustrating for the writer/performers and the audience is the tacit admission throughout the songs that “Drella” is beyond their grasp. (A combination of Dracula and Cinderella, the nickname Drella was coined by Factory superstar Ondine. Warhol was said not to appreciate it.)

In 1990, Reed and Cale recorded a CD of the songs; Lachman’s doc was broadcast in Britain and the US in 16mm prints that were, well, drab. Clips from the film have been floating around online for decades. When Lachman began working on The Velvet Underground, he mentioned to Haynes and one of the producers, Carolyn Hepburn, that he had been searching for years for the original Drella film materials. Then during the Covid lockdown, Lachman started going through boxes of film stuff that his preferred lab, DuArt, had returned to him when it closed. In one of them were the A and B picture rolls of Songs for Drella. Lachman supervised the digital remastering of the 16mm original, intensifying the color and heightening contrast so that the chiaroscuro lighting makes the performers, particularly Cale, look like Renaissance princes. Lachman used the live sound from the performance, which Reed had remixed for the Drella laser disc. Since the sound had been compressed for the disc, Lachman got the original mixed track from Warners. A sync issue caused by a frame rate difference between picture and sound was digitally solved.

Lachman’s Drella is much more than a document of a memorable musical theater performance. It offers an intimate look at Reed and Cale collaborating in the eternally present moment of a live performance. Cale’s gaze constantly shifts between his keyboards and Reed, who’s in his own world, at the opposite end of the stage, much as an accompanist glances at the soloist in an offer of support if needed. It is telling  that Reed almost never reciprocates. For a live audience in a theater as large as BAM, Reed would have seemed the star and Cale, merely his helpmate. But the camera sees a different dynamic. It’s Cale’s energy and concentration that orchestrates the performance. And it’s thrilling, although not a surprise, that it is Cale who takes a performance that has become emotionally flat (too many songs indistinguishable from each other, and Reed too defensive against feeling anything at all) to another level with the show-stopping  “A Dream.” The longest song in the cycle, its lyrics are spoken, rather than sung, by Cale as he picks out the melody on his keyboards and Reed adds floods of reverb to his guitar. The lyrics tell of an abandonment dream – you’re in a room with people you know but they don’t speak to you, and perhaps that means you’ve died  or at least died to them. What horror. At a New York Film Festival screening of Drella, the audience broke into applause for the first time at the end of “A Dream,” and the emotions that surfaced were sustained in the next number, also voiced by Cale, “Forever Changed.” After which, it was left to Reed to throw cold water on the display of sentiments, with “Hello, It’s Me.” His final “Goodbye Andy” is as deadening as lead weights on a corpse, not only Warhol’s, but that of the creative collaboration which produced this otherwise revivifying live performance and its movie record.

Songs for Drella is currently playing, through October 27, at New York’s Film Forum, with Q&A appearances by Lachman and restoration producer Carolyn Hepburn. Check the Film Forum website for showtimes.