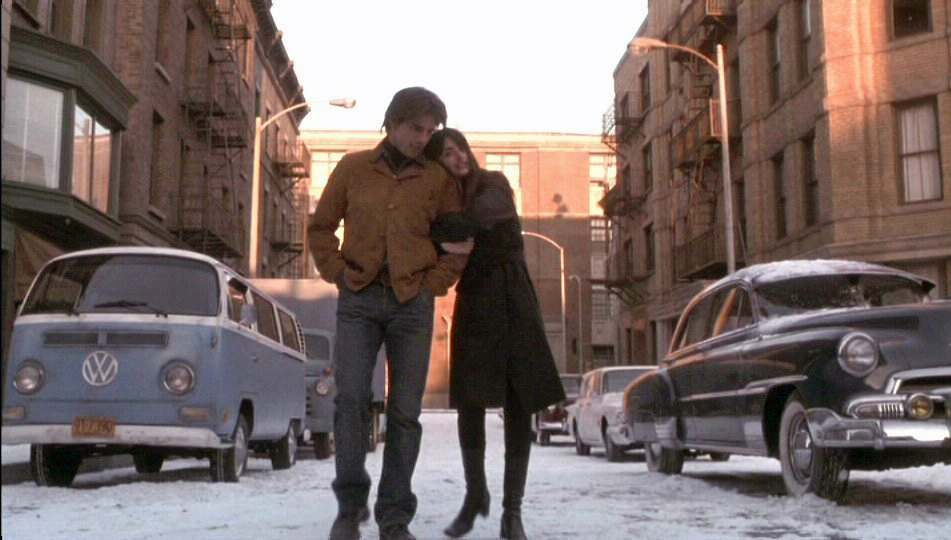 Compiling my annual list of the year’s ten best Blu-ray releases (or, to be more accurate, my ten personal favorites), I have come to the conclusion once again that reports of the death of physical media have been greatly exaggerated – there were easily another three or four dozen titles in 2021 worthy of placement on the list, and I can’t even begin to claim familiarity with more than a small percentage of everything that was released. But these are ten titles I can confidently recommend, not only for the fine transfers of superlative films but for the lovingly produced special features that accompany them.

Almost Famous, Elizabethtown and Vanilla Sky (Paramount) I’ve always enjoyed writer-director Cameron Crowe’s movies upon release, but revisiting them years after the fact tends to be even more enjoyable; when he was making these films 15-20 years ago I took them for granted, not realizing how rare his gift for nakedly confessional filmmaking within the Hollywood system was – or how much rarer such well-resourced dramedies for adults would become. Paramount’s new Blu-ray releases of three of Crowe’s best all contain gorgeous new transfers and generous extra features, many of which feel as intimate and handmade as the films themselves. Interestingly, the most idiosyncratic of the three movies is the one that didn’t originate with Crowe; Vanilla Sky began life as the Spanish film Abre los ojos, which Tom Cruise brought to his Jerry Maguire collaborator as source material for a remake. Crowe’s “cover version” is relatively faithful to Alejandro Amenabar’s original yet also a wholly uncompromised personal statement, a compendium of Crowe’s pop culture obsessions and moral preoccupations delivered in the form of a wild cross between romantic comedy and sci-fi flick that’s also a reality-bending dream movie in line with similar films of the era like Mulholland Drive, Femme Fatale, The Matrix, and Cruise’s earlier Eyes Wide Shut.

Citizen Kane (Criterion) Back in 1984, the Criterion Collection changed film buffs’ lives (and finances) forever when they launched their company with a state of the art Laserdisc presentation of Citizen Kane. This year they inaugurated their 4K line with a spectacular four-disc edition of the same film, an all-you-can-eat buffet of scrupulous film scholarship, intoxicating show business nostalgia (the Dick Cavett and Merv Griffin excerpts alone justify the purchase of the set for a talk show junkie like myself), and detailed technical data. The curation of special features is flawless; it took me a solid week to get through everything, and every supplement, from the vintage and contemporary interviews with Welles collaborators and historians to the archival documents and designs, is essential viewing. My personal favorite extra is the brand new audio commentary by Welles experts Jonathan Rosenbaum and James Naremore, who miraculously find new things to say about this most analyzed of all American films – even more miraculously, those new things are accurate and open doors for even further thought and study. The movie itself is as great as ever, its complicated examination of power and the American obsession with acquisitiveness perhaps even more profound now than in 1941 when Welles made it.

The Emperor Waltz and The Fortune Cookie (Kino Lorber) Two classic Billy Wilder films get superb hi-def presentations from Kino, starting with The Emperor Waltz, a 1948 romance set in pre-World War I Austria that implicitly comments on post-World War II Germany. In a typical example of Wilder’s audacity, it’s essentially a Bing Crosby musical about the Holocaust, lush and colorful on the surface but oddly chilling thanks to its grim undercurrents. The Fortune Cookie (1966) is both funnier and darker (its unconvincing finale aside), a mordant comedy in which Jack Lemmon and Walter Matthau embark on a dubious insurance scam that gives credence to Joan Didion’s characterization of Wilder as the American cinema’s great “recorder of human venality.” Both discs contain outstanding commentary tracks by film historian Joseph McBride, who provides a wealth of production history and provocative thematic explorations. The Blu-ray releases coincide with the release of McBride’s new critical biography, Billy Wilder: Dancing on the Edge, which is to Billy Wilder what McBride’s earlier books on Steven Spielberg, Ernst Lubitsch, and John Ford were to those directors – in other words, it’s the most rigorously researched and analytically astute volume on Wilder to date. Although this is an article about Blu-rays, I had to slip in an endorsement for Dancing on the Edge since it’s easily the most insightful, lively, and thought-provoking book on film I’ve come across this year; no one is better than McBride when it comes to exploring and clarifying the complex intersection between cultural, historical, and psychological forces that yields an artist’s work, and his volume on Wilder is as good as anything he’s ever written – which means it’s as good as anything any film critic has ever written.

Get Crazy (Kino Lorber) I would be tempted to call Allan Arkush’s high-spirited 1983 comedy the greatest rock movie ever made if it weren’t for the fact that the director had already made another one just as good (Rock ‘n’ Roll High School) and would later make another that comes close (Shake, Rattle and Rock!). One claim I can confidently make for Get Crazy is that it’s as unabashedly exuberant as any film I’ve ever seen; if one adheres to Francois Truffaut’s dictum that any great movie must express either the joy of making cinema or the agony of making cinema, then Allan Arkush is one of the best directors in the history of the medium. Every scene in Get Crazy overflows with boisterous enthusiasm – for music, for filmmaking, and especially for actors; there isn’t an unexceptional performance in the entire ensemble cast, from Malcolm McDowell as the hedonistic headliner of a massive New Year’s Eve concert and Daniel Stern as the concert’s stage manager to Arkush regulars Mary Woronov, Dick Miller and Paul Bartel and musical icons like Lou Reed and Fear’s Lee Ving. As a personal remembrance of the music business where Arkush got his start Get Crazy makes a nice companion piece to Almost Famous, but if Cameron Crowe is rock and roll’s Truffaut, Arkush is its Frank Tashlin, a master satirist and pop artist who crams his frames with enough inventive and outrageous visual gags for ten normal comedies. The Blu-ray contains an expertly assembled behind-the-scenes documentary and an affectionate commentary track in which filmmakers and Arkush superfans Daniel Kremer and Eli Roth interrogate Arkush.

The Harry Palmer Collection (Imprint) After his success launching the James Bond franchise with Dr. No and From Russia with Love in the early 60s, producer Harry Saltzman decided to take another run at the spy genre by adapting Len Deighton’s secret agent novel The Ipcress File. The 1965 film starring Michael Caine as British operative Harry Palmer was both a commercial and artistic success, with director Sidney J. Furie’s offbeat compositions landing him a BAFTA award and the undying admiration of cinematographer Vittorio Storaro, who cribbed from The Ipcress File while shooting The Conformist for Bernardo Bertolucci. It was the first of three Palmer films by three different directors (Bond alumnus Guy Hamilton helmed Funeral in Berlin, while Billion Dollar Brain was signed by iconoclast Ken Russell) made for three different studios; all of them are smart, stylish thrillers unified by Caine’s nuanced performance as a kind of anti-Bond – cerebral and sensitive instead of macho and violent. Given the legal issues one would have thought a boxed set unlikely, but somehow Imprint wrangled the rights to all three Palmer movies and has released an exceptional collection loaded with commentaries, contemporary interviews, and vintage documentaries. It’s a great crash course in a franchise that ought to be better known and remembered.

Prince of the City (Warner Archive) Sidney Lumet’s structurally complex and visually meticulous tale of devastating betrayal gets a first-rate Blu-ray transfer from Warner Archive, with an enlightening making-of documentary as part of the package. Based on a true story, Prince of the City follows Danny Ciello (Treat Williams), a morally compromised narcotics detective who decides to cooperate with an investigation into police corruption. He finds that it is impossible for him or his beloved partners to remain untouched by the scandal; Ciello’s life is endangered because of the problems he causes the New York mob, and his own indiscretions and those of his friends threaten to send them all to jail. Lumet and co-screenwriter Jay Presson Allen chart the complex moral terrain with clarity and depth; things and people are never as they seem, and Lumet and cinematographer Andrzej Bartkowiak emphasize this idea by using short or long lenses that subtly alter perspective. (Lumet claims they avoided midrange focal lengths altogether.) Bartkowiak also steadily increases characters’ isolation via lighting: at the beginning of the film the backgrounds are brightly lit and the compositions favor the characters’ surroundings, but by the end of the movie Ciello and his associates are seen in darker, more tightly framed shots that convey every punishing betrayal. Even in scenes where Ciello doesn’t yet know he’s in trouble, Bartkowiak hints at the real meaning of his actions by imprisoning him with shadows, and the decision to shoot most of the exteriors at angles that eliminate the sky adds to the sense of oppression as Ciello makes one tortuous ethical choice after another. It’s a master class in visual storytelling, stunningly preserved on this Blu-ray.

Rancho Deluxe (Fun City Editions) I’m a fan of pretty much anything directed by Frank Perry (The Swimmer, Diary of a Mad Housewife, Play It as It Lays), but I have a particular soft spot for this loose and funny 1975 buddy movie, a contemporary Western in which Perry surrounds laid back outlaws Jeff Bridges and Sam Waterston with a delightful array of memorable character actors. The episodic hangout flick is populated by one colorful supporting player after another, from Harry Dean Stanton and Joe Spinell to Patti D’Arbanville and Slim Pickens, and they’re all charming as can be under Perry’s relaxed direction. In its naturalism and antiestablishment ethos it’s a 70s movie all the way, but it’s distinctive even for its time; whereas most other Westerns of the era had an elegiac or tragic tone, Rancho Deluxe is sunny and optimistic, the characters bathed in a warm glow by William Fraker’s lyrical cinematography as they bounce along to Jimmy Buffett’s sprightly score. The movie is pure pleasure from beginning to end, and Fun City’s Blu-ray provides ample additional gifts, including an engaging interview with Bridges and a first-rate commentary by one of the best in the business, critic Nick Pinkerton.