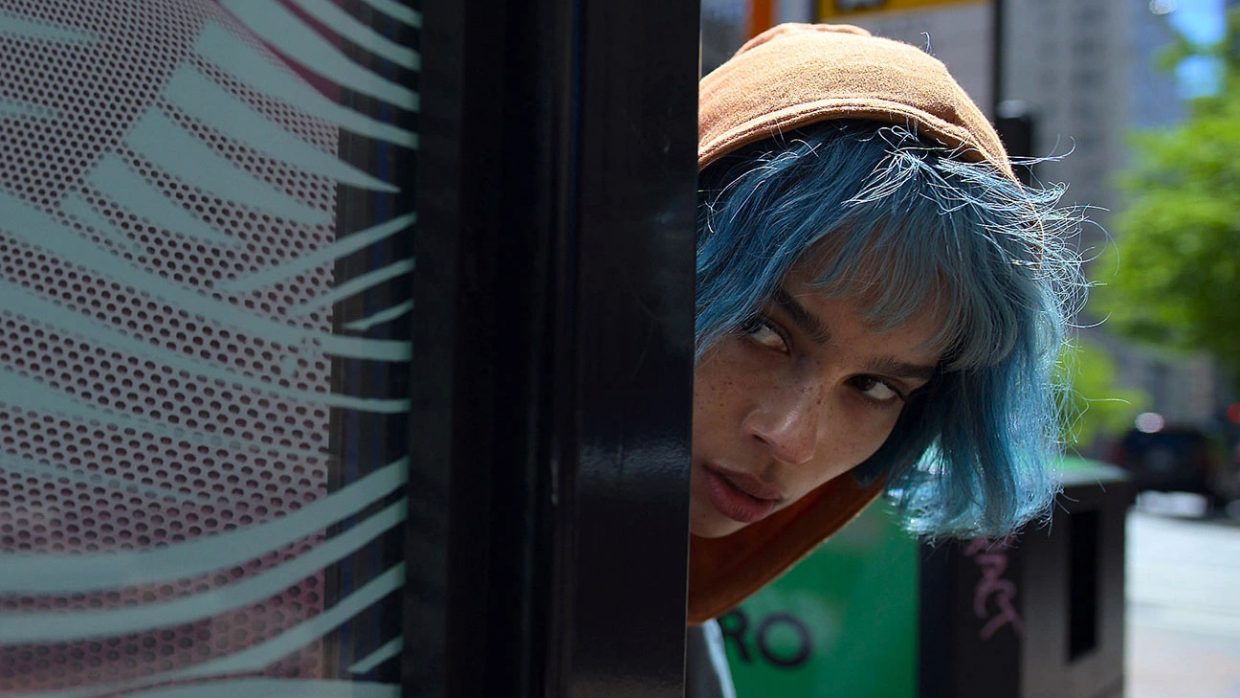 Want 87 minutes of something bright and beautiful with a cool kind of “hotness?” Try Kimi, a minimalist thriller in which Steven Soderbergh’s camera and an electric-blue-haired Zoe Kravitz move in sync like two rare birds in flight.

Kravitz plays Angela Childs, a data stream analyst for a company behind “KIMI”, a more responsive version of the ALEXA smart audio device, that’s about to go public.  The movie opens with a sleazy-looking guy doing a Zoom presser from his kitchen (COVID remote rules, a sketchy company or both?) explaining that KIMI is better than other devices because its communication skills are constantly updated. One might think twice about how that could happen, unless your desire for a gadget — which, for example, doesn’t start up “Solitude” when you’ve told it to play “Sabotage” — outweighs your nervousness that every breath you take is being recorded and sold to the highest bidder, something that your smart phone is probably already doing. I might be even more worried about buying a product from a company named Amygdala, and if I were Angela, whose amygdala is in overdrive, afflicting her with agoraphobia, I might wonder if something more than serendipity got me this job, which can be done without ever leaving the confines of a large, industrial-designed, sunlit, personal space. Back story is handled in about three terse sentences: Angela renovated the space with her father, who seems to have left it to her when he died, his death being one of three causes of her fear of venturing past her front door – the pandemic being the most obvious — and also the explanation of how a woman who monitors data streams could afford such digs. Agoraphobia notwithstanding, Angela is physically and mentally more than competent at using the tools of her trade, and also the tools which transformed a space that might once have been a factory into an enviable piece of real estate, thus allowing screenwriter David Koepp to follow Chekov’s rule that a weapon mentioned in act one must be activated in act three.

Deftly written and directed, Kimi is joyously built around Kravitz’s tour de force performance, which is idiosyncratic without ever being mannered. Except for the prologue described above she is never off the screen, and until the action-packed third act, she is often alone. This is the first movie in which Soderbergh revels in color (Kimi’s fuchsia light, Angela’s blue hair, her puce sweater and burnt orange hoodie) – not primary colors as in Godard, but just as vibrant. The first time we see Kimi, she’s puttering around her loft, and Soderbergh’s camera swoops around her as Cliff Martinez’s  full orchestral score suggests that there’s more going on than meets the eye, bringing a hint of Hitchcock’s Vertigo to the quotidian activities of coffee making and opening screens. A hint, that’s all, as there will be hints of Rear Window, Blow Out, The Conversation and Three Days of the Condor — just enough to remind us that the thriller genre has a pleasurable, twisty history, and also that something different is happening here because the protagonist is a woman. From the tall windows next to her desk, Angela sees two guys with eyes on her. One (Devin Ratray) might be a peeping tom; the other (Byron Bowers) is clearly a friend. Angela gestures that she’ll meet him on the street below and then rushes around scooping up her phone, keys, mask, prescription drugs and stuffing them into her purse. She gets as far as touching the lock on the front door before collapsing on the floor. The camera hovers above, like an adult bird, helplessly watching a fledgling that’s fallen from the nest. On the street, the BF shrugs and leaves for work. Later, he comes by, they have a fast fuck, and although Angela starts to strip the bed and throw the sheets in the wash even before he has time to sit up (remember when you wiped everything that came from the outside with bleach?), there’s just enough going on between them to suggest that there is hope for this relationship .

Most of Angela’s relationships, however, take place on screens  — mother, girlfriend, shrink, a co-worker in Romania, who greets her with an enthusiastic “Hey, Hotness.” (He’s played by Alex Dobrenko, and he’s a real find.) Catching up with work, Angela listens to streams from the day before and hears what sounds to her — and to us – like a woman screaming as she is murdered. When her bosses refuse to take this seriously, telling her to erase the tape and forget about it, she’s forced to leave her house to confront them directly, and then to flee from them through downtown Seattle, where crowds of Black Lives Matter protesters become her temporary shield, until she arrives back home, which is now anything but a safe space. This extended chase sequence seems both precisely mapped and made up on the spot, and not only this sequence, but the entire movie. A year or so from now, I’ll watch Kimi again and remember not just the panic of the pandemic, but the pleasure of movies that dazzle the mind’s eye and ear, particularly this one.