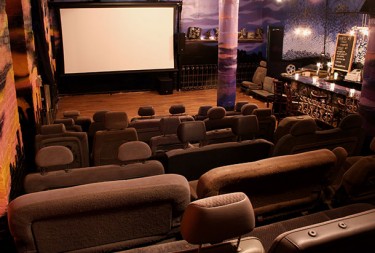 Any new New York independent movie theater, one showing not mini-major studio moveovers but recently premiered festival films that don’t have formal distribution, is cause for celebration. But we at Filmmaker are hailing the new reRun for one other reason: it’s in our building. That’s right, after a long day solving the crises of the current indie scene, we can head downstairs and enjoy not only movies but pretzels filled with garlic mashed potatoes, popcorn with duck fat, and microbrews. That’s right, you can eat and drink inside this theater, which is down the hall from reBar. (Menu preview courtesy of Gothamist.). Aaron Hillis, of the Village Voice and GreenCine, is doing the programming, and he’s launching with Frank V. Ross’s Audrey the Train Wreck, produced by Adam Donaghey and Mike Ryan, whose “Straight Talk” on the current state of things kicked up a lot of discussion in last issue’s Filmmaker.

Here, Hillis talks to the New York Times about his programming plans:

“I hope to be able to be an indie-film hero, to be able to give week runs to films that have no distribution or poor distribution,” Mr. Hillis said. For young filmmakers in the increasingly competitive indie market — in which a proliferation of films and a dearth of gung-ho buyers have made distribution harder to achieve — reRun offers some hope.

The New Year, the debut feature of Brett Haley, 26, will play later this month. “For a film like mine to get a week run in New York is crazy,” he said. “I get reviews I’d never get, I get exposure I’d never get.”

Mr. Haley said that his film, a slice-of-life character tale made for $8,000, had been well received at festivals — it won the audience award at the Sarasota Film Festival this year — but had had no bites from distributors. “You’re told your movie’s great, but it’s not marketable,” he said. Having a New York screening, he added, helps prove the doubters wrong.

Frank Ross will be attending the Friday screening. Please check it out and support this new, much-needed space for independent film.