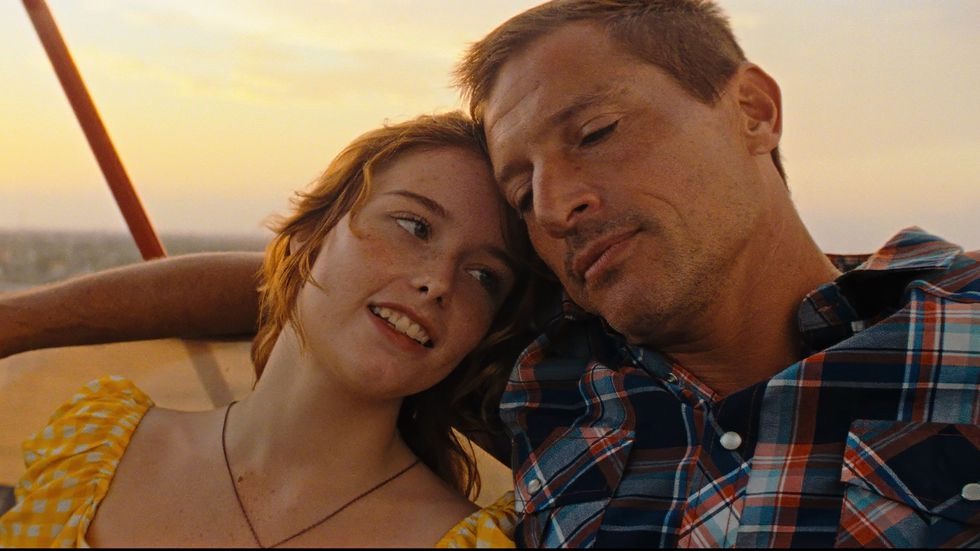 My first recommendations this week are two Blu-rays that are worth picking up not just because they’re terrific movies, but because they come with superb audio commentaries packed with useful information. They’re both comedies, though the first, Sean Baker’s Red Rocket, leaves a bit of a rough aftertaste thanks to the sly way in which Simon Rex’s revelatory performance sneaks up on the viewer. His recent Independent Spirit Award win was well-deserved, as I can’t think of many actors who could have so skillfully walked the line between playfulness and predation; as fading porn star Mikey, Rex beautifully projects an a weirdly childlike charm that draws in the people around him as well as the viewer. Baker expertly calibrates and manipulates our level of involvement and identification so that by the time we know the depths of Mikey’s dark side it’s too late – we’ve already invested in him even though he was clearly bad news from the beginning, and the film’s final act is hilarious, harrowing, and challenging in ways unlike any other American film of 2021. Rex’s Mikey is an antihero to stand alongside Travis Bickle and William Munny in his moral complexities and contradictions, and the community Baker surrounds him with – comprised of both excellent actors like Suzanna Son and Bree Elrod and non-professionals from the Texas area where the film was shot – is engaging enough to make the movie’s 130-minute running time feel entirely justified. The new Blu-ray from Lionsgate comes with two commentary tracks: one by Baker, Rex, and cinematographer Drew Daniels that digs into the details of the production and Baker’s methods; the other by film critic Kat Ellinger, who explicates Baker’s themes and explores Red Rocket’s place in his oeuvre. It’s nice to have the two perspectives on a new release disc, since ordinarily analytical tracks like Ellinger’s are only found on catalog titles.

Speaking of which, Imprint’s new special edition of The Bad News Bears in Breaking Training also contains both a filmmaker commentary and a historical track, and it’s just as rewarding a viewing experience as the Baker disc. A 1977 sequel to Michael Ritchie’s 1976 sports comedy The Bad News Bears, Breaking Training was fast-tracked into production to capitalize on the original film’s success; yet it doesn’t feel like a rush job thanks to the care and control of director Michael Pressman, behind the camera of a studio picture for the first time after his success working for Roger Corman on The Great Texas Dynamite Chase. As he makes clear on his commentary track (moderated by filmmaker and Pressman enthusiast Gillian Wallace Horvat), Pressman was thrilled to be at the helm of a major studio movie, and, to use an appropriate baseball metaphor, he was swinging for the fences – his exuberance and commitment can be felt in every scene of this affectionate, funny film. His fondness for the experience is clear throughout the audio commentary, which beautifully details what he was up against trying to do great work under less than ideal conditions, making a sequel without the original film’s stars on a ridiculously tight timeline. Pressman’s next movie, Boulevard Nights, was a stone cold masterpiece that got him into the National Film Registry, and it’s fascinating to see his talent developing in Breaking Training; it’s also fun to consider it as an early work by screenwriter Paul Brickman, who would follow it up by writing and directing the classic teen satire Risky Business. The Imprint disc includes a second audio commentary by film historian Scott Harrison, who capably supplements Pressman’s memories with insights into the director’s career and the sequel’s relationship to its source material. It’s a stellar release from one of the best companies in the physical media business.

My final recommendation this week is Arrow’s supplement-laden boxed set Lies and Deceit: Five Films by Claude Chabrol. In spite of the fact that he stood alongside Jean-Luc Godard as one of the most prolific members of the French New Wave, Chabrol is still typically categorized as the French Hitchcock – not an entirely inaccurate description, but one that doesn’t come close to encompassing the breadth of his subjects and interests. (It also ignores the fact that Chabrol, a far cooler and more detached director than Hitchcock, owed as much or more to Fritz Lang.) Arrow’s boxed set, consisting of five films from the middle period of Chabrol’s career (1985-1994), is a great sampling of the filmmaker’s work that shows his dexterity as a master of detective tales (Cop au Vin and Inspector Lavardin), literary period pieces (Madame Bovary), psychological character studies (Betty), and brutal examinations of the dark side of marriage (L’enfer). What all the films have in common is a rigorous and precise form of visual expression; Chabrol’s characterizations are often ambiguous or ambivalent in their morality, but the presentation is crisp, clear, and intentional. Taken together the films provide a crash course in how to delicately balance subjective and objective points of view to yield rich emotional and intellectual effects; Chabrol always knows when to keep the audience at a remove and when to draw us in, providing many of the conventional satisfactions of classical thrillers while still leaving enough room for interpretation to reward repeat viewings. (His approach to his antiheroes makes this box an interesting companion piece to Red Rocket.) Lies and Deceit is stuffed with vintage Chabrol interviews, new commentaries and interviews with film historians, and select scene commentaries by Chabrol himself; it’s a great film history class in a box, providing a comprehensive overview of one of the most important filmmakers of his generation.