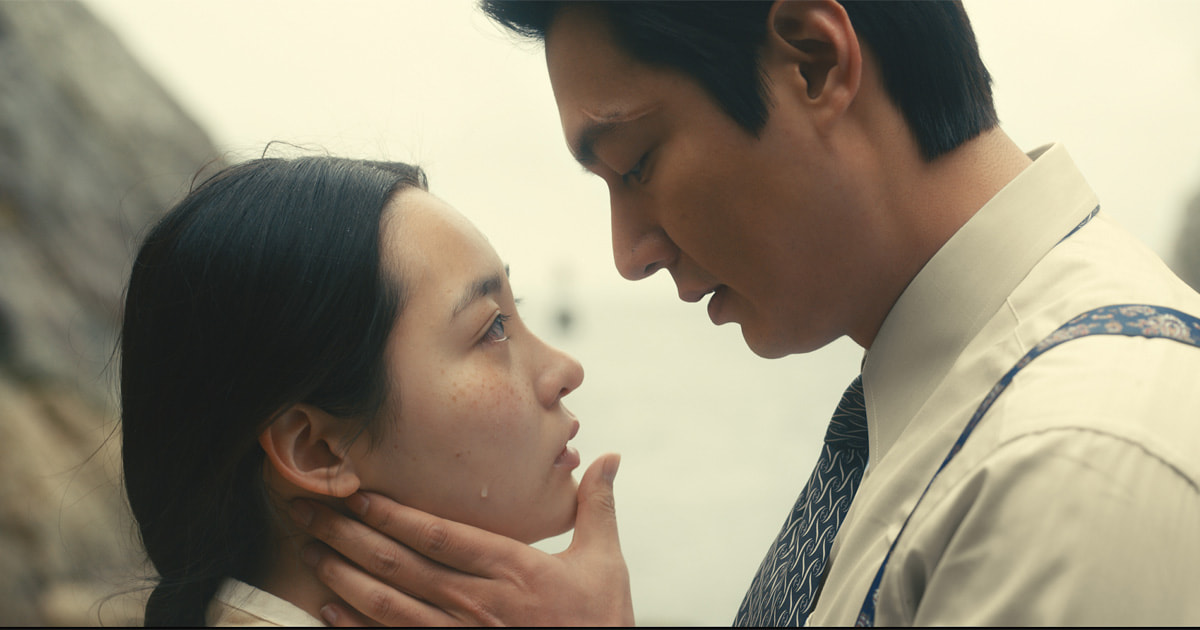 In Pachinko, a Korean family struggles for a place in a hostile world. Born into poverty on occupied land, Sunja (played at different ages by Minha Kim and Yuh-Jung Youn) emigrates from Busan to Osaka just before World War II. Trying to keep her family together, she faces relentless bigotry, as well as the pressure to succumb to a criminal gang led by Hansu (Lee Minho).

Stretching over several decades, with scenes set in Korea, Japan, and the United States, Pachinko was a gigantic production sidelined for a time by COVID. Based on the bestselling novel by Min Jin Lee, the eight-part series was created and co-written for Apple TV+ by executive producer Soo Hugh (The Terror).

Soo decided to split directing duties between Kogonada (After Yang) and Justin Chon (Blue Bayou). “People have asked me, ‘Why two directors?’ But when you look at the body of work that K and Justin have done, the answer is, ‘Why not?'” Soo said during a Zoom interview. “They’re both so different from one another. I think what each of their styles brings to the show is really exciting.”

Filmmaker: Can you talk about what this project means to the Korean community?

Justin Chon: The source material, the novel, was such an iconic work for our community. How the team expanded on the novel, the sheer quality of the scripts, it would be foolish not to fight to be a part of this. What’s exhilarating about the show is the historical elements that are woven in. I’m constantly examining our experiences in this country, and this was a different way to explore that.

Kogonada: I’m working on my own sense of where I fit in the spectrum of being Asian. Sometimes feeling not Asian enough, feeling too Asian at times. It’s an ongoing conversation with myself where the only constant is that feeling of displacement and dislocation. Trying to find that in this larger story of a family moving from their homeland, reestablishing themselves, yet trying to figure out who they are and where they really come from is something that I can relate to on a deep level.

Filmmaker: How did you work, simultaneously on different units? Did you prep together?

Chon: Simultaneously. We had some discussions. If you saw After Yang and Blue Bayou, we are definitely different filmmakers, but the way this show was designed allows for both of us to coexist in the same universe.

Kogonada: I think when Justin takes over the series, it’s just at the right moment. The series begins to explode into different directions.

It’s not as if our unit shot everything first and then the next unit came in. We were literally shooting it like one epic film. The actors had to be pretty nimble, they had to work with me and then Justin.

Filmmaker: Justin, you worked here with Ante Cheng, one of the cinematographers you used on Blue Bayou. In that film and in this series, the skin tones you achieve are remarkable.

Chon: Asian faces, you have to photograph them differently. You need to light from angles to give the faces more depth. I like to create a bit more contrast to add character. Also, I tend to film more from a three-quarter angle than straight on for Asian faces.

If you’ve seen Kogo’s work, I wish I could be as composed and thoughtful about the frame as he is. I wish I was a little more settled in that way. The way he photographs his actors is incredible.

Filmmaker: Let’s talk about communicating with the actors, because you’re working in three languages, Korean, English, and Japanese. How do you modulate performances?

Chon: The human language. That was the most surprising thing, you think it’s harder than it is, but it’s a lot more seamless than I expected.

Kogonada: I’m not like a micromanager of actors in my films. You hope you get actors who can embody a part, who have a good take on it. The adjustments are minor.

There’s a cinematic language, we’ve seen their works in their language. When you’re dealing with someone like Y-J, who’s a legend in Korea, there’s not much you have to say to her. She speaks perfect English anyway.

Filmmaker: There’s a scene in episode 3 where Yuh-Jung Youn’s character Sunja is having lunch with her grandson Solomon [Jin Ha] and a landowner he’s trying convince to sell her home. It ends on a close-up of Youn delivering a heartbreaking monologue about her past. Can you talk about getting to that point?

Kogonada: When you’re working with this level of acting, when you have someone so seasoned, for me it’s like a late-stage jazz player who no longer needs to show off. You know, it’s not like the young Miles Davis, it’s the older one who just hits one pure note that does the work.

I felt that whenever I filmed a scene with Y-J, and we got to do earthquakes and all, when we got her to sit down and play these sort of quiet notes, it would just blow me away. I was mesmerized.

We shot that scene on a stage, we set the cameras, we knew that her face, her notes, would be the scene. We just wanted to get the best possible composition and lighting to get to that moment when the camera pushes in ever so slightly.

It was also dependent on the relationship Y-J had with Jin, she really took a role in his life outside the set. You could feel that dynamic. I’m sorry, I wish there was some Kubrickian moment where I had to do it like 80 times. But, really, once we found the way to cover it, it was really just letting them do it.

Filmmaker: But you had to break the scene down first to know when to get to the close-up.

Kogonada: We knew we were going to have two wide shots. I love wides and that space allowed for them. What you do is talk to the actors. When someone like Y-J knows she has to go through certain emotions, you discuss if she wants to go through the scene first on a wide shot. To hit that real emotional moment — again, you’re talking to someone seasoned, who can articulate what she needs. Y-J was ready early on, she didn’t need too much warm up.

We had a single camera on her which we started wide, and then pushed in on her as she started her monologue. We did another take where we didn’t push in, just to have an option not to stay on the shot. She was very honest — she said, “I don’t know if I’ll be able to literally cry or break,” but she knew she could get there emotionally. She was worried that I wouldn’t do it unless she cried, but for me it was about the note.

Filmmaker: Justin, in the fourth episode you show the younger Sunja (Minha Kim) leaving Korea, looking at her home for the last time. It’s a very moving montage, a combination of tracking shots and isolated close-ups. Were those subjective shots in the script, or something you came up with?

Chon: It’s something we came up with. The setup was really what Kogonada did in the first three episodes, spending so much time in that space. I felt we had to find some sentimentality in that space. That scene in particular, the goodbye, we designed it the way I like to work a lot. I’m always trying to get to the meat of the scene first, when the actors are fresh. So I did a moving master, basically like a play, and we rehearsed it very sparsely, just one or two times.

I block where the actors are going to be, and then we move through the space, follow it like you would a play, and try to capture everybody in their moments. Then we go back to get the required elements so we can edit. But it’s never going to be as fresh as that first time, so I’m always trying to find a way to get that first moment of them all interacting.

Filmmaker: How involved were you with the editing?

Chon: I think it’s pretty evident the way we shoot will indicate how scenes should be edited. We had time with the editors, we had notes.

Kogonada: The biggest difference for us is that as independent filmmakers, we know when we’re shooting a scene exactly how we’re going to cut it. In my case, I do my own editing. This is the first time I’ve handed it over, which was a new experience. I can see real possibilities with that in the future.

Filmmaker: This is a much bigger production than either of you have worked on before. Can you talk about the pressures you faced?

Chon: Storytelling is storytelling. I think you adjust. There’s a few more people, which is actually pretty awesome because you have access to resources that you don’t on an independent film.

Kogonada: My first film was almost as big. Just kidding. I’ve heard people say this and I think it’s true, at the end of the day you always feel that you don’t have enough time. There’s always that daily “trying to get everything you want,” which is true even on the smallest film. There are more voices, it takes a little longer to steer the ship, but that’s part of growing as a director.

Kogonada: The funny thing about our medium, both in film and TV, is that it’s a timed event. It’s not like painting, where you can go into a room and adjust. It’s this incredible art form where you have a day and a clock starts ticking and you have to do your work within a certain amount of time. You try to create, but every day you’re trying to finish a certain amount of scenes.

With this project there were a lot of beautiful words, speeches, that we had to cover, and more options on top of that about how you’re covering them.

Filmmaker: How did COVID affect your work?

Chon: This was during the onset of COVID, people were trying to figure stuff out. A lot of testing, mask, protection, standard procedure now.

Kogonada: I think we were one of the first big productions to deal with the protocols. They added money, resources, and time. Both of us thought originally it was going to be a four-month project, but it ended up being eight.