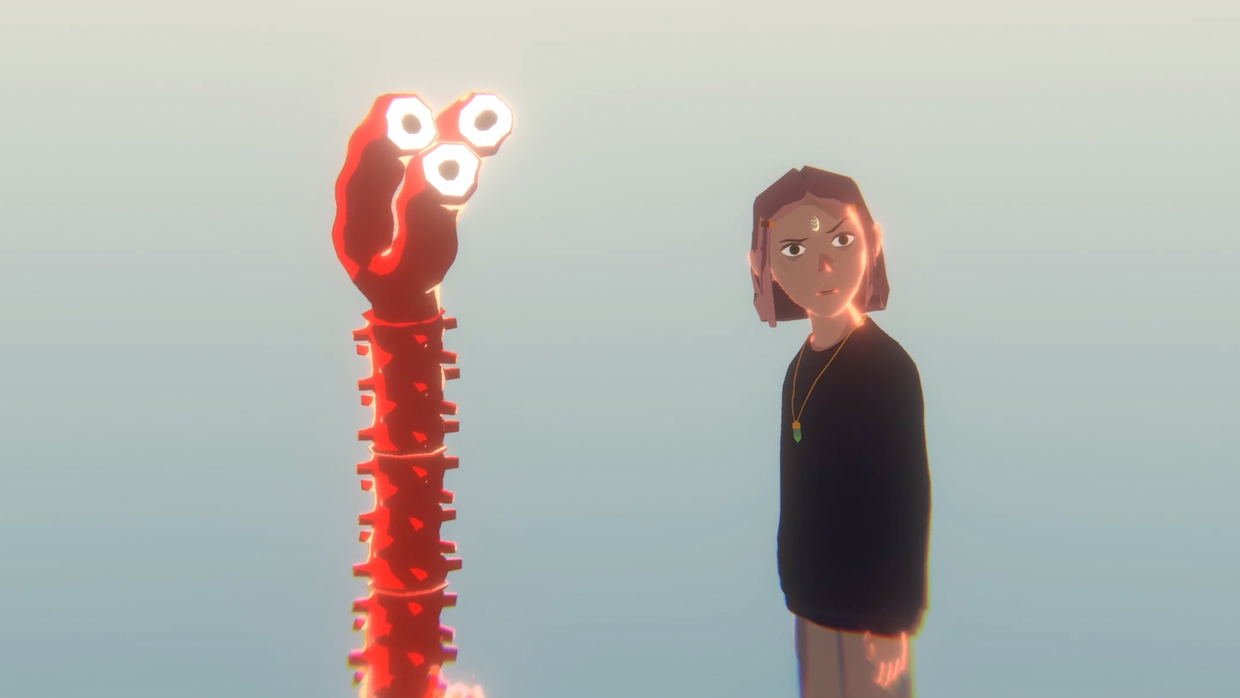 Columbia’s Digital Storytelling Lab announced its “Digital Dozen” earlier this week—its annual list of the most innovative examples of digitally enabled storytelling. Unlike other awards programs, this one has no categories, so what you saw was a typically eclectic mix of XR, immersive theater and interactive installations, this time with some NFTs thrown in as well. But the Breakthroughs in Storytelling Awards, as they’re officially known, always come with a few surprises, and this year was no exception.

The DSL’s top honor, the 2022 Breakthrough Award, went to “Life After BOB: The Chalice Study,” a narrative animation by the New York-based artist Ian Cheng that was first shown last June at Luma Arles, a new art park in the south of France. Rather than a conventional film or video, “Life After BOB” is built on the Unity game engine, which means it’s generated anew each time it’s shown. This also means viewers can interact with it, exploring the world Cheng created by clicking on objects with their smart phones.

BOB is an AI, its name an acronym for Bag of Beliefs. “The Chalice Study”—the first of several planned episodes—is the story of a ten-year-old girl named Chalice whose father, a mad inventor named Dr. Wong, implanted a BOB in her nervous system shortly after she was born. Cheng, who studied art at Berkeley and Columbia and cognitive science at Berkeley, had earlier created a series of BOBs—constantly mutating, quasi-sentient red blobs that were exhibited behind glass at art galleries in London and and New York. In presenting him with the DSL’s Breakthrough Award, Aramique Krauthamer, a noted installation artist himself, observed that Cheng’s work “benefits from being told by someone who is not just an artist, not just a storyteller, but who has a background in cognitive science and has actually created AIs.”

An undercurrent of anxiety about the future was present in many of the works cited by the DSL, including not just “Life After BOB” but also the Special Jury Prize winner, a series of artifically generated humans called “Dates” that are currently for sale as NFTs on the OpenSea platform. Created by Ben Ditto, a journalist and creative director who lives in London, the work uses AI and crypto to create a barbed commentary on sex work and the metaverse in a future in which the line between data and biology has been erased.

The theme of anxiety was particularly present in another work cited by the DSL, a one-on-one online theater experience called “TM” from the noted Belgian troupe Ontroerend Goed. While meeting with someone from the “TM movement,” participants are hit with a barrage of questions and assignments that aim to determine whether they could become a member of this organization. The experience brings to mind the current spate of bizarre conspiracy theories such as QAnon, which holds that Donald Trump is fighting to save America from a cabal of devil-worshipping Democrats and other elites who feast on the blood of children.

The other members of the DSL’s 2022 Digital Dozen are:

“Forest of Us,” by Es Devlin: A maze of mirrors draws parallels between the bronchial trees of humans and the trees that exchange carbon dioxide for oxygen in the world around us.

“Neurocracy,” by Joannes Truyens: A hypertext novel that uses articles in an online encyclopedia to tell a story of intrigue and assassination amid a near-future pandemic.

“Raining Stories”: Created by V8 Architects and narrative experience designers Kossmanndejong, the Netherlands Pavilion for Expo 2020 Dubai (which took place in 2021 due to the coronavirus pandemic) was a circular climate system – a biotope—that housed a multisensory narrative experience which addressed such questions as, how can we make it rain in the desert?

“Breonna’s Garden, ” by Lady PheOnix and Sutu in collaboration with Ju’Niyah Palmer: An augmented reality experience to honor Breonna Taylor, the Black Louisville medical worker who in 2020 was shot and killed by police officers in a botched drug raid.

“The Changing Same,” by Michèle Stephenson, Joe Brewster and Yasmin Elayat: An immersive, room-scale virtual reality experience that takes you through time and space to witness historical experiences of racial injustice in the United States—ending in an Afro-futurist world that imagines an equitable future for all.

“Wallace & Gromit: The Big Fix Up,” from Aardman Animation and Fictioneers: Britain’s beloved claymation characters have been updated for the 21st century in a highly participatory AR adventure. Wallace and his hapless pooch have started a new business called Spick & Spanners; your job, as their employee, will be to help them fix up the city of Bristol. Good luck!

“Lizardly,” by Kat Mustatea and Heidi Boisvert: Vincent and Rebecca’s marriage is falling apart as they brace for an oncoming hurricane—and if that’s not bad enough, they are also turning into lizards. A live, mixed-reality play that explores the effects of AI, environmental collapse, and interspeciality.

“Obsidian,” by Jónsi: When Iceland’s Fagradalsfjall volcano suddenly erupted after lying dormant for nearly 800 years, Jónsi was unable to return from Los Angeles because of pandemic-related travel restrictions—so he conjured up its enormous force through a series of installations that combined sound, scent and sculpture.

“Otherly”: Created for Instagram Stories in a first-ever collaboration between POV Spark, the PBS showcase for nonfiction independent films, and the National Film Board of Canada, “Otherly” is a series of short documentaries about finding one’s place in the 21st century.

In an online presentation hosted by DSL founding director Lance Weiler and awards director Frank Rose and produced by Aaron Matys, this year’s Digital Dozen were presented by Paola Antonelli, senior curator of architecture and design and head of R&D at the Museum of Modern Art; Jake Sally, chief operating officer of Jadu; Ziv Schneider, winner of last year’s Special Jury Prize for “Sylvia”; and Krauthamer, executive creative director of Whatever. The awards themselves were were created by Weiler and Takaaki Okada and co-created by the audience in real-time before being minted as NFTs.