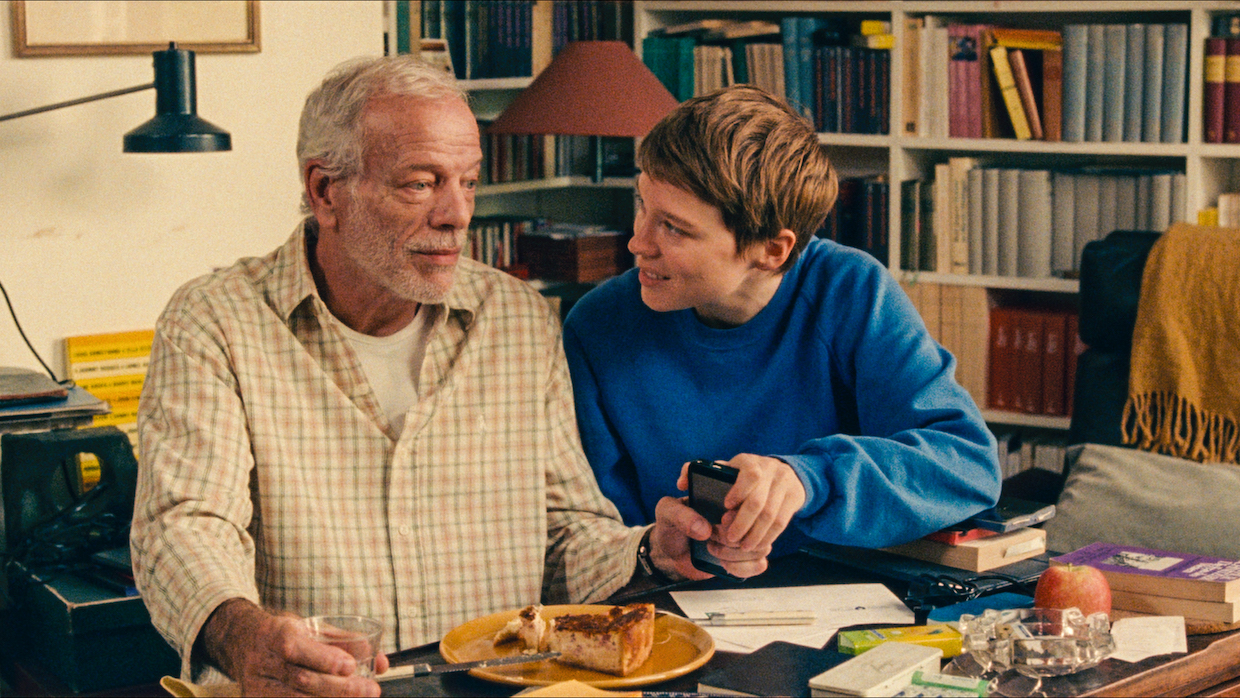 Pascal Greggory and Léa Seydoux in One Fine Morning

One Fine Morning, Mia Hansen-Løve’s eight feature, messily synthesizes familiar recurring autobiographical threads. The writer-directors’s parents were philosophers whose divorce was traced over in the excellent Things to Come. Isabelle Huppert stood in for her mother there; One Fine Morning takes the daughter’s perspective, with Hansen-Løve rendered as translator Sandra Kinsler (Léa Seydoux). With father Georg (Pascal Greggory) increasingly hollowed out by a rare neurodegenerative disease, Sandra and her mother, Georg’s ex-wife Françoise (Nicole Garcia), are forced to make a number of draining caretaking decisions. (In the press kit, Hansen-Løve says she was “partly inspired by my father’s illness while he was still alive.”) When the understandably stressed Sandra runs into an old friend she hasn’t seen in while, married cosmochemist Clément (Melvil Poupaud), an affair begins almost immediately and Morning’s only open question is whether or not he’ll actually leave his wife. Their on-/off-again relationship is very much Hello Second Love, and it’s impossible not to note that Poupaud is a dead ringer for Laurent Perreau, the father of Hansen-Løve’s second child (conceived during COVID). Sandra is equally skilled in translating German and English into French, in keeping with the writer-director’s often casually polylingual, border-hopping characters; more than most of her co-financed peers, Hansen-Løve is self-consciously as much an EU filmmaker as she is a French one—All is Forgiven, The Father of My Children and Goodbye, First Love moved between France and, respectively, Austria, Italy and Germany—so this choice of professional disguise (in a French-German co-production) crunches.

All Hansen-Løve’s films are empirically grounded—in either her life or those of family and friends she’s identified (Humbert Balsan in The Father of My Children, her brother’s DJ life in Eden, a war journalist friend of the family introduced in Things and whose story is continued in Maya)—but mediated veracity, of course, is no guarantee of quality; where her best works proceed from one tersely dramatized scene to another, this is a baggy catch-all of anxieties. The caretaking thread is reasonably devastating, the same way any film depicting dementia taking increasing effect might be. Here, that sadness is amplified for viewers familiar with Greggory—so bright and sparky for his Eric Rohmer parts, here paradoxically acting up a storm of increasing weakness as he fades into senescence. Less affecting is the affair between Sandra and Clément, which feels both sincere and chintzy: after they first sleep together, he rhetorically asks, “How could this body stay asleep for so long?” (Nobody’s their most quotably dignified in the initial throes of love and/or lust, but c’mon.)

As reliably good at weaving in nonprofessional actors as any hybrid documentarian, Hansen-Løve scores when focusing on Sandra’s work, which one afternoon takes her from translating a ceremony honoring American veterans of Omaha Beach to translating the finer points of calvados manufacturing at a distillery tour these clearly very real nonagenarians are taken to after, the kind of fascinatingly random trajectory no screenwriter would have logical occasion to conceive—it’s not metaphorical, just interesting. Other tangents, assembled almost at seeming random as a would-be tapestry of contemporary Paris, fall shorter of intriguing or border on embarrassing: a repeated thread about Françoise’s half-assed entry into the world of anti-Macron activism is a demonstration of exhausted liberalism, both in the character and the pointless punchline quality of her endeavors, which logically imply that futility is the only pragmatic stance. (Discussion for another day!)

Because I was lucky enough to be on vacation in Paris a month ago, much of One Fine Morning played differently to me than it would’ve before that: I now understand that these characters live in incredibly nice and expensive neighborhoods in the city center, whereas before everything would have just registered as “Paris” to me—there’s nothing wrong with being comfortable, per se, but I couldn’t help having some real estate envy. The moment that popped out at me most here is tiny, when the still freshly-giddy Sandra and Clément play a kind of hide-and-seek in the Tuilleries, giggling and running with the unselfconsciously obnoxious disruptiveness of teenagers. A man trying to enjoy his afternoon in the park shoots them an incredibly and understandably dirty look, which neither catches—his venom radiates an annoyance that’s both within the scene and outside the characters’ experience of it. I briefly thought he might’ve been captured on the fly by a hidden camera, but a cut to a different angle maintains continuity and seals the gag. It’s a small puncture that feels more sharply observed for not being thematically related to anything—NPCs live round here too.

Fictionalized reminiscence reaching much further back is also the base for James Gray’s Armageddon Time—his first digitally shot film and, as it happens, the first time I’ve liked one of them. The subject is, essentially, that Gray had a Black friend when he was in sixth grade who had a terrible home life and was awfully treated at school by uncomprehending teachers, and that Gray now feels really bad about not picking up on all this. Their friendship is the film’s central core, although it’s not clear whether the final act, where the two do something stupid and get in trouble, is a fictional addition or not. But the press kit is very clear that Armageddon Time is, at least up to its third act, an attempt at one-to-one reconstruction of Gray’s past—his family home rebuilt on a New Jersey soundstage, its interior particulars reconstructed from thousands of slide photographs. (Gray cites nothing less than In Search of Lost Time as a tonal reference point. As far as the switch to digital, a first for the vociferous 35mm advocate, in the press kit Gray claims that “Film doesn’t respond the same way as it did then, because the technology has advanced so much since 1980 and the stocks are so good. So we had to create a simulacrum. We shot with the Alexa 65, and then did a film-out, transferring it to film and then scanning it back digitally.”) On the heels of Richard Linklater’s Apollo 10 1/2, this is another act of almost heroically detailed memory with its own NASA-inflected particulars: here, one of the first things Gray stand-in Paul (Banks Repetta) and Black friend Johnny (Jaylin Webb) bond over are NASA patches for Saturn V. (Best production design detail: in a dream sequence where young Paul’s celebrated by his classmates, his teacher announces their appreciation of him while holding the Sony ECM-51, the skinny microphone Richard Dawson famously used on Match Game.)

It’s 1980, morning in what’s not quite yet Reagan’s America: he’s still a candidate heard on TV prophesying that America is approaching its own moral moment of Armageddon, which—along with the Clash’s cover of “Armagideon Time”—is the pretext for the title. Gray’s gloomy takes on Greek tragedy, from Little Odessa up through We Own the Night, could all have had this title, their narratives devoted to plunging characters into endless downfalls. Armageddon Time, though, unexpectedly begins in a place of non-foreboding warmth and reminiscence; its opening sequences unfold Paul’s family life as peak Jewish family comedy, his public school days as essentially innocuous teachers-vs-kids hijinks. Paul’s parents are working-class and supportive, but it’s his grandpa Aaron who serves as a rock of delight and reassurance—a peak part for late-period Anthony Hopkins, who at this point just radiates basic decency. Paul already wants to be an artist, even if he’s not entirely sure what that means: after a class trip to the Guggenheim, he replicates a Kandinsky painting. Plagiarism as a precondition for artistic training is a venerable tradition; plagiarism of abstract art for a renowned classicist like Gray is, I guess, at least an acknowledgement of awareness of more radical forms that he’s consciously rejected, the rough film equivalent of Wilco booking particularly abstruse opening acts.

Even without press kit context, Armageddon Time would have a very clear “I remember this, and this—and this!” vibe carved out of memory rather than a grab-bag of details shoved into a prefab five-act arc. In its macro conception, Armageddon Time is trickier: halfway through, Paul is transferred from public to private school, specifically Kew-Forest School, where the Trump family were heavily involved, leading to a couple of weird scenes where both Donald’s father Fred and his sister Maryanne make appearances. The implications are clear: looking back at his childhood, Gray can see the seeds of the rot of the American Empire extremely clearly. One response to this is, “well, couldn’t we all,” but while I might generally find it extremely regrettable if someone else did this, in Gray’s very specific case I’m inclined to allow it because the Trumps really were in the neighborhood. In any case, the film’s slightly embarrassing qualities—its unreconstructed nostalgia for the Sugar Hill Gang, its naive discovery of racism as well-embedded among wealthy white Americans—probably serve it better than something more plausibly deniable and retroactively enlightened.