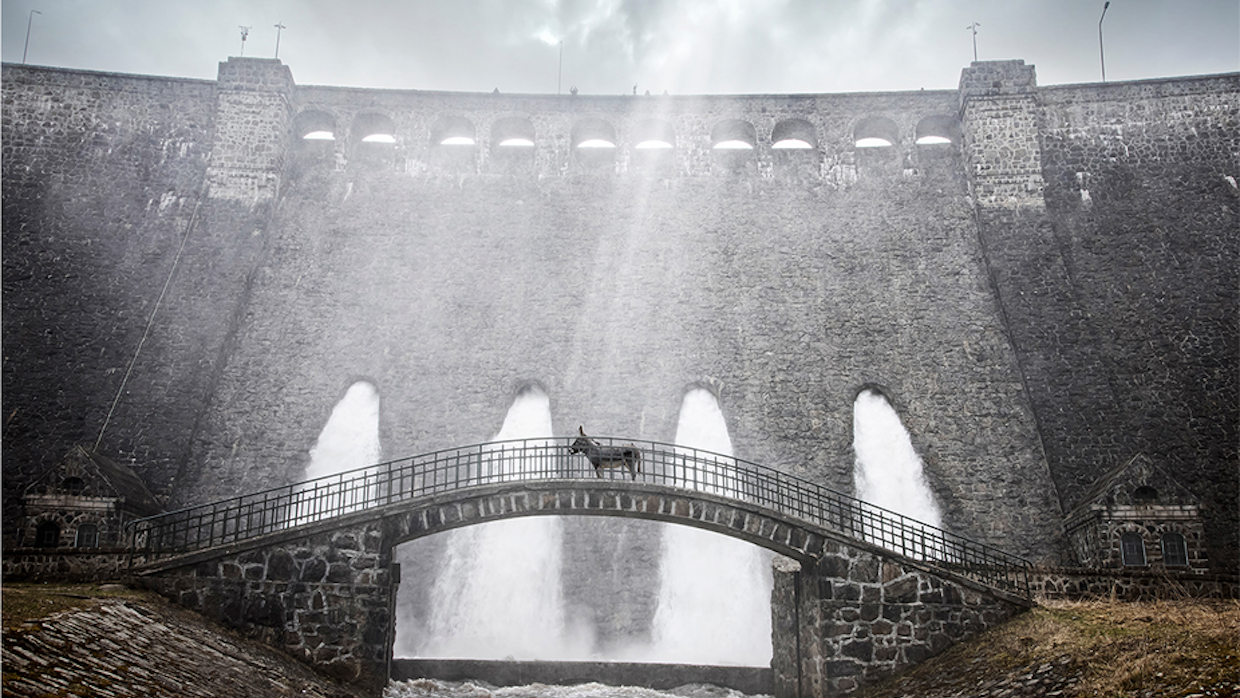 “What if this movie’s just a donkey green screened onto a bunch of Koyaanisqatsi-looking footage?” I joked to a friend as the lights dimmed for Polish master Jerzy Skolimowski’s new film, Eo. It wasn’t, but honestly I wasn’t as far off as I thought. Touted (in the media, at least) as a remake of Robert Bresson’s 1966 classic Au hasard Balthazar, the 84 year-old’s latest offers one of the more radical updates of that film imaginable. Pitched somewhere between sacrilege and tribute (Skolimowski is a notorious Bresson fan, even if his work has rarely shown his influence), Eo is an epic, expressive and capricious odyssey into the primitive viscera of Balthazar’s legacy.

A profoundly spiritual portrait of the titular donkey, Balthazar is also the text its maker most explicitly links to his early life as an action painter (“Then onto my canvas burst a multitude of structures, each with its own dialectic,” says a man with an easel strapped to his back). With Eo, Skolimowski aims for an even more volatile and irruptive classification. The film begins in a circus—filtered, as so many of the film’s subsequent images are, in a pyretic red—where Eo (performed by a sextet of asses: Hola, Tako, Marietta, Ettore, Rocco and Mela) is featured in what appears to be a vaudeville performance with a young woman named Kasandra (Sandra Drzymalska). Deeply saturated and shot in superimposed close-ups and overhead shots, the intro is unexpectedly overwhelming—not for the empathy it generates toward these images of an animal devoid of agency, but simply as cinema—and from there the movie rarely lets up.

As in Balthazar, Eo spends the film switching possessors, lucking his way out of some unpleasant situation only to wind up in another equally pitiable and abusive one. Like the vegan-friendly message Skolimowski ultimately emphasizes in the movie’s home stretch, the nature of each situation hardly matters; even Eo’s initial carer, Kasandra, is a non-factor, appearing maybe once after the opening sequence, thereby jettisoning any narrative anchor analogous to Marie (Anne Wiazemsky) in Bresson’s original. The transitions between episodes are the true draw here, and they’re mostly stunners. An overt homage to Eadweard Muybridge links the film to early cinema’s pre-lingual “attractions” mode, and dialogue is mostly kept to a minimum, with most speech limited to people calling Eo’s name—a name that isn’t even a name, but rather a donkey’s onomatopoeic cry for who-knows-what. (The film’s French title, “Hi-Han,” is perhaps a better expression of the animal’s characteristic hee-haw.) Thus, Eo is a creature devoid of singularity or subjectivity of any kind, standing in for a sound without meaning.

Eo’s engagement with speechless sounds and images is Brakhagian at heart: metaphors for senses, views of the world before words. Wide-angle, feathered-edge POV shots depict much of Eo’s journey, while drone shots over crimson forests deliver us to yet another elsewhere—zooming across trees before spinning in lockstep with the blades of a wind turbine, a moment so arresting (and, in the context of a Bresson remake, ridiculous) that I nearly burst into tears. Just as Bresson pleads to his tools on the last page of Notes on Cinematography (“Camera and tape recorder, carry me far away from intelligence, which complicates everything”), Skolimowski has delivered a film that feels like a process of unknowing—an anxious attempt to defamiliarize its audience from order, morality and capital. As a football fan bellows out while unchaining Eo near the movie’s midpoint: “Anarchy rules!”

Mark Jenkin’s Enys Men is the Cornish filmmaker’s sixth feature, and first since his semi-breakout, Bait (2019). I haven’t seen any of those, but knew going in that he was a material-driven director who tends to work in 16mm that he hand-processes. Set in 1973, Enys Men (Cornish for “Stone Island” and is pronounced—if I recall correctly—AYN-is Mayn) is an image-forward movie drenched in the kind of dense, thick film grain you can find in e.g. the work of Ben Rivers or Samuel M. Delgado & Helena Girón. Primary colors veritably bleed off the screen as we watch a woman (British TV actor Mary Woodvine, also in Bait) after she arrives to observe an unusual flower that’s appeared on the isle. Just as the image’s graininess never lets you forget that you’re looking at an image, conspicuous foley work verges on cartoonish, with isolated radio noise, footsteps and creaking doors amplified to the point where they become haptic. Zoom lenses and an infinite depth of field are likewise put to good use, destabilizing our sense of scale. (Woodvine tends to step right into the frame as though a giant, her boots way too large relative to other objects in the frame.)

The woman dons a red riding hood raincoat as she inspects the wiry, daisy-looking flora each day, logging her thoughts in a notebook (“No change,” again and again), and mysteriously, ritualistically dropping a single stone into a well. In her downtime, she reads Edward Goldsmith’s A Blueprint for Survival, an environmental text published a year before the film is set that argues, among other things, that reducing the size of a community is an ideal method for reducing environmental impact, especially of businesses. As “changes” begin to register in the form of lichen and a lost supply boat from 1897 becomes a prominent detail in the narrative, the film folds into a trance film psychodrama in the spirit of Maya Deren’s Meshes of the Afternoon (1943). Occult figures arrive on the scene, and we’re treated to J-horror freakouts and a nerve-shredding score that crescendos without warning or reason. (It was at this point that I was no longer completely baffled by NEON’s decision to pick the film up for distribution earlier this week.) Jenkin’s thesis regarding the environment and contamination reveals itself slowly, and ultimately remains secondary to the movie’s more material pleasures, allowing the experience to effectively get under the skin.