Cannes 2022: Triangle of Sadness, Magdala, The Natural History of Destruction 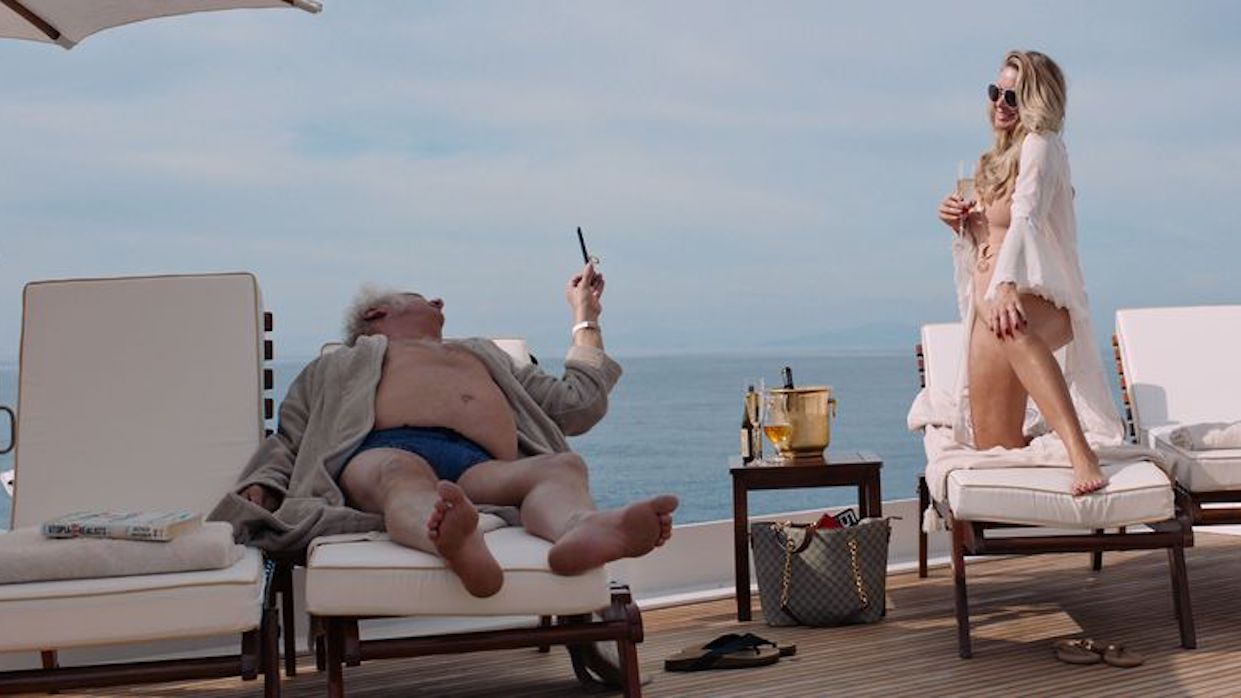 Triangle of Sadness stands as the conclusion of what Ruben Östlund has recently deemed a trilogy about “being male in our times.” (It will not be a quartet.) As with the middle entry of said triptych (his 2017 Palme d’Or-winner The Square), Triangle is a movie of set pieces blanketed by a shapeshifting social critique obsessed with the myriad ways in which civilization and morality distort human life. Its initial target is the modeling industry, a chapter (the first of three, Östlund’s new favorite number) dominated by cheap shots at the scene’s stereotypical superficiality and cattiness, especially its particular gender pay gap, which, as the film reminds us many times, privileges women over men. Influencer couple Carl (Harris Dickinson) and Yaya (Charlbi Dean) are the focal point here, and engage in an ongoing quarrel over the gender politics behind which of them ought to pay for dinner—the man, of course, except not, because he makes less money. Õstlund is fairly obviously so over woke culture, and “bullshit feminism” is outted as the root cause during a handsomely filmed backseat ride back to their hotel, a single take in a very cramped space and a desire to eschew shot reverse-shot. Mechanical whip-pans, it is!

The stabs at capitalism are broad and obvious in this first (and worst) act, but the spectacle of Õstlund’s go-for-broke style can (and, for me here, does) trump his tiresome penchant for both-sides-ism. The next (and longest) chapter, called “The Yacht,” feels especially relevant this week in Cannes. It commences with more cynicism, including more than a couple implied eyerolls directed at the crew’s collective mantra, “We are all equal.” Carl gets a crew member (Timoleon Gketsos) expelled from the boat for being shirtless in front of Yaya, and jokes are made at the expense of a disabled woman—a German stroke victim incapable of saying anything except the line, “In den wolken” (“In the clouds,” which of course, because everyone there is so out of touch). The only truly enjoyable activity on board is drinking, so the captain (Woody Harrelson) does so constantly, while a bored, inebriated, extremely wealthy Russian woman demands that every worker (cooks included) enjoy the resident waterslide instead of fulfilling their duties. As in the celebrated restaurant sequence in Jacques Tati’s Play Time (1967), the inability of workers to efficiently do their jobs crescendos into utter mayhem, and a storm-rattled Captain’s Dinner provides one of this festival edition’s genuine high notes. Without spoiling it, I’ll just say that one of my pet peeves about the lack of realism in cinematic puking—so often represented by a single mouthful of some standardized, yellow-ish custard—is a non-issue here. This, the film’s comedic climax, lands so close to the euphoric abjection found in the Jackass franchise’s best moments that it muted my mounting skepticism of the project’s simplistic political stakes, and served as a reminder that Õstlund can be quite a bit of fun when he isn’t bombarding his audience with mediocre satire.

I was introduced to the work of French filmmaker Damien Manivel when his lovely Le Parc screened in Cannes’s ACID sidebar in 2016, and checked in with him there again for Magdala. The 78-minute film is an imagined portrait of Mary Magdalene shortly after the death of Jesus, and is a throwback to aughts-era slow cinema rigor. The conservatively color-graded 16mm cinematography was transferred to digital sans matting (i.e. the edges are rounded and feathered, sprockets vaguely visible), as Manivel goes all in on the elemental minimalism of early Lisandro Alonso and Albert Serra (viz. La Libertad [2001] and Birdsong [2008], respectively). Until she cries to heavens, “My love, my love…”, the film envelops the viewer in a score of rustling leaves, snapping twigs and the occasional breeze as Magdalena methodically crawls, walks, pees and weeps her way through a forest, encouraging us to consider the pointedly profane materiality of her image, situation, and environment.

Moments of abstraction peak in, such as a cutaway to Jesus’s bloody, staked feet, or another to Magdalena literally ripping out her own heart, but these exceptions are metaphors for the trauma absorbing her imagination; this is, in every essential way, an image-forward movie. Manivel is well aware that the action onscreen is held together by popular familiarity with Christian narratives—the religion’s mythology and iconography does all of the heavy lifting—and flirts with the limits of content and context in Magdala’s construction. Like the first filmed Passion Plays that helped usher narrative logic into cinema during its early years (e.g. the Lumière brothers’ La Passion [1897]), Magdala pushes information to the margins, and asks if an image can simply be an image. When Magdalena idly uses her walking stick to etch a portrait that I quickly recognized to be Jesus into the ground, my own act of inserting information into an image that gave very little of it—completing it, imposing upon it, with memories of other images of Him I’ve encountered in the past—became palpable in ways I’ve rarely felt in movies, and that’s not nothing.

Sergei Loznitsa’s latest archival footage montage film, The Natural History of Destruction, arrives as a Special Screening. Born in Belarus before completing school in Kyiv, Ukraine, Loznitsa has received particularly more attention than usual this year after he was expelled from the Ukrainian Film Academy, who called him a cosmopolite after the filmmaker made comments criticizing the European Film Awards for banning Russian films in light of the ongoing Russo-Ukrainian War. The premiere of this new film, which he’s been working on since last year, feels aptly timed, though it stands well on its own even without the recently intensified relevance. Destruction is named after W.G. Sebald’s 1999 essay collection that criticizes German post-war literature for being largely silent about the Allies’ destruction of German cities during World War II. That thesis hangs over Loznitsa’s assemblage of this material for those who are aware of the connection (no quotes or citations here), but as a cinematic object it’s actually quite removed from the world of literature. Based on material sourced from collections at PROGRESS.film, Imperial War Museums and British Pathé (among others), Loznitsa’s film is structured in movements, beginning with footage of bucolic everyday life during peace time, through preparation for battle (including factory production of planes and artillery), and into and out of documentation of aerial bombings—first in a glistening nocturnal passage, later in the brutal clarity of day.

These bombing sequences, accompanied by percussive explosion foley, are as harrowing as they are sublime, instantly joining the ranks of the most unforgettable war imagery I’ve seen on screen. Among the self-critical thoughts I had regarding the way I instinctively registered these visions of mass death as beautiful, I likewise couldn’t shake the sense that I was watching some of the greatest war-adjacent outsider art ever produced—stunningly plastic images that were created, no doubt, without even the vaguest artistic pretense. To his credit, Loznitsa knows how to let images speak for themselves, at least until he doesn’t. Music is used sparingly (and, for the most part, unobtrusively), but sad violins are unwisely draped over the Natural History’s final passage of flyover shots of destroyed German cities, and run counter to the faith I’d always assumed the filmmaker had in an document’s ability to dictate its own emotional notes. Grouping the material into thematically alike segments and adding foley is one thing, but this was entirely another.