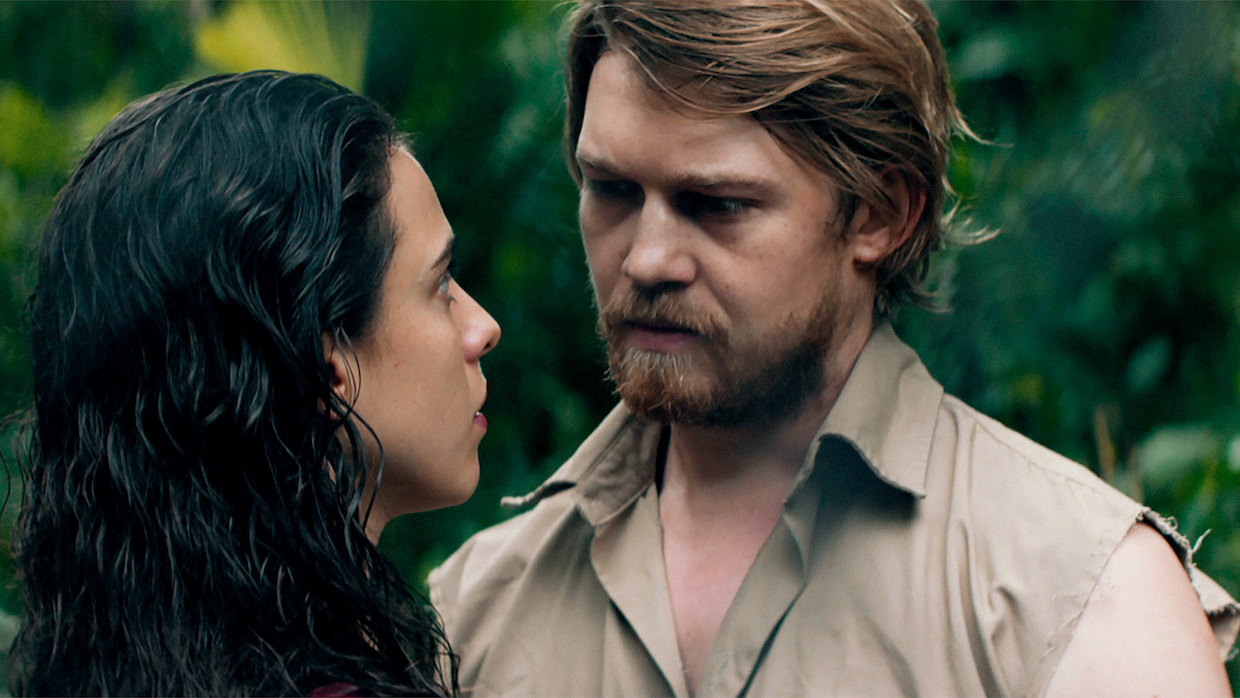 Margaret Qualley and Joe Alwyn in Stars at Noon

In France, I mostly don’t get immediately ID’d as American, which I assume is partially because I don’t conform to braying jackass US tourist type and partially because, the older I get, the more I look indeterminately “other.” Generally I first get spoken to in French and play along if I can, then when I can’t keep up I get “Do you speak English?” This is pretty flattering and will obviously only be an increasing asset as the American Experiment continues to go up in flames. A friend noted that, with its virulent displays of racism, Cristian Mungiu’s R.M.N. could just as well take place in the States—ironic, given how into the hyper-specific EU regulation weeds the film gets, but obviously accurate. For some time, Ron Howard threatened to remake Michael Haneke’s Caché; perhaps soon he can pivot to giving us a stateside non-period-piece version of Mungiu’s 4 Weeks, 3 Months and 2 Days to make up for adapting J.D. Vance’s Hillbilly Elegy.

I thought about this during the closing stretch of Claire Denis’s Stars at Noon, adapted with letter-of-the-law faithfulness from Denis Johnson’s novel. Trish (Margaret Qualley) is ostensibly a journalist floating around Nicaragua; the book is narrated in the first person and makes it quasi-clear that Trish is, in all likelihood, using journalism as a cover story for activities supporting a rebel group—which, along with a lot of other things, isn’t as clear in the adaptation. This ambiguity, however, doesn’t seem like a deliberate choice: while retaining something like 80% of the book’s dialogue and most of its plot, Denis’s second English-language film hollows out the political specifics and ditches the 1984, Nicaragua setting for the COVID-forward present. Following Both Sides of the Blade, Denis’s first feature this year, this is equally heavy on masks and testing protocols; she’s certainly not shying away from the moment, which leaves the un-updated political specifics in a weird achronological vacuum.

Trish starts an affair with a British oil company rep (or so he claims), Daniel (Joe Alwyn), who’s got unspecified heat on him; fleeing vague hostile forces, they find themselves at the Costa Rican border, where Trish encounters Stars’s only other American, played by Benny Safdie. “We’re Americans,” he tells her. “We’re friends.” This is all Trish needs to know that he’s up to no good—beware of US representatives who show up and claim to be your friend, a lesson countless countries have learned many times over. But though Denis’s work has intersected with political undercurrents many times, she’s never been precisely a political filmmaker, and her focus here is predictably and primarily directed towards the affair. There are, per usual, ultra-close-up shots of sex scenes, but I’m not sure I would have been able to blind ID this as a Denis film for a long time: the shot setups are the same but the textures are all different. In part, that’s because Denis has, at least temporarily, split from longtime DP Agnès Godard after Let the Sunshine In. Her subsequent work has been visually different and honestly not as good: here, she’s working with the formidable Eric Gautier (whose resume includes major work by Arnaud Desplechin, Olivier Assayas and Jia Zhangke), but everything feels off, including a surprising amount of standard and rather flat shot/reverse shot dialogue coverage. The moment that finally played unambiguously like her wasn’t visual but sonic, when Tindersticks’ score (which sounds uncustomarily like Talk Talk’s Laughing Stock, and is one of their better efforts in a while) gives way to their only song for the film. Trish and Daniel walk into a deserted nightclub, the sole dancefloor occupants as a hip-looking DJ commences to drop the bass on…noted club-banger-manufacturers Tindersticks, singing a song that repeats, ‘80s end credits style, the film’s title. It’s a nice song, and hence a nice moment, but still inadvertently goofy.

Stars’s biggest assets are comic, most of the time intentionally courtesy of Johnson’s Hunter S. Thompson-esque, holiday-in-hell dialogue. Margaret Qualley has the spirited chops to spit it out and hair even more impossibly volumized than that of her mom, Andie McDowell; when she showers and it’s briefly flat, this is as dramatic as any plot development. (It is, granted, hard to buy her as a constantly rum-swilling alcoholic, since she looks purely powered by a diet of green juice, self-care and extremely high-tier skin care products.) Unexpectedly zany touches include a cameo from, of all people, John C. Reilly, and a sight gag definitely not in the book where an uncharacteristically Wes Anderson-esque whip pan takes in a guy lying on the lobby couch, holding up a sign saying that the wifi at Trish’s digs is out—it makes literally no sense and is all the funnier for it. Stars is sloppy and the reason for its existence is unclear—there’s zero urgency in its politics, anti-American or otherwise, and its romanticism is stock—and the reception seems consensus lukewarm. Still, the lengthy running time (135 minutes) zipped by pretty well and I appreciated that this, even more than Let the Sunshine In, is the closest Denis may ever get to a comedy proper.

If I’m (regretfully, apologetically, tentatively) detecting a general falling-off in Denis’s work since Sunshine, I’m on safer ground noting the same in the Dardenne brothers’ output. 2016’s The Unknown Woman and 2019’s Young Ahmed were both received with widespread indifference or, in the case of the latter, hostility, with many diagnosing it as inadvertently racist in its demographic choices (the portrait of a young Muslim, the first in their work, as a jihadist). Tori and Lokita is an (of course!) well-meaning but totally non-urgent work—Ahmed at least had energy while running after a pintsize protagonist who pursued his goal to bomb people with the hilariously single-minded dedication of Chucky the killer doll, but this is fairly sleepy.

Lokita (Mbundu Joely) is the older of the pair, a Beninese refugee who’s pretending to be the older sister of adolescent Tori (Mbundu Joely). Their sibling-esque relationship sustains them both, but Belgian social services won’t grant Lokita residency papers unless she can prove their literal kinship. (Tori, as a child accused of being a sorcerer, has already been granted asylum status.) Plot mechanics place Lokita in the clutches of a gang of marijuana dealers, whose horrendous treatment of her escalates a relentless narrative cycle of racism and sexual assault. The Dardennes make work with the political clarity and explicitly polemical aims of a particularly smart NGO—and more power to their desire to make the world a better place via greater artistry than the average issue-driven doc—but their diagnosis here is weirdly off. The drug trade has been linked to a lot, including rampant violence, but that’s a product of its criminalization rather than the drugs per se. Stoners certainly aren’t the core force driving migrants into a relentless cycle of exploitation (my most libertarian opinion is legalize all drugs, and weed especially is kind of a no-brainer), and the Dardennes’ indictment therefore strikes me as strangely misguided, which would matter less if there were more to the film’s textures or urgency in its unfolding.