Cannes in Memories and Playlists: Producer Melissa Adeyemo on Pitching Projects Along the Croisette 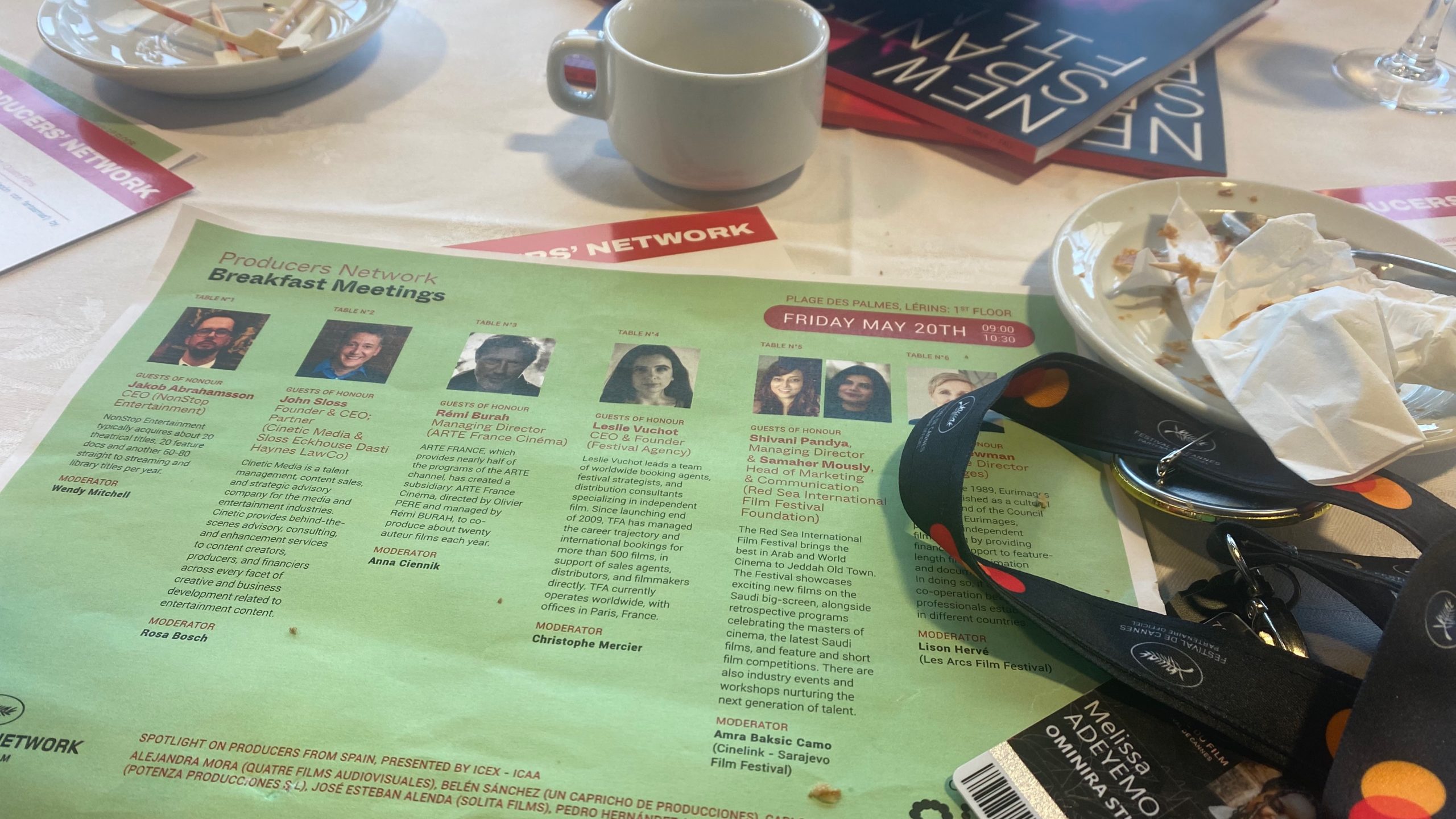 I love music, and my walks around the world have often been narrated by various artists, mainly American rappers, as they paint stories that detail everyday experiences and color my memories and thoughts. My trip to Cannes as a Gotham Producer’s Network Fellow this year was no different, so please indulge me in the narrative direction my story takes, guided by the songs on my playlist.

Nipsey Hussle: “Grinding All My Life/Stuck in the Grind”

Cannes is my first fully in-person festival since Berlin, 2020, and it comes at a critical time for me. I see the invite as a clear marker to a fresh start, which, after the last few years, we all need. And I am taking that shit.

Kendrick Lamar: “How Much Does a Dollar Cost”

How much a dollar really cost? The question is detrimental, paralyzing my thoughts. Parasites in my stomach keep me with a gut feeling, y’all.

Generating early buzz for projects of first-time filmmakers (for projects of any filmmaker, really) is incredibly beneficial. Festivals, labs, one-off industry programs and events all get the market excited about filmmakers and their projects. This early enthusiasm makes it not only easier to sell films when they are completed but also helps align filmmakers with the festival programmers, distributors and production partners who will support them in the later parts of the filmmakers’ careers.

To prepare for Cannes I start by reaching out to executives and other contacts two weeks before leaving. By the time of my arrival, I have meetings planned with several different sales agents, producers, etc., who I had met during my last feature production, Eyimofe. I learned then that the idea of the film business being a meritocracy and great content rising to the top is a fallacy. There is no Netflix or Hulu deal coming to save you. That five-year window when they were courting indie filmmakers to build their library is now over.

So, as a producer, you continually have to make opportunities for your films and filmmakers happen. I go into this Cannes focused on two films. The first is my first documentary, Dusty & Stones, by Jesse Rudoy. The other is a narrative feature in early development, In My Father’s House, by Abbesi Akhamie. Luckily, In My Father’s House was nominated on Wscripted’s second Cannes Screenplay List, presented by MUBI, an honor announced on the second official day of Cannes by Screen Daily. And Dusty & Stones has a number of industry labs and markets behind it already including the Gotham Documentary Lab, Film Independent’s Fast Track, and Durban Film Mart’s Financing Intensive, to name a few.

Nipsey Hussle & Jay-Z: “This Is What It Feels Like”

You get successful, then it gets stressful, thirst, Muthafuckas gon’ test you, see what your texture’s worth

Diamonds and pipes, one of them pressure bursts

I arrive in Cannes two days early so as to be bright-eyed and bushy-tailed for the festival’s official start. I actually have meetings the day I land, but I move them back since my flight was delayed. I use the extra time to do my homework again. I go over the details of each of my films and filmmakers, who are both first-time directors, and think about why they are essential to the global market, and I try in advance to prepare for the potential questions that could be posed to us. I sometimes feel like I’m Annie in Collateral – going over pieces of work that I have already done and then starting over again so it feels natural when I speak, but it’s not. This fluency is just hard work made for you to believe it comes naturally to me. I grab my pass and do a quick tour of the Marche (market) within the Palais.

Cannes is still the most prominent film market in the world. There are various sales, production, and distribution companies from all over the world inside the Palais and at several makeshift offices along Croissette Boulevard and all through the principal streets in the center city of Cannes. I walk the Palais and the Croissette to get acclimated — to ground myself before the real hustle begins.

Bad vibes, get off of me, Outta here with that fuckery, Treat my goals like property, Collect them like Monopoly.

I start the first two days off with back-to-back meetings and film parties. Cannes is a stream of films, parties, uber-luxury brand events, and the film business — all equally mixed, if you do it right. Film meetings and parties lead to more film meetings and parties – although fewer films – for me. As I move through the festival, I am not mad about that, as there are so many people to see and talk to, some who I haven’t connected with in years. Films can wait… can’t they?

A day or two into the festival, we have our first Producers Network event. The Producers Network is a gathering of producers from all over the world, invited by the Network’s various global partners, who participate in programs and morning events where they meet global industry professionals, such as reps from Sony Pictures Classic, Visions du Reel and Hot Docs programmers, and executives from international financing arms, etc. Each morning there’s a breakfast roundtable with eight to ten other global producers speaking to one of these industry professionals about their work. (Not your work, by the way – if you pitch your project in this environment, they probably won’t remember it. Just make sure to lock a business card to follow up later and start building a relationship.)

These meetings are dating on steroids. I love talking to people, so none of this bothers me or scares me. I focus on being authentic and hope for connections and access that I can build on.

Or better yet, here’s a verse from Hamlet, Lord, we know who we are, Yet we know not what we may be, So maybe I’m the one, or maybe I’m crazy 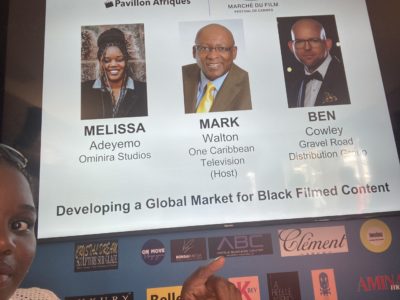 I was invited to speak on a panel titled “Developing a Global Market For Black Filmed Content” at the African Pavillion. My background in working with African and Black content creators throughout my career gives me a unique perspective on the topic as a producer. What do we need to create a global market for Black filmed content? What does Black filmed Content consist of? What is the value of that content?

I love panels because I love sharing what I know and hearing what other people have to say. It tests my knowledge in real-time. It feels crazy to be having this panel in some ways, given how many people have told me African content wouldn’t reach certain levels. Fuck those people. We discuss the film business in Africa and how feasible it is to have an extensive market there and beyond.

I speak about how the statistics above limit the ability of an intracontinental distribution network, a direct answer to a question from the audience. I reiterate a lot of what I have already said here: come to the market early, build networks, etc. I was able to impart wisdom and my thoughts on what we need to be thinking about how to get Black filmed content out in a competitive global market. The panel sparked more questions than answers in me, though. But those are the best panels, right?

And I got pressure on me, Seven days a week, it’s game seven on me, Life’ll test you out, you live through that, that’s testimony, Givin’ ’em hell but how in the hell I got all these blessings on me?

I am excited about connecting with my African collaborators, mentors and filmmakers. Seeing them makes me realize how expansive my community has become over the last few years through programs like Creative Producers Indaba and partnerships like Statement Films + Topic. I see people from all over the world and my many walks of life in this business, including from my time at iROKO TV and New York African media organizations.

There truly are no wasted experiences, I realize. If you can keep your head on long enough and move straight ahead, people come back in special ways. Just try not to chat shit along the way.

Fivio Foreign on Kanye’s “Off the Grid”

I met her in church, she pray for me, She my God-sister (God-sister), yeah, I’m only trustin’ the people I keep close, Muthafuckas sellin’ they soul for a repost

In the midst of hustling, I connect with old friends. And some of my meetings are with people who will hopefully become new friends. That’s the best part. Over the years, I have learned how important one’s filmmaking community can be in terms of making great content and supporting filmmakers. It feels great to be in a foreign country and recognize I have that now in spades and that I continue to grow this community organically.

While hustling to prove the value of my current film babies and get the right partners for them, I start to hit my stride during these 12 – 16-hour days on the Croisette. I have lunch, dinner, or drinks with a friend (or group of film friends) each day. My b-school friend, Ashley, works at EOne, and she is kind enough to have me over for lunch a few times. The food in their office is great, and I am grateful for the vegetables that haven’t been doused in cream or poorly seasoned. I am vegan, so vegetables are necessary, but I am vegetarian light to make it through at Cannes. I brought vegan protein bars, knowing that they save lives and help with hangovers.

I meet with my mentor Roshi at Attagirl, one of the development labs I have participated in for In My Father’s House. She and the former EAVE group she introduces me to are really lovely and brilliant. I am grateful for Roshi’s guidance on all things film and life. She helps me think about the film business and building a sustainable life in it.

The Gotham Fellows have dinner. They have all made dope films these last couple of years, and we talk about a bunch of things. The differences we see between Cannes and Sundance, Johnny Depp and Amber Heard, and the Nigerian film industry — the latter when I am drunk. I like the bunch of them. They are cool. I hope to get to hang out with them more, here or in the future. Producing is hard, so the more allies the better. 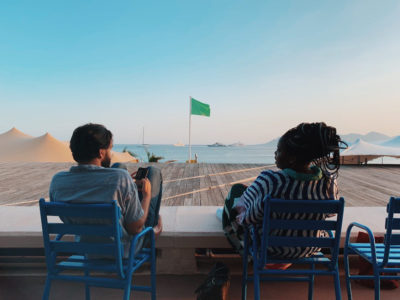 I am out. I spent ten days at the festival and could have easily done a few more just to focus on the films that have gotten lost while in the travails of this industry we love. Damn. Next time, I will come earlier and stay later, for sure. At least, I got to connect with my community — one that has definitely grown since I started, and one that I hope to remain connected with throughout my career. Luckily, I got real traction on both of my films — programmers excited to give Dusty & Stones a real shake and potential EPs and production companies excited to read our script on In My Father’s House. These are small steps, but you have to take every opportunity and start somewhere. ‘Til next time.