“Cinema Doesn’t Heal or Cure You of Anything”: Dario Argento on “the Pleasure of Terrible Ceremonies” and His 20-Film Retrospective 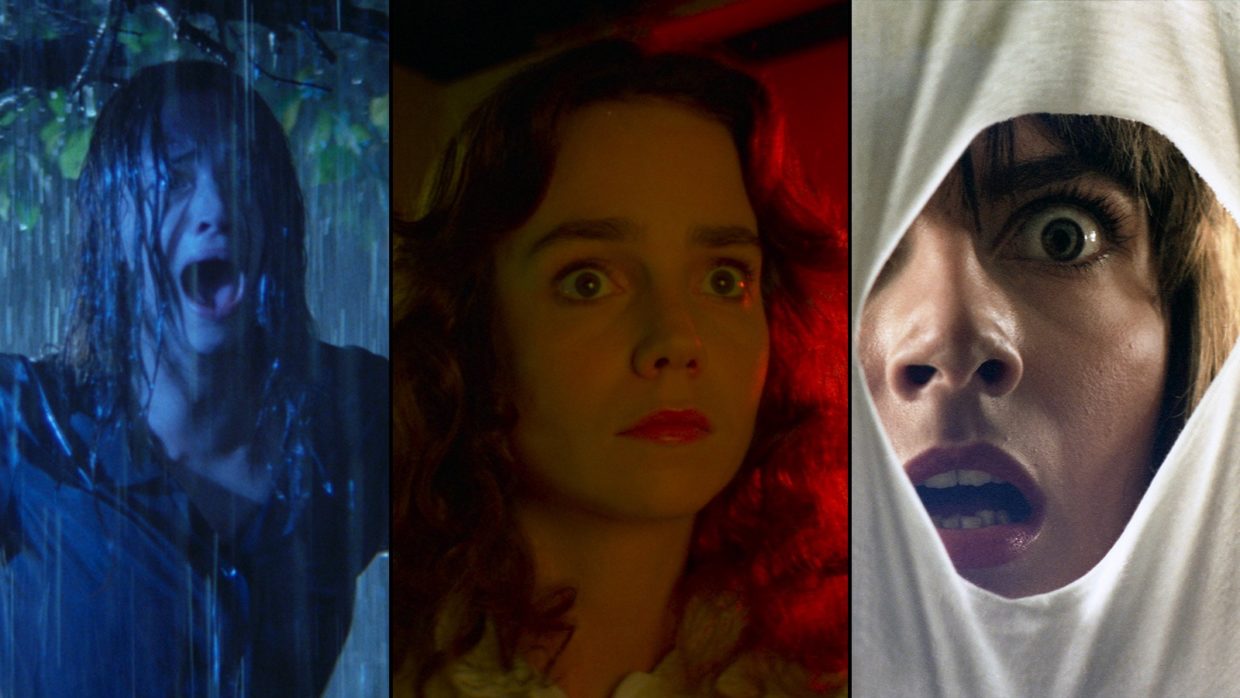 The day before the start of his 20-film retrospective at Film at Lincoln Center, Dario Argento talked with film historian Rob King in front of a small delegation at the Italian Cultural Institute. King started by pointing out that the director has now directed giallo films for 53 years, or “four years longer than John Ford made westerns.” Asked what the genre means, Argento said he’s been asked this question thousands of times and that “once more” he will answer—“I don’t know.” Asked if his approach to directing giallo has changed, he also answered as he always has—No. He simply follows his instincts.

Of the 20 films in the retrospective, 17 have been newly restored in 4K resolution. The work, as the Consul General of Italy in New York, Fabrizio Di Michele, put it in his introduction, is “to blame for many sleepless nights.” But having fabricated all these gory murders for the screen, the filmmaker said he has “slept pretty fine” himself. King referenced Thomas De Quincey’s 1827 satirical essay, “On Murder Considered as one of the Fine Arts,” before asking Argento, basically, what the relationship between murder and art is. The filmmaker called Quincey’s book “mad,” then slightly eluded the question, saying “I think people like horror films because it provokes such strong sensations that they do not understand. I have friendship and solidarity with these awful stories–[I receive] a feeling of great pleasure from these terrible ceremonies.”

King ended the talk by asking: “Are there any murders you’ve imagined that you have not shot or that have been cut from your films?” Argento replied, “All of the ones I’ve imagined I have shot.” The small crowd applauded.

Before the talk, I interviewed Argento with translator Michael Moore in an archive at the Italian Cultural Institute. Having read how his films often stem from “little ideas” that “upset” him, I asked him if he was scared by anything in his own films. He said, “No, I’m not scared of my own films. They’re stories that I tell that come from deep inside of me, I know them well. So once they’re done, I don’t see them. I see them rarely or even never, because once they’re done, I want to work on the next project and look towards the future.”

I wondered if creating or finishing films ever helped him quell the fears that inspired them—if he found filmmaking therapeutic. Midway through the question, Argento began to mutter “No. No,” then said, “Cinema is not therapy. It’s very important work, but it’s concentrated on story. It would be too easy if cinema were a form of therapy, because everyone would, rather than go to a psychoanalyst, just go to the movies. Cinema doesn’t heal or cure you of anything. What cinema is, is telling a story of something that impulsively comes from inside of you—from your soul. In my case, it’s something that is suggested from deep within. I start with a very small idea, and around that idea, I build the puzzle, and add to it until I have the whole film. It’s a small but very important idea.

“So why do I make cinema? Maybe because in reality I want to be loved by the public.”

I posited that going to the cinema in the US today can even be an anxious experience, that I have had paranoid thoughts while sitting in a theater—plotting my exit, or imagining what I might do if a shooting were to happen. I said these fears are more pronounced when seeing films reminiscent of those whose premieres have been targeted by shooters, such as Batman movies. I remember a statement the LAPD made when police amplified their presence at theaters across the nation for the Joker premiere: “The Los Angeles Police Department is aware of public concerns and the historical significance associated with the premiere of Joker.” I was struck by “historical significance.”

After a moment, Argento added, “I don’t think it’s because the superhero or Batman movies express some particular kind of violence. They’re very simple films, and even a little bit dumb. But what they do is draw a very young and crowded audience. So, when the shooter goes to the theater, he knows he’ll find it full of people and be able to kill as many people as possible. That’s why it happens with these particular films.”

I have found interviewing filmmakers to be like its own film education, so I asked Argento whether he still carries any lessons or memories from the directors he interviewed as a young film critic.

“I did learn a lot. Before becoming a director, I was a journalist, and in my work, I interviewed a lot of famous directors, for instance, Fritz Lang and John Huston. I remember in particular an interview with Jean-Luc Godard that was very strange and bizarre. There were many others—many that I don’t recall. But what I learned from them was what cinema is. It’s different from literature or painting. It’s very mysterious. It’s born inside of you. You have to tell it not on the page, but through images.”

Back in his talk with King, Argento maintained that “the camera is the most important element of cinema.”

One of the director’s first projects was helping Sergio Leone and Bernardo Bertolucci write Once Upon A Time in the West, which he says helped him begin to formulate creative deaths or murders on screen. His feature debut, The Bird with the Crystal Plumage, presented many of what would come to be known as the maestro’s signature tropes and qualities—a disembodied killer, whiz-bang camerawork, a pervasive score (this time by Ennio Morricone), etc. Despite the toxic relationship between the director and lead actor Tony Musante, the film was a critical and box-office success. I asked him what he thought about negative collaborations that still happen to yield interesting or positive results on screen. Argento’s answer fixated on his memory of Musante, a story that occassionally and suddenly inspired his limbs to become quite animated and spiderlike.

“I don’t have a particularly good memory of that strained relationship. It’s an awful memory, actually. I remember that every morning going to set was like a nightmare—the fact that I was going to run into Tony Musante. On the set, we would argue and argue. When the film was over and he had to return to the United States, I went home, it was 10 at night, and then I heard this knocking at the door. I look through the peephole, and it’s him! And he kept knocking, louder and louder on this big heavy door, yelling,  ‘Argento! Open the door! Open the door!’

“I didn’t open it. It’s ten o clock, why should he even think that I’m home? So, I just kept quiet and he finally left. When the film came out and it was a big success also in the US, he gave me a phone call about how great it was and how great it had been to work together, and I said, ‘No, it was not great to work together. Please don’t ever phone me again.’”

In hindsight, I wish I had asked the director more about his work’s pleasures than about their fears and anxieties. Watching the beautifully restored Tenebrae, in which the director plays with his own likeness through protagonist Peter Neal, a murder mystery writer, it was those strange, pleasurable “sensations” that stood out, and which Argento gave priority at every turn.

Inside of Dario Argento: Two or Three Things We Know About Him, the tall book that Cinecittà (who restored the films) is releasing in tandem with the retrospective, are a series of interviews and essays surrounding Argento’s work across decades—evidence that the maestro has over the years talked about his films and filmmaking in more or less the same way.

Argento’s answer to John Carpenter’s question “Where does the fear, the darkness come from in your films?” which the book adapts from a 1999 interview at the Turin Film Festival, echoes many of his answers to me, King, and moderators and audience members at Lincoln Center today:

“That’s the most difficult question anyone can ask me, so I’ll ask you the same thing; that’ll teach you! Fear is instinctive. I’ll be honest with you: I don’t know where it comes from—from deep inside—from when I was a child, from that long hall I had to walk down at home to get to my bedroom. You remember your first 3D horror movie. I remember the first horror movie I saw—Phantom of the Opera—which really changed my life. It made me discover a world I didn’t know—a world where ghosts and dark passions lurked in the basement. I had no idea these things existed. I think it fascinated me. I had a long illness when I was a teenager, so I stayed at home for a few months. I couldn’t move because of my rheumatic fever. Then I went to my father’s library and started selecting books and reading everything I could find. I devoured everything omnivorously: essays, Shakespeare, the lot. In the end, I came across a book of stories by Edgar Allan Poe. I fell in love! This was so much more than The Phantom of the Opera: here was the most incredible fantasy, and I think these tales changed something in my life. They showed me that famous door you open, where behind it there’s this panorama you’ve never seen before, revealing different colors and emotions. People ask me, ‘Why don’t you make other films, other genres?’ It’s impossible, because once you’ve walked through that door when you’ve felt such violent and destructive sensations on the verge of the impossible, how can you go back to narrating everyday life, normal life—just life…? Someone like you, so used to fantasy and conjuring up monsters that emerge from holes and possess you; someone who imagines a girl going off to boarding school only to find that all the others are witches. Can you imagine doing anything else?”