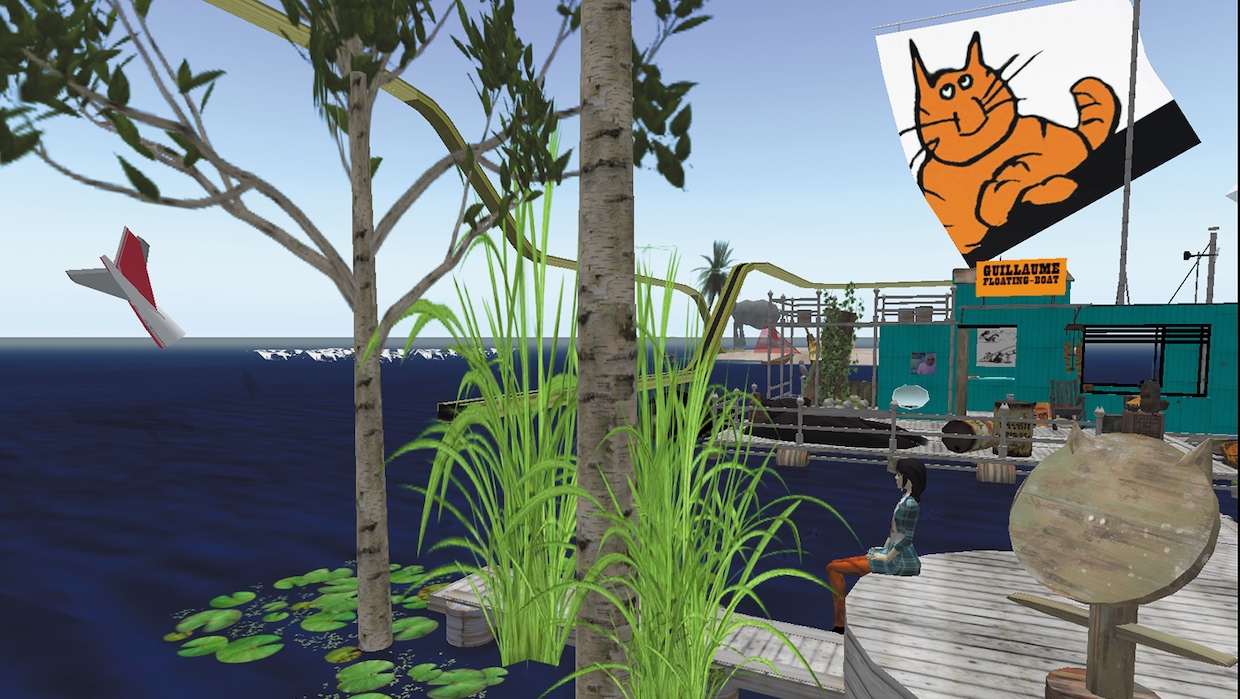 “I’ll find you,” Chris Marker told Damon Krukowski and Naomi Yang. The first time they met—New Year’s Day, 1999, at the Café de Flore in Paris—they had no idea what he looked like until he beckoned to them. There weren’t photos of him anywhere; he’d send illustrations of his cat, Guillaume-en-Égypte, if anyone asked for a picture. Krukowski and Yang wished to collaborate on an English language edition of the director’s CD-ROM project, Immemory. He could be difficult to reach but liked musicians and made time for the duo—formerly of Galaxie 500—who have performed as Damon & Naomi since 1991.

Marker was sitting outside in perfect anonymity in the middle of Saint-Germain-des-Prés. “It was like a spy movie,” Krukowski told me. Marker handed them spools of old wire recordings and asked whether the pair could help deliver them to someone in the United States who could transfer the audio. “I need you to take very good care of these,” he told them, stressing how important the spools were. The Cambridge-based musicians agreed to deliver the recordings, which involved no small fuss at the airport—Yang pleaded with airport security staff not to send the spools through the X-ray machine—and “very Third Man” calls to arrange the pickup around New York. Once the spools changed hands, Marker contacted them by fax. Thus began their involvement with Immemory, which has lasted more than two decades in formats both digital and analog.

First released in 1997, Immemory is a memoir in digital bricolage. Marker’s recollections of family and childhood are arranged alongside commentary on art, Proust, Hitchcock and references to technologies like Singer sewing machines and Rolleiflex cameras. Guillaume the cat acts as the CD-ROM tour guide in playful interruptions and comic book-style dialogue bubbles. The images are pixelated, the sound effects tinny, but these limitations to the form—apparent even back in the ’90s—are the work’s signature, along with the pleasantly meandering pace as the user skips through collages of superimposed images and Marker’s beautifully written texts.

Marker built Immemory on an Apple IIGS with software developed for schoolchildren called HyperStudio. It looks somewhat like a website, but the hypertext architecture is unique, and the CD-ROM has been plagued with compatibility issues since its release. Centre Pompidou, Marker’s producer, hired a digital agency early on to adapt it for Microsoft computers, but he sparred with them, unwilling to make changes to its functionality. For the English-language edition released in 2002, Yang had to rebuild the CD-ROM architecture from scratch, retracing all the hyperlink pathways between images and texts. In 2008, Krukowski and Yang’s publishing company Exact Change remastered Immemory for OS X; in 2011, the Pompidou created a version of it for the web using now-obsolete Adobe Flash. It’s been a “quicksand jigsaw puzzle,” Yang told me.

Immemory was the first non-print project for Exact Change, which ordinarily publishes paperbacks by avant-garde authors like Denton Welch, Unica Zürn and Fernando Pessoa. The next version, which they are working on now, will be what Marker called his “Gutenberg edition.” Paper, after all, is “way more permanent than Mac OS 7.5,” Krukowski said. “If it’s locked in a secret format, that didn’t seem so tragic to” Marker, but this is the best chance for Immemory to survive. Yang, the project designer, is thinking through the technical and conceptual challenges of this particular adaptation process: is a link necessarily a page break? How much repetition is essential to faithfully transfer this work? The project’s model is Julio Cortázar’s 1963 Hopscotch, a novel that can be read in various sequences of pages.

Marker thought of himself as a “Sunday programmer,” and Yang remembers, with a laugh, that his experiments with computers “didn’t always work so well.” When he’s send her emails, she recalls, “It was always something that he had hacked from somewhere. It was something incredibly buggy. Or it would freeze my computer. He got it off of some place on the internet or some hacker.”

Marker’s best known films, Sans Soleil (1983) and La Jetée (1962), demonstrate his creative approaches to cinema as a technology—the latter a short composed of still images, the former a feature shot entirely with a silent film camera. He worked in a variety of formats—radio plays, novels, documentary—and blended formats, most notably in his form-expanding work with the “film essay.” In the ’80s, Marker developed DIALECTOR, a chatbot program that speaks in an arresting and attentive fashion; for example, “PRESS RETURN IF YOU CONSIDER IT’S NONE OF MY BUSINESS ENTER THE NAME OF SOMEONE YOU LIKE?” and “DO YOU KNOW THAT EVERY CAT HAS HIS GUARDIAN OWL?” His writing for the automated voice is so present, curious and intimate that the projects hold up, even today, with chatbots now an inescapable nuisance in customer service.

A similar playfulness comes through in Marker’s 1997 film Level Five, which begins and ends with a woman speaking to the camera about her departed lover and the project he left her to complete, a video game about the Battle of Okinawa. She’s distracted by her memories of the man who once “wrote at night, late, sitting at the computer, before [he] logged out.” The actress sits before a computer in the chair in Marker’s own workspace, where he had created Immemory. Marker—offscreen, naturally—contributes discursive voice-over narration on Minitel and Otto Preminger’s Laura. Watching the film feels a bit like browsing the internet in the ’90s, with quick cuts from glitchy screens to clips of interview subjects, maps and dissolving rudimentary computer graphics. Level Five conveys a poetic vision of computers as an imperfect tool for remembering and engaging with history; it captures the hearts poured out over email, the intimacy shared in abstraction.

Krukowski and Yang became close with Marker as they worked on Immemory and would visit him whenever they were in Paris. Marker would always blend in with the crowd. Even when they attended a showing of Agnès Varda’s work together, no one recognized him. When Marker’s health was failing and he was no longer able to travel, he invited friends to join him in a digital sanctuary Max Moswitzer helped develop on Second Life, a sort of virtual museum in paradise with Guillaume there to greet visitors. Yang created an avatar, and they’d hold meetings in the virtual world—“Ouvroir”—to discuss the progress of the Gutenberg edition of Immemory.

Marker acted the same on Second Life as he did in person, Yang remembers, and his avatar looked like himself, just younger. When I told Yang I might have expected him to have a Guillaume avatar in Second Life, she noted that the companionship of his cat was always part of the joke. Guillaume is the prankster in his work, and “Chris is like the straight man.” Via Second Life, Marker made a rare public appearance at the Harvard Film Archive in 2009, which livestreamed him from Ouvroir. I was in the audience that night, and while I recall the physical world crowd was enthusiastic, something unclear to me at the time seemed awry in the virtual world. A decade later, I learned the problem was that the Second Life island had become mobbed with the avatars of strangers, an experience Marker found unnerving—“exactly the situation that he spent so much effort avoiding in real life,” Krukowski said.

After Marker’s death in 2012, Exact Change put the Gutenberg edition of Immemory on hold. They felt an enormous obligation to complete the project, as promised, but it became tricky without his vision. There would be no more meetings in Ouvroir.

Several years later, Isabel Ochoa Gold, a doctoral student at UCLA, read about Immemory in a paper by film scholar Marsha Kinder. She found the work’s Flash version on Gorgomancy.net, a website Chris Marker set up with the Pompidou, and wrote to Krukowski and Yang to let them know that Flash was scheduled to expire at the end of 2020. Through them, she learned about the so-called Gutenberg version, which Gold then wrote about in a feature for Criterion’s Current. Yang even invited Gold to work on the project, sending her an antiquated Macintosh—a “spry geezer” Gold told me— found on eBay and, at present, the only way one can view Immemory (besides a less-than-engaging four-hour documentation of it that a fan uploaded to YouTube). Though she never had a chance to meet Marker, Gold feels like she’s come to know him through his footprints, which linger on the internet: “Chris Marker seems to be alive and impish [online]. I keep finding him with these anonymous YouTube accounts, and his Second Life island is still there, even though no one’s on there.”

While Exact Change hasn’t set a release date for the book yet, Gold’s presence breathes new life in a project that had felt overwhelming to the Exact Change publishers. “Isabel appearing, that’s such a Chris thing,” Yang told me. It’s like Marker had “dreamed [her] up. This beautiful young woman comes in and is like, ‘I think we can do this.’ And, magically, she has no problem with all the screenshots and capturing it, and has a great sense of it.” (And she loves cats.)

Many years after they delivered the wire recordings for Marker, Krukowski and Yang asked what audio had been on them, anyway. “Nothing really,” Marker told them, appearing to have forgotten all about the spools he once handed to them with intense secrecy. “It was one of those many, many mysteries of Chris,” Krukowski said. The personal computer enhanced these mysteries: He could be part of the world while invisible, in a way, as he made friends with hackers and Second Life weirdos, freed in online communications from others’ expectations and the weight of his legacy. He could work alone with sound and images, manipulate images and do everything with one machine with layers of anonymity that complemented his elusive nature. On the discs he’d send to Exact Change, there would be no memory left; he would push the technology to its limit. Marker once told them, “I’ve been waiting my whole life for this machine.”