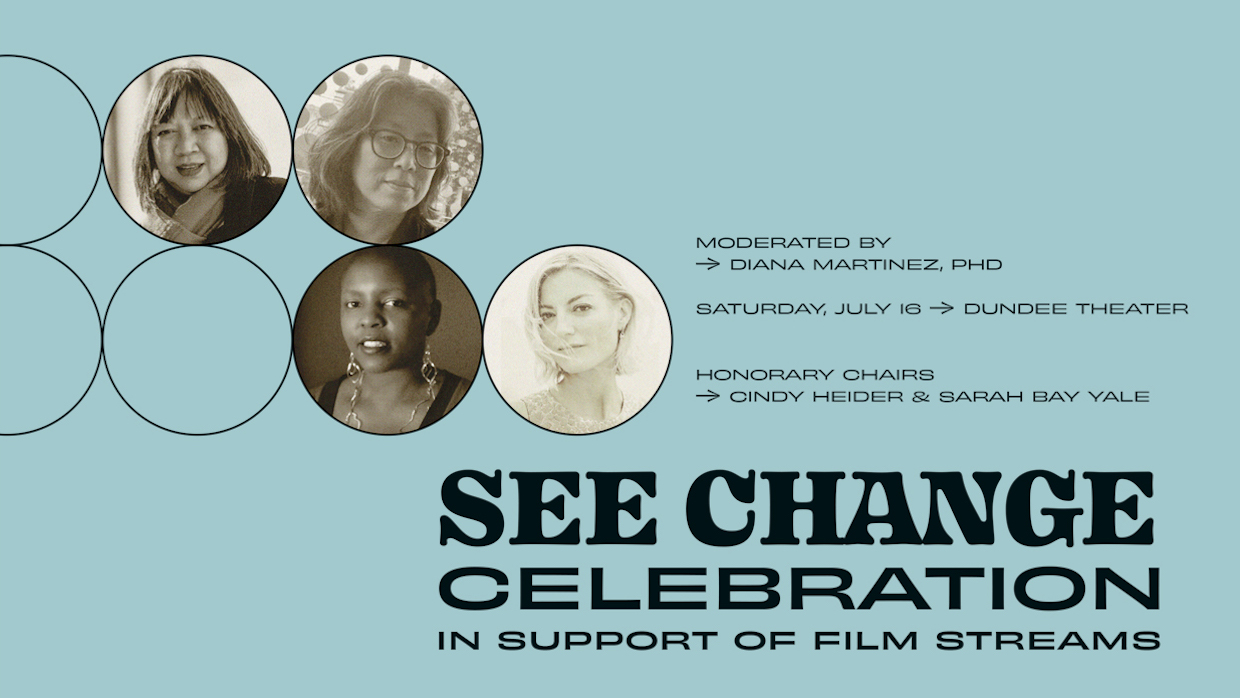 Film Streams Executive Director Deirdre Haj, who took on the title last year after founder Rachel Jacobson stepped into a new role as President of Heritage Services in Omaha, previously led the Full Frame Documentary Film Festival. During her 11-year tenure at Full Frame, Haj says that “before people were talking about gender parity, we were just doing it.” Her long-standing commitment to parity is what drew her to the job at Film Streams, which had just launched the See Change initiative the year before.

“We wanted to put our money where our mouth is,” says Haj about platforming women documentarians for the inaugural See Change fundraising event. She added that the non-fiction realm also has a higher percentage of working women directors as opposed to narrative feature filmmaking. According to the 2020-21 findings on independently-produced features from the San Diego State University’s Center for the Study of Women in Television and Film, women comprised 41% of documentary directors, while 37% of feature-helmers were women.

An even more dire statistic comes from the USC Annenberg Inclusion Initiative. The study found that of the 1,448 directing credits that appeared in the 1,300 popular new releases between the years 2007-2019, only 70 of those credits included a woman director. That means that only 4.8% of the titles surveyed featured a woman director.

Additionally, Haj notes that women filmmakers are often under-highlighted because they simply aren’t given access to resources—budgetary or otherwise—of the same caliber as their male counterparts. “You gave her finger paint, and the other guy got oil,” she says, insisting that the industry must go above and beyond to meaningfully support women directors and their work. “It’s not about equality, it’s about equity. You need to give an extra hand, you need to give a step up.”

The See Change initiative was founded in 2020 with the goal of meeting 50% gender parity among Film Streams theatrical programming. The non-profit owns the Dundee and the Ruth Sokolof theaters, both two-screen cinemas situated in Omaha. While its initial goal was to reach 50% parity by 2021, the initiative unfortunately fell short. When the 2021 calendar year came to a close, See Change found that only 39% of its programming was women-directed.

“39% in 2021 was the best we could do,” says Haj. She emphasizes the fact that to her knowledge, no other theaters are taking on the same goal. According to Film Streams’ site, “we are the only arthouse organization tracking our efforts in this way.”

Haj adds that our current cinematic climate might also have something to do with the lower-than-desired parity percentage, particularly when considering the added pressure of the pandemic and a subsequent increase in streaming-exclusive premieres.

“If a film is moving to a streamer in 10 days, we have less time to get people into the theater,” she says. “We can book it, but that doesn’t mean that people are going to come, since most people attend movies due to word of mouth.”

Despite these setbacks, Haj is steadfast in her commitment to champion women directors, especially when it comes to promoting viewer engagement with female filmmakers in her own community. She notes that due to Omaha’s blistering summer heat, many of Film Streams’ higher-profile donors leave the city. She approached several of them and asked if they would buy a ticket anyway and pay it forward to a community member who may not have been able to afford one. As a result, half of the tickets at the See Change celebration have been donated.

Yet there’s a lingering issue regarding nonprofit art house funding in general, which Haj believes should be on par with other prominent cultural institutions.

“Art houses should be funded the way any museum, symphony or opera is,” she says. “Before I die, I want everyone to think of their local art house that way.”

The Film Streams See Change celebration will kick off with a cocktail hour at 6 p.m., followed by the main presentation at 7 p.m. It all takes place on Saturday, July 16 at the Dundee Theater in Omaha.