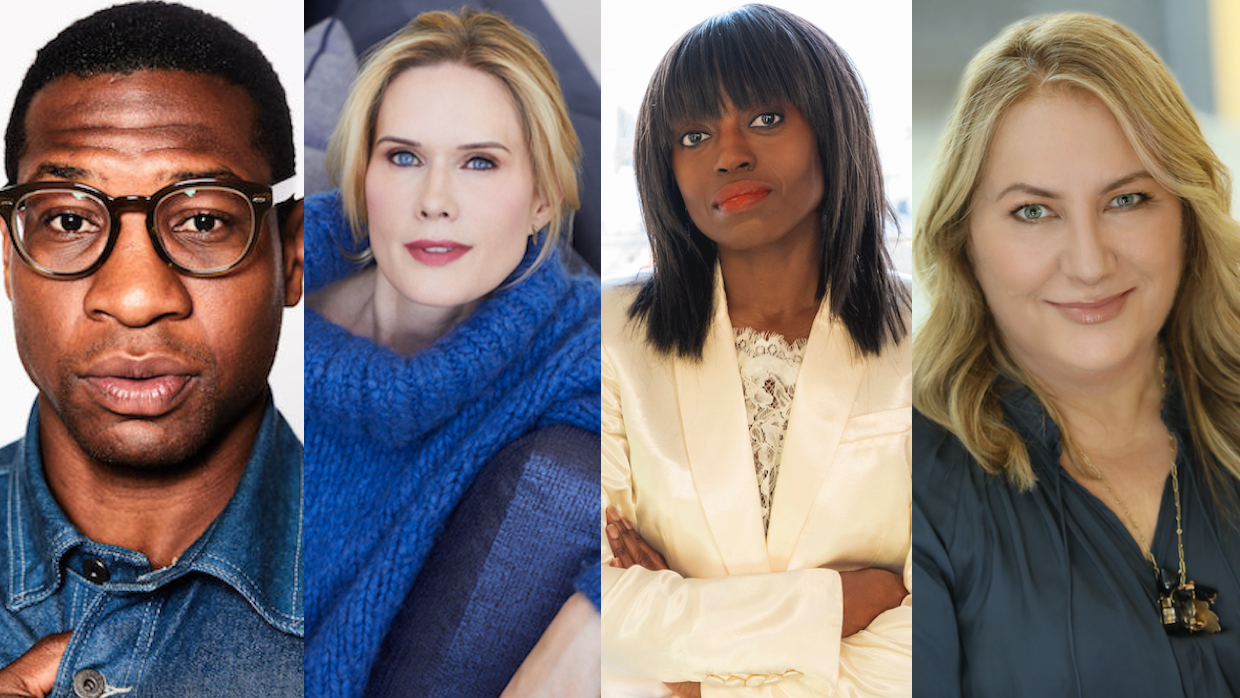 “We are thrilled that these four brilliant media and entertainment veterans are bringing their unique perspectives and expertise to The Gotham’s board,” Jeffrey Sharp, Executive Director of The Gotham Film & Media Institute, said in a press release. “As we find new and innovative ways to advance our mission and expand our impact, we know that Jonathan, Stephanie, Dee, and Lisa will be invaluable voices on our Board.”

This announcement arrives ahead of the 2022 Gotham Week Conference and Expo, which runs from Saturday, September 17 through Friday, September 23. According to the press release, “the Conference will feature topical conversations that emphasize the value of original work and expression, spanning fiction and documentary feature films to TV series and audio. It will take an in depth look into how creators—both emerging and established—approach their craft and career in the industry.” For more information on the events being hosted, visit the official webpage.

Filmmaker will be hosting four panels during Gotham Week, which you can RSVP to using the hyperlinks below:

The Art of the Documentary Edit on Wednesday, September 21 from 1-2 p.m.

Find brief bios on the four new board members below.

Emmy, Critics’ Choice, Independent Spirit and Gotham award nominee Jonathan Majors cemented himself as the Hollywood actor to watch following his on-screen debut in 2017’s ABC miniseries When We Rise. Up next, the actor will star in Black Label Media’s Devotion, directed by J.D. Dillard. Majors will play Jesse Brown, the first black man in U.S. Naval history to become a fighter pilot. The film will be released in theaters on November 23, 2022. Following his surprise appearance in the penultimate episode of the hit Marvel series Loki, Majors will soon be seen as Kang the Conqueror in Ant-Man and the Wasp: Quantumania, which will open in theaters on February 17, 2023. Majors is also set to star in Creed III, slated for theatrical release on March 3, 2023, as a mysterious villain set to face off against Michael B Jordan’s Adonis Creed. The actor most recently wrapped production on Magazine Dreams, which Majors executive produces under his Tall Street Productions. Majors is also set to star in and produce The Man in My Basement, the film adaptation of the Walter Mosley novel.

Most recently, Majors starred in The Harder They Fall, which opened the London Film Festival and premiered on Netflix on November 3, 2021. The movie quickly went to the top of Netflix’s Top 10 before generating over 1 billion streaming minutes in its first week on the platform. Majors and the cast were honored with the Gotham Awards Ensemble Tribute and Majors also received an NAACP nomination for Outstanding Actor for the role. In 2020, the actor starred in HBO’s straight-to-series drama Lovecraft Country, which broke digital records for the network. Majors’ portrayal of Atticus Freeman earned him his first Emmy nomination in addition to Critics Choice, NAACP and SAG nominations. The actor can be seen in Spike Lee’s epic war drama Da 5 Bloods, which premiered on Netflix in June 2020. In February 2019, Majors received rave reviews for his performance in Joe Talbot’s The Last Black Man in San Francisco following its premiere at the Sundance Film Festival. For his role as Montgomery Allen, Majors was nominated for a Gotham Award in the category of Breakthrough Actor and an Independent Spirit Award for Best Supporting Male. That same year, Majors starred in Max Winkler’s Jungleland; Focus Features’ sci-fi thriller Captive State directed by Rupert Wyatt and Gully. In 2018, Majors starred in Sony Pictures’ White Boy Rick and in 2017, he appeared in Scott Cooper’s American Western film Hostiles.

Jonathan graduated from the Yale School of Drama with an MFA in acting and was a recipient of the Lloyd Richards Scholarship and the Jerome L. Green Scholarship. A native of Dallas, Texas, and graduate of North Carolina School of the Arts, Jonathan’s extensive stage credits include productions of Henry V, A Raisin in the Sun, The Tempest and several plays by August Wilson, including Fences (dir. Kenny Leon) and Ma Rainey’s Black Bottom (dir. Ruben Santiago-Hudson), both at The Greene Space. Jonathan is the winner of the 2015 National Society of Arts and Letters (NSAL) National Drama Competition.

Jonathan is repped by WME, Entertainment 360, Jackoway Austen and the Lede Company.

Stephanie March is an actor best known for her role as ADA Alex Cabot on TV’s hit series Law & Order SVU. She most recently played Lady Akira in Ava DuVernay and Jill Blankenship’s DC drama Naomi. In 2021, March starred in Lifetime’s “ripped from the headlines” original film A House on Fire. Ms. March has also appeared in Comedy Central’s A President Show Documentary, Adult Swim’s Neon Joe, 30 Rock, Happy Endings, Rescue Me, Grey’s Anatomy, Mr. & Mrs. Smith, The Treatment, Predisposed, and Innocence and has been seen onstage in the critically acclaimed revivals of Death of a Salesman, Talk Radio, and Boys’ Life.  In 2019, March made her debut as executive producer—as well as cast member—in the social media mockumentary, The Social Ones, which premiered at Cinequest Film and Creativity Festival in Silicon Valley and the Los Angeles Film Festival. The film went on to win Cinequest’s Award for Best Comedy Feature and was released wide on March 3, 2020.

March also devotes a considerable amount of time to her philanthropic and entrepreneurial endeavors. She is the co-founder of bespoke beauty brand, SHESPOKE. In addition to running her business, Ms. March is an investor in the restaurant SONA and legendary NYC watering hole, Temple Bar. She spends a significant amount of time traveling globally in her capacity as an activist for causes benefiting women and education. March serves on the boards of OneKid OneWorld and the National Advisory Council for the School of Communication at Northwestern University, and is a long-time advocate for Planned Parenthood Global. Ms. March is also on the board of World of Children and the recipient of WOCA’s 2016 Board of Governors’ Award. She is a graduate of Northwestern University and resides in NYC with her husband, Dan Benton, and her Maine Coon, Taco Cat.

Dee Poku-Spalding is an entrepreneur and women’s advocate born in the UK and raised between London and Accra. She is the founder and CEO of The WIE Suite, a private membership community and peer learning platform for women leaders, creators and innovators. Its mission is to redefine the way women achieve success for themselves and for their companies by providing the community and tools for them to excel at the highest levels. The WIE Suite also works with companies to accelerate growth by helping them attract, retain and grow diverse talent.

Back in 2010, Dee also co-founded The WIE Network, pioneering one of the early modern women’s conferences, in response to the lack of diversity at traditional business forums. And her initiative Black Women Raise works to accelerate the ability of leading black female founders to raise growth capital, scale up and create pathways for the women behind them. An innate community builder, Dee has attracted numerous business and cultural leaders to her platform over the years, from Queen Rania and Nancy Pelosi to Aurora James and Julie Wainwright (The Real Real).

Dee’s background includes senior marketing roles at Paramount Pictures (Head of International Marketing, Vantage) and Focus Features (Head of International Publicity). She began her career in brand marketing and communications and over the years has worked with renowned brands such as Coca Cola, Absolut Vodka, Crème de la Mer and London Fashion Week. Dee serves on the BAFTA Diversity and Inclusion Steering Group and is on the Board of Directors of the Brooklyn Bridge Park Conservancy. She was previously on the Credit Suisse New Markets Women’s Advisory Board and BAFTA NY’s Board of Directors. She is also an advisor to Girl Gaze, Paint Box, The Female Founders Collective and The Wonder and serves as a contributor to Forbes. Dee holds a Bachelor of Science degree in Math. She currently lives in Brooklyn with her husband and son.

Lisa Taback is a renowned entertainment strategic marketing and PR executive, best known for Oscar campaigns that include The Power of the Dog, Don’t Look Up, Roma, Ma Rainey’s Black Bottom, Marriage Story, La La Land, Moonlight, Spotlight, The King’s Speech, Lady Bird, Chicago and Shakespeare in Love, among many others.  She has also led numerous documentary film campaigns including the Academy Award winning features My Octopus Teacher, American Factory, Icarus, Amy, 20 Feet from Stardom, Fahrenheit 9/11 and White Helmets. In addition, she has also led successful Emmy campaigns for The Crown, Squid Game, Ozark, Stranger Things and This is Us.

Taback got her start at the legendary Miramax Films crafting campaigns for such iconic films as Pulp Fiction and Life Is Beautiful. After more than a decade owning her own company, she was hired by Netflix in 2018. Taback also produced Period. End of Sentence., which won Best Documentary Short Subject at the 2019 Academy® Awards, along with her daughter, Claire Sliney. She is a member of AMPAS, BAFTA and ATAS as well.