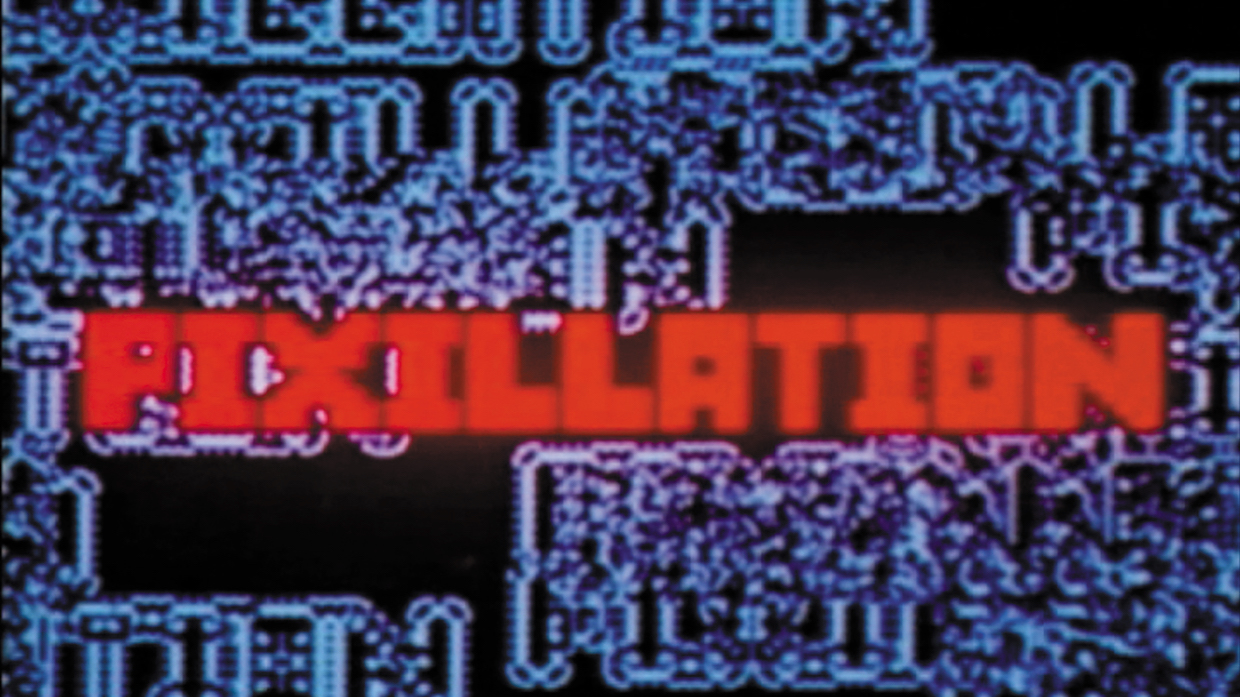 Lillian Schwartz's Pixillation (from the Collections of the Henry Ford)

“Animated movies are usually made by a slow and complex process involving the coordinated efforts of many artists, draftsmen, photographers and other specialists,” begins a curious instructional film Bell Telephone Laboratories Inc. released in 1964. After asserting that with an “electronic computer,” an animator could bypass “tedious” labor, the opening scroll concludes, “this very film was produced entirely by the process which is about to be described.” What follows is a concise and visually fascinating demonstration of BEFLIX (“Bell Flix”), one of the earliest computer animation techniques. Images in the demo—created with a “mosaic” grid of squares, each programmed to display light at a scale of intensity from zero to seven—mimic the appearance of a film projected at a low frame rate and the hand-drawn cels that animators use in analog productions. As the film continues, BEFLIX is assembled with a programming language—punch cards fed to a computer as instructions—transferred over magnetic tape, projected through a cathode-ray tube and captured by a camera.

It might sound like a “slow and complex process” compared to modern CGI, but BEFLIX is notable as the first foray into bitmap-based movie-making. The method and the instructional film explaining it, A Computer Technique for the Production of Animated Movies, were the work of Ken Knowlton, who passed away in June at the age of 91. As a pioneer of computer graphics and the pixel, Knowlton—a longtime researcher at Bell Labs—was also a key participant in groundbreaking collaborations between artists and engineers, including the Experiments in Art and Technology (E.A.T.). Projects he developed in collaboration with Lillian Schwartz, Stan VanDerBeek, Laurie Spiegel and others reveal the arbitrary line between invention and art-making.

For Knowlton, there was a best outcome of this kind of collaboration, when artists “begin to learn about computers and other technology.” “In the best cases,” he continued in a text published to his personal website, “they become their own programmers, getting the whole creative process into one head.” The engineers, meanwhile, “become more complete humans, in part from understanding that all behavior comes not from logic but, at the bottommost level, from intrinsically indefensible emotions, values and drives.” However, he added, classifications like artist and engineer are often fuzzy from the start. Leon Harmon, a scientist and collaborator of Knowlton’s, identified as an artist “by flip of the coin so we could enter art-and-technology collaboration shows.”

Speaking at a symposium on the history of Bell Labs with Knowlton and other alums in 1998, electronic music composer Laurie Spiegel called her time at the R&D center a “tremendous learning experience.” Spiegel first introduced herself to Knowlton after admiring visuals he made with Lillian Schwartz through a window to his office. There had been no arduous application process to get involved as an artist at the New Jersey corporate campus; Spiegel, like many artists, found out about the opportunity through friends. The atmosphere was “unlike any that I’ve really encountered in the arts,” Spiegel said. There were “scientists and engineers who loved music or loved art and didn’t have any vested ego interest in it. They just loved it. You had a very uncompetitive, mutually supportive, collaboration-friendly atmosphere where people were really proud of what each other did rather than feeling threatened by it.”

By the time Knowlton arrived in 1962, Bell Labs served a strategic purpose for AT&T that might explain some of the camaraderie that Spiegel described. The telephone company used Bell Labs as a bargaining chip to stave off antitrust legislation until the divestiture of the monopoly in the 1980s. In its 1956 consent decree with the U.S. government, the company agreed to measures including royalty-free licensing of its patents and that any business it conducted had to fall strictly within the field of telecommunications. Barred from entering other industries, including computer system manufacturing, Bell Labs became the place for Knowlton and others to engage in tinkering and artmaking with no immediate profit motive. Flush with cash and resources, but without the customary strings attached, researchers were given time to develop and room to fail.

Knowlton’s BEFLIX demonstration, and films he made in collaboration with VanDerBeek and Schwartz, were among the pieces exhibited this summer at the Computer History Museum show “Early Computer Films, 1963–1972.” Documentation for the show emphasizes that collaboration of this sort was a matter of practicality to the artists. The old mainframes in use at the time were room-sized and cost millions of dollars—no artist could afford to work alone. The purpose of these gargantuan machines was also unclear at the time, which is why the engineers turned to artists for their vision. Computers up to that point had been primarily used for advanced calculations like tracking ballistic trajectories or space flight operations, but at Bell Labs, researchers and artists experimented with sound (including the synthetic voice programmed by Max Mathews to sing “Daisy Bell” in 1961, replicated for 2001: A Space Odyssey) and graphical capability.

While contemporary projects engaging with the blockchain or developed for virtual reality and the “metaverse” make a mad dash for the marketplace—realizing an art market before there is much of an art to speak of—what might now be considered computer art had a long gestation period at Bell Labs. Work that looks accomplished, in retrospect, often happened at least partly by accident, including a series of vibrant, op-art and tapestry-inspired animations called Poem Fields that Knowlton developed with experimental filmmaker Stan VanDerBeek beginning in 1965. BEFLIX produced black-and-white that could be colorized afterward, and this is where artist Lillian Schwartz shined in her collaborations with Knowlton. In Pixillation (1970), computer-generated images in brilliant colors appear like punctuation between analog sequences. In their collaboration UFOs (1971), Schwartz and Knowlton reveled in the limitations of the “mosaic,” producing un-smooth animated flying saucer-like curves—including their names in cursive script—and spherical shapes superimposing a technicolor eclipse.

In The Incredible Machine, a short film produced by Bell Labs in 1968, VanDerBeek and Knowlton are captured arguing over how much of the images produced with BEFLIX came down to guesswork. “You don’t know what it’s exactly going to do,” VanDerBeek says. Knowlton counters that because a programming language operates as a set of instructions, “in a sense, the computer has done exactly what you told it to do.” It sounds like VanDerBeek was asking for what we’d now call a WYSIWYG (What You See Is What You Get) interface. This congenial debate also offers a poignant glimpse of Knowlton as a collaborator.

Whether BEFLIX needed a more user-friendly interface was just one question these experiments at Bell Labs opened up. The success of Knowlton’s collaborations with artists began with embracing the slow, often clumsy process of fooling around with technology before there was a prescribed path of use—pushing the boundaries of what can be considered art, what tools can be used to produce it and the ideas that blossom when experimentation, rather than profit, drives artistic pursuits with technology.