What Do You Do With a Donkey? On Jerzy Skolimowski’s EO 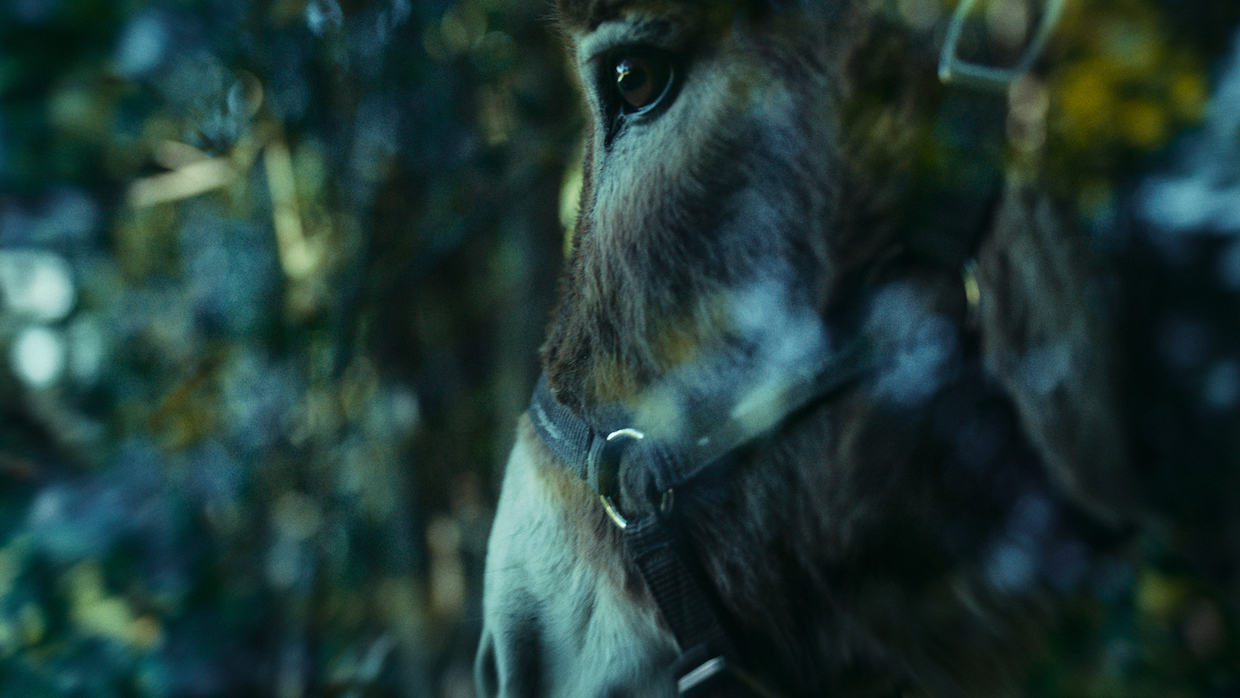 Although the film production process has had to undergo huge changes since the default adoption of digital media, most movies still look like their analog predecessors in both style—directors frequently process digital files to mimic the look of celluloid—and narrative: beginning, middle and end. But, although we are looking down the barrel of the afterlife of cinema, to embrace digital media at this moment only means making movies explicitly about, or attempting to look of, the Internet. It takes a New Wave-adjacent filmmaker to “explode the frame” for us once again with organically reconsidered digital techniques.

Billed as a contemporary interpretation of Bresson’s Au Hasard Balthazar, Jerzy Skolimowski’s follows the titular donkey from his beginnings in a Polish circus act with loving caretaker Kasandra (Sandra Drzymalska) through the end of his life after cycling through a number of different owners and professions. Eo is removed from Kasandra’s care early in the film at the behest of an animal rights law stipulating that animals cannot be used in circus performances, which becomes ironic as the film progresses and the conditions of Eo’s life are, at best, a little bit worse, and grisly at worst. The majority of the film assumes Eo’s embodied view of the world—characters drop off without ceremony or appear randomly, based on their proximity to the donkey. In a literal sense, we are often confronted with Eo’s head spanning the frame, dwarfing the rest of his body and immediate surroundings, which is what I imagine being a donkey is like. Just like Balthazar, the effect is of suggestion of empathy—as viewers, we animate Eo with our own emotions by anthropomorphizing his gestures. That Eo runs after Kasandra when she visits him after their parting, that he kicks a mean fur farmer (the film’s only bona-fide villain) in the guts to stop him from electrocuting more foxes—we translate these actions into a personality and love Eo for it.

While it would normally follow that this is a classic example of a movie about animal rights and subjectivity like Balthazar, this is not a movie about animal rights and EO is not Balthazar. Balthazar lives in the canon as an exemplary meditation on questions of self-determination and control during the accelerating mechanization of French agriculture but, for modern viewers, it goes without saying that a donkey has been outrun by machines, rendering the animal more or less useless as far as productivity goes. Eo has no control over his life while various owners struggle to find creative uses for him. As far as narrative goes, Eo’s purpose is simply to be a liability, or novelty accessory, to someone else. In one of the film’s more memorable chapters, Eo escapes from the petting farm that he has been deployed to and gets picked up by animal control, who seem to be on their way to play in a local soccer game. The fact that they have a newly acquired donkey does not stop them from playing in the match, then celebrating with their new mascot in a seedy club afterwards.

The question for Eo’s filmmaker: What to do with a living thing after its functional use has been rendered obsolete? Skolimowski’s answer is delightful and off-putting, pensive but never boring. The Polish director himself has said that the main criteria for his own work is to 1. be aesthetic and 2. not boring. While contemporary filmmakers still struggle to embrace new media forms (like digital video) without applying the same constrictions that traditional film required, Skolimowski embraces the freedom that digital media allows without slipping into hyperbole. EO weaves between impossibly, unnaturally sharp images and fragmented strobing, as though we were in a nightclub or looking down the nose of a microscope. There are moments of soft, old-timey vignetting, but the effect is less filmic than uncanny and incongruously pristine. At other times, Skolimowski departs from his standard subjective/claustrophobic framing of Eo’s head and body, zooming all the way out and providing us with data—well, wide-angle footage—that overwhelms us. There is no focus in these drone shots because everything is in focus. We don’t have enough time to properly scan it and our visual processors glitch. Meanwhile, the film’s unceasing soundtrack relies on classical instrumentation but is often cut through with sounds from computers. At a certain point, the distinction between organic sounds and computer-generated ones dissolves, which feels discordant until you realize that they’re all processed through the same machinery anyway. The orchestra becomes a machine and the computer becomes an instrument, and only our processing faculties differentiate the two.

On the whole, the questions we ask of Eo throughout the film—mainly, what to do with him all day—are not so far off from the question we might want to consider asking ourselves: what to do with the increasingly obsolescent form of the traditional cinema format. Is the arthouse film itself a thing of the past? Skolimowski doesn’t seem to think so. Indeed, the best times of Eo’s life are couched in the joyful prologue, when he is a mere circus entertainer with a beautiful woman looking after him. Everyone’s favorite exaggeration about technology is that it won’t be long before we are just brains in bottles, feeding on entertainment and experience without really requiring our bodies for anything else. The senses become everything. But right now, we have our clumsy oversized bodies and the need to do something real with them while we are alive. In the same way that Eo doesn’t roll over to the condition of being a donkey in 2022, EO speaks to a world in which your hardware is too slow for the tasks that you were born to do, but you do them regardless. The afterlife of cinema lies in the idiosyncrasies of life, the insistence on slowing down and looking again.