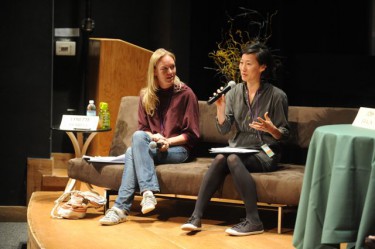 Here is the first of two filmmaker reports filed from the just-finished Sundance Producer’s Lab. Reporting back here is Amy Lo.


The Sundance Lab was my rehab. In the most transformative, astonishing way.

Here we are, Day One, four fellow Fellows and me gathered up from parts east, west and south, hurtling up the hill, forward-pressing and fueled by anxious hope.

We come to a sudden stop, a moment to inhale and exhale. High-elevation, low-oxygen. Rising disorientation.

I came to this mountain with a script I love called Americano (a working title) written and to be directed by Jesus Beltran, a fantastic, impressive human being and talented emerging filmmaker.

It’s the story of a rebellious immigrant from Mexico after fifteen years living in the US illegally, whose faith in the American dream is tested when he falls for an older, white woman working at the local grocery.

An unexpected take on the traditional immigrant narrative, Americano is not a border-crossing tale, nor a sob story. It’s a distinctively human look at complex relationships and bold, very real characters.

Before the Labs, we’d worked the project with silent diligence and assiduous care, keeping our cards close to the chest during our fragile state of adolescence. We knew where we wanted to end up but were grasping our way forward. Lurching growth spurts, awkward questions and all.

The Labs forced it all out – all of it and all at once — but within a cocoon of safety spun around us with dizzying swiftness as we Fellows stood at the focal point, temporarily blinking with bewilderment and curiosity before leaping in to stuff ourselves silly at the all-you-can-eat buffet of wisdom and insight.

Each Advisor had read the entirety of our scripts, materials, and personal statements before arriving. They came prepared not just with a cursory understanding of what we were facing, but with deeply considered ideas specific to our project’s needs.

Much of the day saw the baker’s dozen of us — five Fellows outnumbered by our dream team squad of Advisors — sitting around the table fortified by black coffee, snack food, blank pieces of paper, and open, attentive minds. It was a collective brain trust directed at each of us in turn.

We could ask them anything, and answers would come back with unhesitating candor and explicit detail. It was bracing, this instant trust, the unveiling of hidden battle scars and wounds of films past. All this demystification in the service of making us better, and making our films even better.

For someone who has inadvertently gone it alone for much of my so-called career, I would at times feel crushing gratitude for these mentors and their belief in us.

It’s a more-than-twelve-step recovery program, but I think we’re off to a good start.

My name is Amy Lo. And I’m an independent producer. — Amy Lo

Through her production banner Mental Pictures, Amy Lo develops and produces feature films, documentaries and new media, focused on director-driven original stories with international appeal. Current projects run the gamut from Dreaming Nicaragua, a vérité documentary produced in association with Arts Engine; to a narrative adaptation of Planet B-boy set up at Sony Pictures’ Screen Gems. She can also be found on twitter @amy_lo.

The participants at this year’s Sundance Producers Labs were: