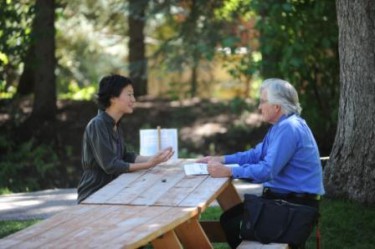 Back in New York, a director I’d just met the other day told me, “You’re really nice for a producer.”

Have we sunk so low? He was surprised that I was…nice?

In fact, at the Sundance Creative Producing Summit, there was nothing but niceness all around. It began on Friday; specifically, after lunch. Pre-lunch, we were still ensconced in our intimate, small-group sessions for the Feature Film Creative Producing Lab, which had started five days prior.

The Summit, in its second year, would be three more days on the mountain, but instead of us five Fellows being the center of attention, there would be a broader agenda examining the state of the independent film industry with 40 some-odd folks.

We had been spoiled at the Labs, and now we were gently being pushed out of the nest. My fellow Fellows and I marked the occasion with a chairlift ride up Mount Timpanogos (our one and only hour of free time the entire week!). And then we morphed into our presentable Summit selves. No more oversharing; time to face the outside world.

Shifting into more macro-level discussions on (what else?) distribution, we get a blow-by-blow account of how Winter’s Bone found its home after premiering at Sundance, told tag-team-style from both sides of the table: sales agent Josh Braun and eventual distributor Eric D’Arbeloff. Nice to hear a happy ending for such a deserving film.

Exit Through the Gift Shop is the next case study — with first-time distributor/many-time sales agent John Sloss and release partner Ted Mundorff, the Landmark Theatres CEO. I’m glad Ted’s at the Summit, since exhibitors always seem to be the missing piece at these confabs.

But I don’t really get a straight answer to the question I pose: why don’t we see more experiments where exhibitors get a piece of back-end from DVD, pay TV, and ancillary, so they have more interest in the long-term life of a film? Maybe then theaters wouldn’t be so quick to yank an indie film? Or be so averse to collapsing windows? Richard Linklater’s film tried it in the UK, but who’s next?

Break for dinner. Isn’t that Reed Hastings by the salad bar?

At the evening presentation, Ted Sarandos says, “Stoners love the Netflix.” And you know all your filmmaker friends who beg you to add their unreleased DVD to the “Saved” section of your queue? Turns out it works. Netflix starts placing orders at a few hundred requests, in case you were wondering.

We’re up early, and even our breakfast tables have efficiently assigned topics for discussion. At 8AM, my group is primed to talk day and date releasing. Do any filmmakers really make money off this? Arianna Bocco from IFC stresses that VOD is not a cure-all, but just another revenue stream. Also, there’s incredible industry pressure for distributors to publish VOD numbers like they do box office, but apparently, it’s Comcast who blocks reporting.

Next, another pair of panels, “Financing 101” and “Creative Financing.” Lynette Howell dazzles with the deal-making gymnastics employed to make possible On the Ice, a dramatic thriller shot in Barrow, Alaska by a first-time director featuring an all-non-professional Inupiat cast. There’s hope after all.

Fast forward through one-on-one meetings (six quickies at 15 minutes each), then lunch (more “Hosted Tables” on assorted subjects), and three more presentations…. Meanwhile, I’m a little nervous looking ahead on the schedule to the marketing and distribution “ThinkTank”, a first at the Summit.

I’m slated to present my project that has just gone through the Labs, a narrative feature with the working title Americano by writer/director Jesus Beltran. I’d heard a rumor that panelists would be asked to come in with concrete numbers and comps for my film. That doesn’t exactly happen, but the feedback is constructive nonetheless — with some varying opinions, which are useful to hear threshed out.

Even more heartening is the aftermath, with others approaching me with words of encouragement, offers of introduction, ideas I had never thought of. It happens in between and around and after the scheduled stuff, in line for dessert, waiting for the shuttle, walking to the Owl Bar. 7:30am to midnight all day, every day. It’s overwhelming.

Another breakfast, another roundtable, with filmmaker Josh Radnor telling us how he learned to direct his film by casting it. Throughout the auditions, he tried different ways of communicating with actors and gauged what worked and what didn’t, crucial learning for a first-time director.

On to breakout sessions, to reclaim the “P” word: pitching. It’s the first time some of us have been forced to talk about our films publicly, so it’s all about finding the best way to enter those conversations. Less about plot, more about the essence of your film. Also remember whomever you’re talking to will likely have to re-pitch it to someone else, so you have to give them something they can grab on to and make their own. The passion behind the seven films in my group is so evident, and I can’t wait to see them finished!

At the wrap up, we come together one last time. One of the greatest things about the Summit is the intersection of documentary and narrative filmmakers finally getting a chance to mix it up. Sundance has created a space to build community amongst producers, and there’s a pervasive spirit of generosity that we all want to preserve and share with others once we go home.

Veteran producer Ron Yerxa may have said it best, likening the weekend experience to taking some powerful, organic, slow-release psychadelic drug that sustained our collective hope and desire and kinship as producers throughout our three days together on the mountain.

He gave me a high-five on the way out. What a nice guy. — Amy Lo