Nicholas Rombes Goes Into the Splice 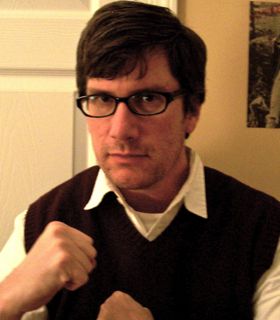 If you remember my interview with Nicholas Rombes about his “10/40/70” series at The Rumpus a while back, you’ll know that I am a big fan of his original approach to film writing. Over at The Rumpus he looks at film through a deliberately tightened lens — examining a movie by only considering the scenes occurring at the 10, 40 and 70 marks. So, I was thrilled when Nicholas (pictured) subsequently proposed a new column for Filmmaker. It’s called “Into the Splice,” and it debuts today. (And, no, it’s not about editing.) In this series, Nicholas writes about the pleasures of moviegoing, and, more specifically, how personal meanings are created by the experience of seeing movies in theaters. The movie itself, the people around you, the theater, what else happened that day, what you were thinking about when you bought a ticket — all of these things create the memories we have of a specific film, but this extra-textual material is precisely the sort that critics excise from their reviews. This column takes the opposite approach as Nicholas goes into the films but also himself to figure what they mean to him. In the process, he reminds us of why we love to go to the movies.

Along with some other design tweaks — our pages are wider now, for one — the column is up now. Other new columns will join it in the coming weeks. Nicholas’s first film is Jean-Pierre Jeunet’s Micmacs, and here’s how he opens:

The late afternoon is warm, the locusts screaming from the trees. The sun makes everything as golden as the poster for Micmacs, a movie that I’ve avoided because the spell of Jean-Pierre Jeunet’s earlier movies (Delicatessen, The City of Lost Children, and Amélie especially) is so powerful and magical. I didn’t want Micmacs to break that spell, but I needn’t have worried. Some reviews have accused the film of being style over substance but really, when it comes to any form of storytelling—in movies, in literature, in art—is there a difference? Usually when critics accuse a movie or novel of being too stylish or too surface-y or too full of visual or narrative tricks what they mean is that they wish it were more realistic. But “realism” is as much a stylistic choice in narrative cinema as is surrealism, or any other aesthetic that’s not realistic. A movie like Winter’s Bone is praised as being realistic, but its vision of reality is as staged as Knight and Day.

I’m really happy Nicholas is writing here and I hope you check out this column and future ones in the weeks ahead. And for more on Nicholas, visit him at his blog here.