“MARWENCOL” OPENS STRANGER THAN FICTION AT THE IFC CENTER 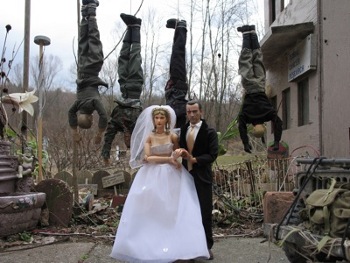 “Stranger than Fiction,” the annual documentary series at the IFC Center, opens tonight with Jeff Malmberg’s Marwencol, winner of the Best Documentary award at SXSW, Comic-Con and SIFF.

On April 8, 2000, Mark Hogancamp was attacked outside of a bar in Kingston, NY, by five men who beat him literally to death. Revived by paramedics, Mark had suffered brain damage and physical injuries so severe even his own mother didn’t recognize him. After nine days in a coma and 40 days in the hospital, Mark was discharged with little memory of his previous life.

Unable to afford therapy, Mark decided to create his own. In his backyard, he built Marwencol, a 1/6th scale World War II-era town that he populated with dolls representing his friends, family and even his attackers. He used the small dolls and props to redevelop his hand-eye coordination, while he dealt with the psychic wounds from his attack through the town’s many battles and dramas.

After a few years, Mark started documenting his miniature dramas with his camera. Through Mark’s lens, these were no longer dolls – they were living, breathing characters in an epic WWII story full of violence, jealousy, longing and revenge. And he (or rather his alter ego, Captain Hogancamp) was the hero.

When Mark’s stunningly realistic photos are discovered and published in an art magazine, his homemade therapy suddenly becomes “art,” forcing Mark to make a choice between the safety of his fictional town and the real world he’s avoided since his attack.

Shot over the course of four years, Jeff Malmberg’s documentary intertwines the dual realities of Mark Hogancamp to tell the whole story of Marwencol – a surprising tale of love, secrets, pain, and adventure.

Filmmaker: Well that’s what’s so interesting about Marwencol itself is that it’s this very private therapeutic tool, but it’s also a way for him to communicate with other people – by putting them into the town as characters.

Malmberg: Yeah, absolutely, I think he enjoys the feedback of people saying, “Oh, what have I been doing in my town lately?” “Oh, you went on a raid with me,” and they’re like, “Wow, that’s cool.” I’ve noticed if somebody tries to suggest things to Mark — like what’s wrong with their character or what their character should be doing – almost immediately that character will be taken down by the SS. [laughs] So it’s like, I’m in the town too, but I know the rules. It’s his world.

It’s also about control, too, you know — he can control this world. I’m realizing more and more how essential it must be to him, because he was an illustrator, [and he lost that ability.]. So he really takes pride when people go, “Oh that looks just like me!” or “Yeah, I totally would do that!” It’s not a joke, it means so much to him. Because he’s trying to represent life in there, or find art in there, you know what I mean? I know he doesn’t think of himself in that way, but he really is an artist.

Tickets for tonight’s 8PM screening can be purchased here.