“ZENITH” AND SHOCKS TO THE SYSTEM 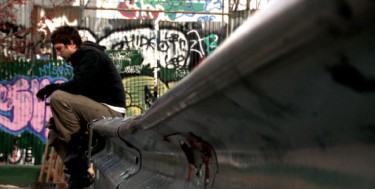 Directed by Anonymous (or, maybe, “experiment supervisor” Vladan Nikolic), Zenith is described as a “paranoid sci-fi found object from the future,” and it’s inspired by the notorious Milgram experiment, a real psychology experiment exploring man’s potential for both acquiescence to authority and cruelty.

“The film they don’t want you to see,” by “Anonymous,” shouts the teaser, prefaced by warnings of legal threats and “illegal” images. Zenith comes off at first blush as merely a spurt of faux-transgression looking for rubberneckers. But it’s actually a densely written, sparsely filmed dystopia, using the wasteyards and warehouses of Brooklyn and Queens as the city of a wasted future, when people have been genetically fine-tuned for “happiness,” leaving everyone numb and scrambling after painful-bad-side-effect pharmaceuticals just so they can feel something…. Nikolic’s lust for paranoid desperation is powerful, and his way with actors is stunningly graceful.

Having had full houses last week, the film is screening again this weekend at midnight (actually, 12:25AM) at New York’s IFC Center and then will be released “experimentally” in other cities around the country in the coming months. (On the film’s website, you can, a la Paranormal Activity, request the film come to your city.) From their website, here is “Tape 6,” which details the Milgram experiment and gives you a taste of the film.

Tape 6 from Surla Films on Vimeo.