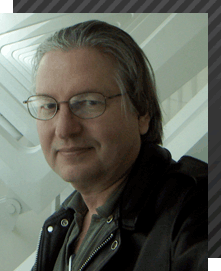 Characteristically witty and provocative, sometimes curmudgeonly so, author Bruce Sterling closed out this weekend’s Vimeo Festival in New York City with a 50-minute talk titled “Vernacular Video” that began by asking, “Why is Andrea Allen funny?” (Here I will confess that I didn’t know who Andrea Allen is. If you’re like me, I will point you to her Vimeo page and quote Sterling, who called her a “perky, approachable and outgoing 20-something person” who can sometimes look “pensive and deep.” More to the point, she is the Community Manager at Vimeo who started as a user, just like you and me, but became staff and now has a large fanbase for her 200+ short semi-comedic videos revolving around life at Vimeo.)

After dissecting the roots of Allen’s appeal, Sterling went on to a more challenging related question: what will the Andrea Arnold of 2035 look like? For the answer, he started by quoting futurist Paul Saffo, who said that to chart X number of years into the future you have to go back 2X years into the past. Which means that to think about the Andrea Allen of 2035 we need to look at the Andrea Allen of 1960… who was Mary Tyler Moore. An entertaining history of the The Dick Van Dyke Show (an old favorite, I’ll admit) followed, with Sterling pointing out that the show, created by a real comedy show writer (Carl Reiner) about a fictitious comedy show writer, Rob Petrie (Dick Van Dyke), and his Capri-pants-wearing wife Laura (Moore), was as self-reflexive for its day as Allen’s unscripted, off-the-cuff, behind-the-scenes vignettes of life at Vimeo are for ours. Like Petrie — a straitlaced suburbanite who, as Sterling pointed out, was nothing at all like real TV comedy writers of the day — Allen is “an aspirational figure” who personifies the occupational desires of her audience. Understanding why Allen’s videos “work” and what her significance might be requires asking what has changed since the time of The Dick Van Dyke show. The answer, of course, is a lot. Online video isn’t organized around the half-hour show, it’s not predicated on the conception of “mass audience” that existed in the ’50s, and it practically requires for its stars people who are not actors and actresses and who quite visibly don’t “act.” After a hilarious bit in which Sterling showed how the concept of our future would have been unimaginable to the makers of The Dick Van Dyke Show, Sterling ended this segment of the talk by noting the sitcom was sponsored by Kent cigarettes, a product that in those 50 years has killed a lot of its viewership. “What is the ‘Kent cigarettes’ of Vimeo?” Sterling asked. “I don’t know what it is, but I know it’s there.” 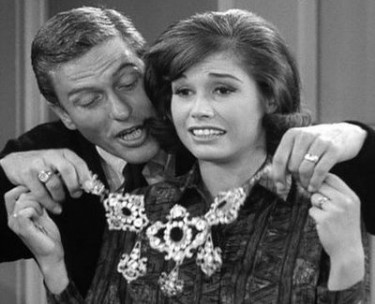 In the second part, after a funny riff comparing The Dick Van Dyke Show of Vimeo to the I Love Lucy of YouTube, Sterling posed the question of “upgrading our vernacular,” or, “how do you get classy and grown-up when you have too many gadgets?” Simplified further, how do we grow this unruly medium of “online video” into something approaching art? The plight of much of our current generation of creators is what he dubbed “obsolete before plateau” — the concept that creative technological tools become outdated before their user base is able to attain the proficiency to do something great with them. “How many ‘subversive video revolutions have you had,” he sarcastically asked the audience. “Those who live by disruptive disintermediation will die by it.” He urged the forward-thinking in the crowd to critically think, “What would make you obsolete,” noting, “You are not bullet proof or smart like you think you are.”

Sterling closed with some thoughts on the future of media in 2035, a world that will require makers to understand “the cultural logic of a networked society.” After noting three hard-to-refute maxims of the future ( 1. the median age will be older; 2. climate change will alter our physical environment; 3. there will be increasing urbanization — hence, old people living in hot cities), he asked, what happens to media? The answer is that media then will not look like the media of today. He described an “augmented, always-on, geolocative” media in which what to watch — and make — becomes a “computational problem” as a nexus of absorptive capture devices and advanced special effects technology is able to render for us just about anything we want to see. Surfing becomes enmeshed with desire and psychology. There is no longer a camera, just the cloud and computation.

Sterling ended with nods to a number of future thinkers, whose names I’ll try to repost here once I get them accurately. And because my hastily scribbled notes aren’t really capturing the mixture of astute media theory, exciting futurist thought, and whistling-past-the-graveyard humor of his talk, I’ll be looking for the video and will post it here when/if it is uploaded.

(For notes on the panel discussion by Ted Hope and Brian Newman right before Sterling’s talk, visit Koo’s No Film School.)