by Mary Anderson Casavant
in Filmmaking
on Nov 1, 2010 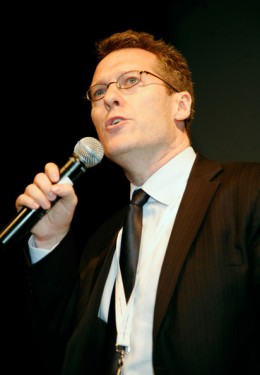 For most curators, programming the Toronto Film Festival would be a full plate, but Thom Powers’ appetite for documentary knows no bounds. In between programming and promoting Stranger than Fiction, his weekly documentary series at the IFC, he and Raphaela Neihausen, his wife and business partner, have co-founded DOC NYC, a New York based documentary festival.

It’s a festival of riches for documentary lovers — five days of documentary screenings, panels and stars (Werner Herzog and Errol Morris will be in attendance). A celebration of documentary media of all kinds, in addition to the many screenings there are also panels on the current state of radio and interviews with photographers. I spoke to Powers this weekend to find out more about the festival. For a full schedule of all events from November 3rd – November 9th, click here.

Filmmaker: What spurred you to create a new documentary festival in New York?

Powers: It spins out of our experience of doing Stranger than Fiction for five years and seeing what a great community has built up around it. One thing that I’ll be quick to acknowledge is that New York has many great showcases for documentaries, including the Margaret Mead Festival and MoMA’s doc fortnights. We thought there was room for a sort of fresh approach to curating a festival and that it was an opportunity to muster extra resources through partnerships we’ve made with places like New York University and New York Magazine.

Filmmaker: Is there any crossover between this festival and Toronto?

Powers: I think any fall festival looks to what Toronto is premiering because it’s long been a showcase of some of the most interesting work of the year. Some of the crossover has more to do with it just being “Toronto” than the role I play. 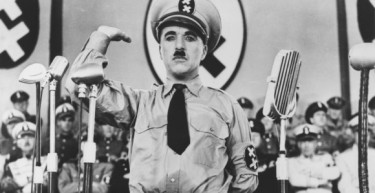 THE TRAMP AND THE DICTATOR, dir. by Kevin Brownlow

Powers: Kevin Brownlow is a major figure among film historians for his groundbreaking books and films. His book The Parade’s Gone By is the major work on silent cinema. His documentaries, several of which are being showcased, are classic works that helped us gain insight into cinema past. He is receiving an honorary Oscar along with Jean-Luc Godard and Francis Ford Coppola, so we thought it was too great an opportunity to pass up, since Brownlow who is seventy-two and based in London was coming to the United States.

Filmmaker: There are two competitions, the Viewfinders Competition and the Metropolis Competition. Why these two categories?

Powers: When you’re showing 44 films and events, it’s important to create frameworks so the audience has a little bit of a guide…The Viewfinders section is meant to showcase stories from around the world, and one thing I think that’s significant is that each of these films has a real distinctive voice. There’s nothing that feels like the work of another director. The Metropolis Category was created because there are so many great stories about New York. Every year as a programmer at Toronto, I have to make choices between too many great New York films, so this is an opportunity to supply a showcase.

Filmmaker: Are there any films you’d like to highlight?

Powers: If you don’t know who Kevin Brownlow is, get yourself to the IFC Center on Monday or Tuesday to remedy that. Another I would highlight because it comes from overseas and is making its U.S. premiere is Discoveries of a Marionette which draws on gorgeous Super 8 shot by the director’s grandfather. It reminds me of the films of Doug Block and Alan Berliner.

Filmmaker: I noticed several radio panels in the schedule.

Powers: We have this event called “The Medium Formerly Known as Radio,” which reflects how much work is being done on podcast now. Dean Olsher, creator of The Next Big Thing on PRI, is going to be showcasing some of his favorite works with Joe Richman of Radio Diaries. I think this is an effort to bring together the worlds of documentary practitioners within radio and film. Until now, they’ve mostly been kind of segmented.

Filmmaker: One of my favorite screenings at Stranger than Fiction has always been the Orphan Film Symposium, which features neglected moving images, such as home movies. I was very happy to see it included.

Powers: To me, they are some of the more unique things you can experience. It’s a film going experience that you can’t ever duplicate. You’ll never be able to download it on Netflix. If you haven’t experienced it, you are really missing out.

Filmmaker: There have been a number of documentaries about energy issues this year, including several that were included at Stranger Than Fiction. Why did you pick Windfall for DOC NYC?

Powers: Energy has become a subgenre of documentary films. It reflects the degree to which our planet is consuming energy at a more rapid pace than anytime in its history. There were at least three documentaries at Toronto this year that related to energy, Windfall being one of them. I selected Windfall for DOC NYC because of its upstate New York locale.

Powers: We’ve tried to keep tickets at a fairly reasonable level. Ticket prices are the same as at Stranger Than Fiction, $16. For IFC members, it’s $13. If you want to go whole hog, there’s something called the Waverly pass for $500. On Wednesday, we have a free state of the industry panel at 5. You can’t get better than free.

Filmmaker: There are sort of two kind of festivals, “discovery fests” where films premiere and find distributors (Sundance, Toronto, etc.) and another that is mostly a showcase of work that debuted at other festivals and where the films mostly have distribution (the New York Film Festival, for example). Into which category does DOC NYC fall?

Powers: The phenomenon of films being sold out of festivals is undergoing a transformation even at festivals like Sundance and Toronto where more deals take place after the festival than during the festival. Also there’s an increasing trend for filmmakers to take more of distribution into their own hands and to sell films through iTunes and DVDs on their website. So I think it’s hard to judge in this period of transformation what a festival can do as a platform. What a festival can do that is always going to be beneficial is to make enough noise about those films through publicity, awards, etc and that’s what we’re setting out to do now.