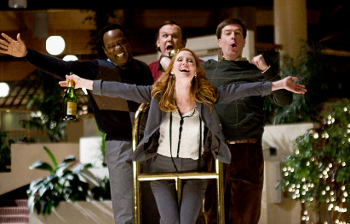 The biggest and most exciting surprise about making Cedar Rapids was how beautifully our well-known cast blended in with our lesser-known cast. The film is about the unlikely friendship between four insurance agents at an annual convention. Three of the actors are well-known to the public — Ed Helms, John C. Reilly and Anne Heche — and the fourth is an amazing character actor from New York, Isiah Whitlock Jr. Although Isiah is known for his great performance as Senator Clay Davis in the TV series The Wire and his theater work with David Mamet, he was the surprise factor for our audience. We needed to make people really believe that these were regular insurance folks form the Midwest. I had hoped that Isiah’s presence would ground the familiarity of Ed, John and Anne and allow the audience to accept the premise of this tiny convention in Cedar Rapids more easily. One can hope for such chemistry, and you cast with your best hunch that an intangible magic will coalesce the ensemble of your cast, but it does not always happen and rarely as wonderfully as it did here! The four became a motley crew that had a joyous jolt of energy beyond the sum of all the parts. They felt like real people meeting and falling in love with each other for the first time. You simply believe them together. On the set, Isiah thrilled Ed, John and Anne each day. He brought something to the table that felt so real and fresh, we all were superenergized by it. In turn, he was so thrilled to be acting with such charismatic actors and to be one among these great leads, that his excitement had a contagious, escalating effect for the whole cast and crew. When such vitality results form the chemistry of your cast, it’s truly a dream come true. I can’t wait for the world to see them together on screen.

Sam Fuller, the great B-movie director, once told me to make sure you cast “on hunch.” He said, “Cast your neighbor or cast the biggest movie star in the world, but CAST ON HUNCH!” He’s right. We should never use our intellects when casting; it’s purely from the gut. I’m much indebted to him. That is the best guidance a director can get as we roll the casting dice and hope for magic.