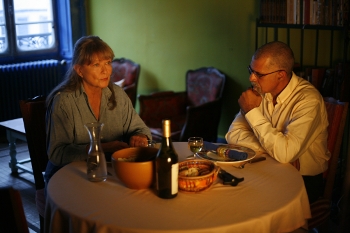 We had decided to shoot in a small town located in the Jura (a mountainous area), which would generate lodging problems for the technical team and for actors.

The town hall and the inhabitants were really eager to welcome this shooting and had done everything to make our arrival possible. We found ourselves lodged in the former premises of a prestigious French bank, disused but yet sumptuous.

We had at our disposal a significant place which allowed the technical and arts teams to live together during the four-week shoot.

Villagers proposed to cook meals for the whole team and were hired. The technicians and the actors were cherished and coddled and the lack of hotel rooms — and our limited financial means — provoked very special shooting conditions which largely contributed to generate a fantastic solidarity within the team as well as within the population. Moreover, we managed to use some rooms of that former bank as shooting locations!

The unexpected support of that village population and all the means implemented by each one to allow the shoot to take place determined the feasibility of the project. The investment of each one so that the project could become real was an additional determination for me to take that project the highest and the farthest possible — up to Sundance!