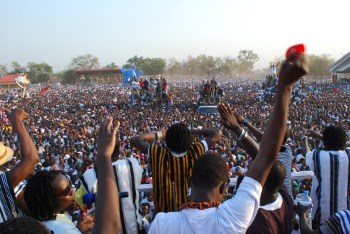 The biggest puzzle to me was that the majority of Black Africa was celebrating 50 years of independence when we had the idea for the film An African Election and that nobody saw the potential of looking into where Africa stood after 50 years of its rebirth. The project was brushed aside as being interesting but unrealistic. Meanwhile people were talking about the silver bullet and all the failures associated with the Dark Continent. Nobody wanted to invest, and even cultural institutions whose mission statements were to preserve and cultivate democracy in Africa denied us financial aid. You scratch your head and then move on. But surprisingly enough, the audiences who saw the film never let us down; they got it. Not many people have seen the film to date, but the majority thought that we showed them a new and inspiring Africa, regardless of all the challenges the continent faces. You cannot take democracy for granted and we too often forget that.