“ALL YOUR DEAD ONES” | co-writer-director, Carlos Moreno

All Your Dead Ones, Carlos Moreno, Sundance Film Festival 2011 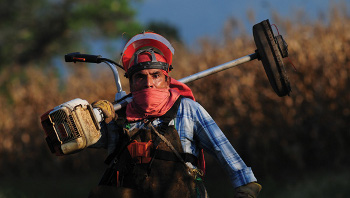 I believe that All Your Dead Ones is actually built upon surprise. It is a project that we decided to undertake with a very reduced production team and that meant that surprises would abound and appear around every corner: for instance, the weather conditions are very variable in the region where we shot the movie and this complicated even further our challenge of using only natural light right at the moment were the sun is completely perpendicular. Every day we were forced to expect the climatic surprise of the day, especially at the precise time for shooting. Several times we were surprised by the rain, but also by the generous and beautiful light of several dawns and dusks.

On a different note, the actors’ preparation, even as intense as it was during rehearsals, left an open road for surprise — for that spontaneous contribution at the moment when the camera rolls. The heat, the mosquitoes, the discomfort were going to add a new ingredient to the acting which would surprise us all, and indeed it did; it was the tension and stupor in which the story of the movie is based. The art director and I decided to search for locations that would already have all the elements and props instead of placing them unnaturally there. It was surprising the amount of options that we found for filming, but what really surprised us is the lopsided, urban and bourgeois vision that we had of the rural universe and the Colombian peasant.

However, the most important surprises are yet to come; I hope that All Your Dead Ones becomes a politically uncomfortable movie in our country that touches the wound of our social indolence and takes by surprise our society which deserves to wake up from its most conservative and hypocritical time.