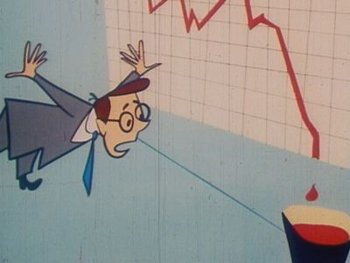 If I am completely honest, I would say that the biggest surprise was getting into competition at Sundance! I took on The Flaw because it seemed like a really difficult project to pull off. The brief was to make a film about the fundamental underlying cause of the present economic crisis. The first problem was therefore to identify what that was, to get beyond the stories of Wall Street shenanigans (which were obviously a big part of what went wrong, but equally clearly not the whole story, since greed and stupidity are not 21st-century inventions) to the deeper forces (mis)shaping American capitalism.

In fact, I was not too worried about the content because I have discovered from experience that the process of making a documentary film — the months of research and thought, the privileged access (in this case to everyone from distressed homeowners to Wall Street insiders to the world’s leading economists), and above all the pressing necessity to discover a narrative — somehow forces you to put the pieces of the jigsaw puzzle together in a new and interesting way. So I am confident that we have something new and important to say about what’s happened to the U.S. economy.

But how to turn a piece of economic analysis into a movie? That was what took months in the edit with the masterful David Fairhead. Rule one: try to make it funny; and in this we were greatly helped by the treasure trove of 1950s cartoons extolling the capitalist system discovered by our brilliant archive producer Jacqui Edwards, and a Kurt Weill-inspired score from my favorite composer, Philip Sheppard. The result is a very unusual film, and to be frank I still don’t know whether it really works, which is why the Sundance invitation was a pleasant surprise. I have a feeling the audience reaction will be another surprise, but nice or nasty — that I don’t know!