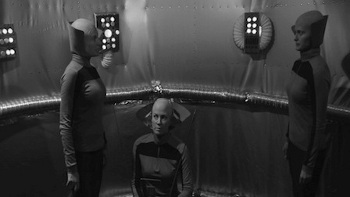 My biggest surprise was the miracle of locations we were able to shoot in for free in our “no budget” New York City movie. They were of course all simultaneously open for business, and part of shooting in this vein means that you have to be willing to work in a stop-and-start fashion. First we had asked if we could shoot a day in the stationery store. Then that day turned into two, three, five, seven days… They always said yes, and it always surprised me. Especially after some time went by between the main shoot and our pickups, and the owner teased me with the fact that Ugly Betty had offered them more than $3,000 to shoot there for a day. I thought, “We’ll never get back in now,” but sure enough, they let us back in.

We also had a scene which required a revolving dessert tray. Once ubiquitous in the city, now there seemed to only be two, one in a conveniently located Manhattan location with shitty sight lines, and the other deep in Bensonhurst on the outskirts of Brooklyn. Nervous about shooting there, we were once again welcomed past our wildest dreams. When it came time to eat our meal there (a traditional thank you when you “shoot for free” at restaurants), they insisted that we didn’t pay for it. Here we were, we had been staging a scene all day with two bald headed women who were touching each other’s noses romantically while blocking the front entranceway from their customers — of course it follows that our meals would be on the house!

My surprise at their generosity reminded me of one of the great things about shooting “no budget” film. There is an aspect to it that is of course brutal, but one of the things about it that is so great is that you are so stripped down to the essentials. There is nothing —  not people, not machinery — blocking anyone from a very intimate witnessing of the creative impulse. And since it’s clear that we are not creating these movies for the status, but rather out of a kind of love, it causes people around to respond with the same generosity.