WHICH COMES FIRST? THE CHARACTER OR THE WORLD? 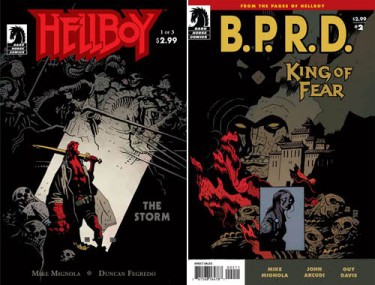 In film we are used to starting with the character (the protagonist who faces conflict in order to achieve his goal) or simply the concept (which usually yokes together the bare bones of character with a simply stated narrative). But what if you started elsewhere — with, for example, the world?

Mike Mignola is creator of Hellboy and the new Baltimore and a visual consultant to director Guillermo del Toro on Hellboy, Hellboy 2, and Blade 2. From an interview at BLDGBLOG titled “Ruin, Space and Shadow.”

BLDGBLOG: … Have you ever found yourself in a situation where a setting that you’ve devised for a certain storyline simply doesn’t work for Hellboy, say, so you have to use—or even invent—another character, or an entirely different plot, in order to use the architecture? In other words, how does setting—that is, how can architecture—affect plot and characterization, and vice versa?

So I came up with the Baltimore novel—and, now, the comic—to address that. In fact, in an upcoming issue of Hellboy, I do have another character who I’ve tied to World War 1—so, again, we return to the World War 1 battlefield.

In a lot of cases, though, I am creating characters in order to see these places—these times, these settings. But, from the very beginning, I’ve known what kinds of stories I’ve wanted to do—so it’s also a question of finding the character who belongs to that world, as an excuse to draw that world.