by Webadmin
in Filmmaking, Post-Production
on Feb 18, 2011

There are two barely related images that repeatedly come back to me as I begin to write about Port of Memory (2010) by Kamal Aljafari. One is a house cat languishing on top of a television set, in a family’s living room. The TV is playing a dramatization of the life of Jesus. At first the cat appears inert; the viewer is unsure whether it is an odd piece of bric-a-brac or a living but particularly lethargic mammal. The camera lingers long enough to confirm the latter. The second is a short stretch of Jaffa streets. An Israeli man singing in Hebrew a song (which ironically expresses the memory of Palestinians) morphs into Aljafari’s uncle walking down these same streets. The same streets which we see again through brief snippets of the Chuck Norris action classic Delta Force (1986). All of these moments inhabit the same physical space and image. 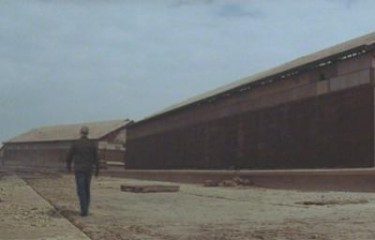 At the center of the story of Port of Memory – which is playing at the Maysles Cinema through February 20 as part of the “Documentary in Bloom” series – is a dispute over the ownership of a house. The state claims its inhabitants are squatters. Its inhabitants claim they legally purchased the house over 40 years ago. Pertinent documents have been lost by a perhaps less than scrupulous lawyer who never appears and is only heard from off-screen. Competing claims, layering of memory, indeterminacy of truth, precariousness, uncertainty; these ideas frame the second image, the streets of Jaffa, created and recreated through the lens of the action film, the song and finally (and always) the filmmaker himself portraying a paradoxical, true staging. However this rich scenario and presentation, engaging questions of history, memory and fact, is in Aljafari’s words, “just an occasion to enter into the life of my characters, their daily life and rituals.” This is a second kind of documentation then, a second presentation of a different kind of fact and the kind that is bound up in the cat sequence. It is merely a moment in the ritual and material life of a family. When I had chance to ask Aljafari about that particular cat sequence he replied, “I saw the cat sleeping on top of the TV, and I found it funny, it was part of the daily life of this family, Jesus, the cat and the TV.”

This then is the goal of the work, the reproduction of a different set of facts, a different kind of facts. It can be considered either a function or a byproduct of cinema to produce memory. One way or another, and beyond even firsthand experience, I will be not be able to un-remember Aljafari’s images of Jaffa and their intimate connection to the daily rituals of this one family; hand-washing, TV, cats, folding blankets, watching wedding videos. This establishes a counter-history not only in the sense of a competing narrative of ownership but as something that is counter-historical. The slow elegance of the hand-washing is a fact unto itself. Does it testify to ownership or a political narrative? It is difficult to appropriate as a ‘historical fact’ and yet it challenges the legal-historical alliance on questions of ownership and politics. Someone lives here. This is what living looks like. In an interview with Montreal Serai, Aljafari lamented, “I wish I could just have the washing of hands in my film in their actual length and rhythm, which lasts much longer than in the film.”

There is a sequence in the film which follows an Israeli film crew filming what appears to be a documentary about a neighbor’s house. Aljafari’s camera focuses on the cameras of the film crew and its director as he repeatedly attempts to get the subject to emphasize his role in creating the house. “Ani! Ani!” [I!, I!] the director admonishes. The subject seems less certain of this emphasis than the director. The audience is unclear. Is Aljafari documenting fabrication, confusion or simple amateurism? In the same interview with Montreal Serai, he says this was inspired by an encounter with a man in Ramle. Aljafari was filming a series of balconies for a previous film and an Israeli man responded, “you see all these balconies, they are mine.” The thought that occurred to Aljafari upon hearing this was, “Obviously, the balconies were much older than him.”

Claims like this and films like Delta Force, shot on the streets with Jewish Israelis portraying Arabs, seem to, in Aljafari’s mind, make a claim like the director is pushing the man to say in the film, ‘I made this. This is mine.’ It puts a stamp on the geography. It creates an uncertainty that people then inhabit. Aljafari told me that the film “is about being in a limbo and living in an uncertainty, which is the situation of almost any Palestinian.” And yet Aljafari’s film is also a stamp. It turns the logic of the Israeli song of home, memory and loss sung by a Mizrahi Jew on its head into a Palestinian song, clearly and obviously. No certificate of ownership required. It is easy for us to think in the counterfactual, that is, in fantastic history. This maintains the dominance of legal, historical fact in place. But it is difficult to think in the counter-fact. The daily life, the material things, the rituals that we see in Port of Memory are counter-facts. The disembodied and then re-embodied Israeli/Palestinian song is a counter-fact. There are truth claims being made that simply cannot sit with history or with historical facts.

Marc Nichanian writes in his recently translated work, The Historiographic Perversion, of the need to think of testimony and of narrative without the reduction to merely “provide proof or establish facts.” Writing of the horrific experiences of Armenians in the waning days of the Ottoman Empire, he says, “They wished for their testimonies to be archived, so that the word fact could preserve some sense for civilized humanity. And they were wrong. They were powerless. Their obsession, which aimed at the archivation of testimonies, had only one consequence, a truly catastrophic one: the disowning of their memory; the transformation, grave, and never to be undone of the ‘mnemogenic’ narrative into a discourse of proofs…”

Port of Memory resists precisely this obsession. It establishes counter-facts. It presents testimonies that do not participate in a discourse of proofs. There is a collapse between fictional story telling and documentary testimony. Here is a testimony of a disappearing world of Jaffa that persists in its truth as opposed to its facticity. There is an uncomfortable elision between the universal and the local in house cats and hand-washing; non-historical counter-facts, as it were, that stubbornly refuse to go away. — Ajay Singh Chaudhary

Port of Memory plays at the Maysles Cinema in Harlem through Sunday, 2/20/2011.