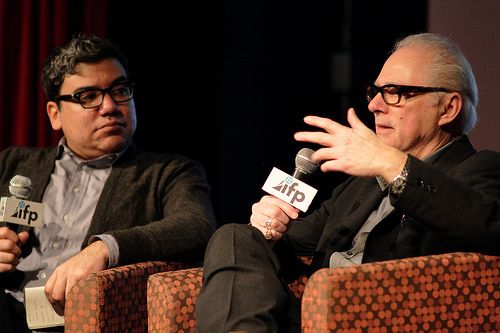 by Mary Anderson Casavant
in Filmmaking
on Mar 7, 2011 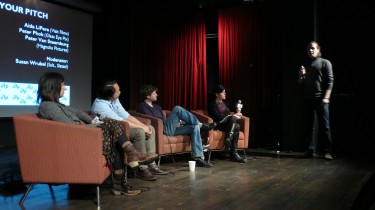 Ah, there’s nothing quite like the smell of pitches in the morning. This past Saturday, the IFP kicked off its annual Script to Screen Conference with five brave writers pitching their scripts to a panel of producers and agents.

Although all the panelists agreed that it was useful for writers to compare their projects to other films (a practice known as “using comps”) Peter Van Steemburg, the Director of Acquisitions at Magnolia Pictures, warned against using obvious ones such as “Juno or Napoleon Dynamite,” recommending that if you are pitching something that’s a lot like another movie, you should “immediately say how yours is different.”

Aida LiPera, Director of Acquisitions for Visit Films, encouraged one of the writers not to get lost in the details and to instead focus on “the major conflict” and “the high point” of his story. The panelists emphasized the importance of being specific when it came to both budget and casting ideas. Producer Peter Phok of Glass Eye Pix even recommended coming to a pitch with “visual material,” stating that he “loved it when pitches have art come with it.”

Next up was a case study of Borderline Films, the team behind the recent Sundance favorite, Martha Marcy May Marlene, directed by Sean Durkin and produced by Borderline’s Antonio Campos and Josh Mond (and exec produced by moderator Ted Hope). After meeting as undergraduates at NYU, the trio quickly realized they all shared a common goal: to use the program as a launch pad for a fully functioning production company. While still in the program, the trio were all set to produce their first feature, only to have funding fall through at the last minute, an experience Campos called, “a huge blow.”

The trio kept working, eventually producing Afterschool (directed by Campos), which premiered at Cannes. Hope praised the filmmakers’ “willingness to fail” and cited it as a major reason that trio was able to “move beyond the page.” Mond explained their all for one and one for all production model: when one of the trio is writing, the other two are busy making “commercials and music videos so the other doesn’t have to worry about the company and just focus on their writing.” Campos praised Mond as “the driving force behind the company,” whose chutzpah and belief that “if you will it, it will happen,” had kept the company alive.

The audience was then treated to a live reading presented in partnership with the Nantucket Film Festival. After having selected scenes from their scripts read aloud by actors, alumni of IFP’s Emerging Narrative program, Jonathan J. Johnson and Erin Greenwell, were given feedback by producers Amy Hobby (Secretary) and R. Paul Miller (Snow Angels, Lone Star). Hobby warned the writers against long descriptions, saying that it was “better to intersperse them.” Miller cautioned against writing characters whose way of speaking was “very similar” saying he liked dialogue that was “the perfect expression of that moment.” Both producers stressed the importance of complex characters with Hobby stating that she was always on the lookout for a character who “might believably do something unexpected.”

After the lunch break, the audience reconvened for a conversation between Mark Heyman, the writer of Black Swan and Eric Kohn of indieWire. Heyman, who started out as the assistant to Black Swan director Darren Aronofsky, recalled how at first he was intimidated by writing about ballet, a subject he knew nothing about, but after spending months observing rehearsals at American Ballet Theater, “stuff rose to the surface, and I started to understand what was needed to make a story.”

Conceived from the beginning as a “horror thriller,” Heyman spent a lot of time working on how (SPOILER ALERT) to “take a character on a journey that ends in her death but that’s not just a bummer. We had to find the transcendence in it.” Asked if he ever planned on directing, Heyman demurred, “it’s hard because I’ve gotten to see behind the curtain and see how hard it is… The advantage to being a screenwriter is that you get to work on a number of things all at the same time so it hurts less if it doesn’t move forward. As a director, you really are committing to one thing.”

A panel discussion on New Platforms for Writers encouraged the audience to ask not what the web can do for them but to ask what they can do for the web. Susan Miller, a longtime television writer and co-writer of the WGA award-winning web series Anyone But Me, encouraged writers to stop sitting around waiting for someone to say yes and instead look upon the web as a chance to “really own” your material, saying that although “it is not a time yet for most web series where you can sustain a living but there will be.” 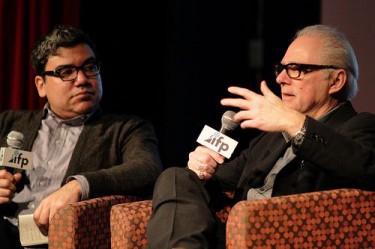 The day ended on a rather legendary note with a conversation between Film Society of Lincoln Center’s Eugene Hernandez and the writer and director Barry Levinson, the director of Diner, Avalon, Good Morning, Vietnam and Rain Man (just to name a few.) Levinson emphasized the importance of character, saying that he learned how to write by working at an acting school in Los Angeles, “I didn’t have any training for how you write a screenplay. My writing evolved from character. Once you connect to the character, then you begin to hear them. Structure has to evolve through characters.”

Something of a Hollywood iconoclast, Levinson encouraged writers to pursue projects that “seemed interesting” saying, “I never functioned by trying to figure out how I could maintain a level of success.” He told the audience to gird themselves for what is a highly erratic and highly emotional business. He laughingly recalled how Diner was pulled from major release by the studio because “it didn’t fit the model of what would sell.” The studio changed its tune once the picture got a series of great reviews during its New York release and started selling out theaters. Levinson shook his head, recounting his great sense of joy at learning that audiences actually liked his movie. It was a sense of relief the aspiring writers in the room could only imagine.