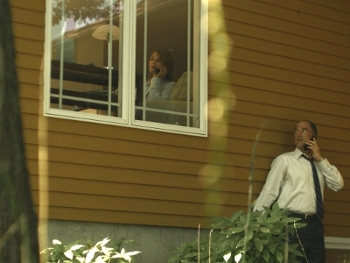 What do you want from a film experience? If I am going to schlep into Manhattan and pay money for a ticket I want the large-screen experience to be something specifically cinematic. I don’t need any William Castle-like “transmedia” gimmicks or 3D to prod me into the seat. I just need to know that I will be in the hands of a director who understands that narrative cinema can operate in a space far beyond the mechanics of plot and dialogue. Eric Mendelsohn’s 3 Backyards is that type of film.

3 Backyards is a truly ambitious and inventive work that speaks not only through acting and plot, but through Mendelsohn’s savvy directorial control of music, lensing and pacing. The film’s stylistic choice of ’70s-era American New Wave grammar is a joy to behold on the big screen. I can’t remember the last time I saw so many lens flares and long slow rack zooms. The narrative moves at a pace that recalls the best of those Euro-influenced American New Wave films from the 1970s that were allowed, for a short time, to explore oblique themes through small dramatic events. Everything from the ending of Easy Rider to the Beckett-like Westerns of Monte Hellman (The Shooting, Ride in the Whirlwind) through Altman’s Three Women reflected both filmmakers’ and audiences’ willingness to embrace the pursuit of realms beyond literal logic. But perhaps the film that 3 Backyards most reminds me of is Alan Rudolph’s rarely seen Remember My Name.

3 Backyards follows several characters in a suburban community as they go about their day. Peggy (Edie Falco) is an outgoing social bee who decides to help out the town’s big celebrity actress (the always pitch-perfect Embeth Davidtz) by giving her a ride; John (Elias Koteas), going through some midlife marital stress, starts off his day leaving for a long distance business trip but he never actually gets past his local coffee shop. His wife, played by Kathryn Erbe (who I’ve loved in all her stage roles), is left at home trying to decipher his cryptic and evasive behavior. Along the way, he finds himself drawn to a young immigrant woman in a blue dress (Danai Gurira). Rounding out the cast of characters is John’s young daughter Christina (Rachel Resheff), who steals some jewelry from her mother and then wanders off into the darkest corners of the neighborhood’s ominous, shaded backyards, only to come face-to-face with a menacing figure (Wesley Broulik). What unites these characters is not the typical grand climactic event found in such films as Short Cuts (the earthquake), or Magnolia (the raining frogs), or Crash (duh, the crash). Here, they are held together through the filmmaking and the resilient faith of the filmmaker, who is confident enough to allow these small observational moments to accumulate and find their own meaning, within themselves, without recourse to bombastic plot machinations. It may not be your cup of tea — especially if you like grand, puffy statements about the state of mankind (ala Biutiful). But if you are happy with true small moments held together by the play of light rather than through plot twists, then you should see 3 Backyards.

One element that has posed a distraction for many viewers is the film’s score (by composer Michael Nicholas), which is featured as a major character in the film. It is a 20th-century, slightly dissonant flute score with an inquisitive tone rather than the typical film music which declares loudly the emotion you should feel at specific plot points. The real problem with this type of choice is that audiences have been brainwashed by decades of limp uninspired music by Hollywood hacks like Carter Burwell so that when they finally hear a score used in an inventive way they are completely confused. It’s not the music they don’t like, it’s that they are uncomfortable watching a film that doesn’t hand them the emotions and themes on a silver platter. Scores like this and Jonny Greenwood’s for There Will Be Blood are designed to get you to interact with the film rather than sit back and get hit over the head with the specific emotion the scene is designed to convey. The spirit of 3 Backyards is mystery, and Nicholas’s score, which resembles at times one of my favorite flute pieces by Debussy, “Syrinx,” is intended not to answer your questions, but encourage them.

It is not the big dramatic moments that mark most people’s lives. It’s the small beats, those we often experience alone or that go unspoken between two people, which make up the true fabric of our days. That is the point of 3 Backyards. One could make the argument that the stylistic choices employed by Mendelsohn — the rack focus zooms, the dissonant music — provoke viewers in a way that they are then unable to find the meaning in these small beats. One might mistake the booming, mysterious music as pointing to something even bigger or more dramatic (as opposed to something smaller and more internalized). It’s this disconnect between the grammatical style choices and the theme where 3 Backyards may stumble. But nevertheless, it’s a fantastic film full of great moments and insights that are rarely experienced anymore on the big screen. This is the perfect example of why I always prefer a cinematic, ambitious, and honest film that may have some flaws to a seamless passive viewing experience. Eric Mendelsohn is the only director to win the Sundance directing award twice (his first time was for Judy Berlin). 3 Backyards is deserving of that award and well worth your theatrical dollars.

[Filmmaker has partnered with our friends at Hammer to Nail for a weekly “Pick of the Week” post that will be exclusive to our newsletter and blog for a long weekend, at which point it will go live over at Hammer to Nail as well. In the meantime, be sure to visit www.hammertonail.com for more reviews and lots of other goodies.]