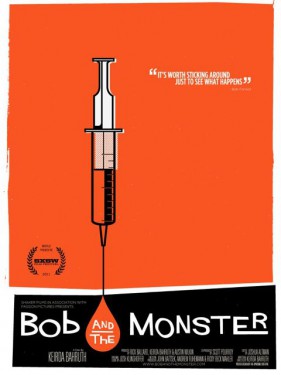 March 10th 6:55 AM. Right now I am on the plane headed to Austin for the premiere of my film, Bob and The Monster. As legend would have it, the film is in fact, in my purse. I didn’t plan for it to happen this way, I wanted to ship it on time and swore that I would, but that was not to be. So here I sit staring at this big HD-CAM that represents the last six years of my life.

I’m very proud of this film and very happy to finally share this story with everyone. Bob Forrest is a special guy, not a saint, not super human, just a very cool, interesting, special guy and it’s an honor to be the one bringing his story to the world. I can’t think of a better place for it to premiere as well. SXSW! Great films and rock and roll. What could be better than that? This will be my first time at this festival and my first festival attendance as a director so I’m not sure what to expect other than what I’ve heard. That the audiences are the best, the BBQ rocks and the weather is great!

The plan is to head to the convention center when we arrive today so that we can get our badges before the rush tomorrow. Then it’s time to shop for some kick ass cowboy boots — gotta look good! And then back to headquarters for some strategic planning of the next nine days. Our premiere is on Sunday so we have a few days to settle in and get our bearings, meet some other filmmakers and watch their films. I’m honestly as excited to see the films that are playing as I am to show the one we made.

3:37pm March 11th. Just got back from the filmmakers lunch at Troublemaker Studios with my partner in life and film, producer Rick Ballard. What an exciting afternoon! Robert Rodriquez gave a little talk about the difficulty of filmmaking and how proud we should all be for making this far. Hell yea, I feel proud! Exhausted and proud. So exhausted in fact, that we forgot to bring our business cards so I was writing our information on random pieces of paper that I could find on tables. Regardless of my slight oversight, it was so great to be in this creative space being shared by other filmmakers screening their films at the festival. We got to mingle and chat about our film and listen to others speak about their films. It really creates a greater interest to go to their screening as well. I did extensive research about all the films playing at the festival so it was fun to put faces on the films I had read about. We shared a table with the makers of It’s About You, Press Pause Play and The Other F Word. All films that I had circled to check out during our stay.

So now I’m back at our headquarters combing through our schedule and making sure we have time and space to keep all the commitments we just made. Our premiere is still two days away so I’m still feeling pretty calm about the whole thing. I thick I have a normal amount of nerves attached to the first screening. I think I’m more nervous about the following Q & A then I am for the actual screening. This will be my first experience with a Q & A as a director so I have a large amount of anxiety about it! Thankfully Bob Forrest and my awesome producers will be on hand to answer questions at well. Wait…will there be questions? God, I hope people are interested in asking questions! Jeez, I hadn’t thought of that before. Ok, scratch my prior comment about being calm.

Robert Rodriquez said something really great at the luncheon today. He said, “You had a dream and you made that dream happen. You convinced people to believe in you and then eventually your dream became the dream of others.” This really moved me because the people that have helped me make this film happen, my producers, Rick Ballard, Austin Wilkin, Scott Pourroy, our editor, Josh Altman, these guys and so many others became apart of my dream and I want so badly for our dream to succeed and be well received. We’ll know soon. 48 hours to go…